Money talks, and when it does it tells Corn Bank how much CO2 their purchases pump into the atmosphere; Corn then offsets those emissions with money from its ad budget – generating, it hopes, both goodwill and good behavior on the part of its customers’ We caught up to the offsetters in the halls of COP17 in Durban. 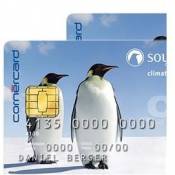 Money talks, and when it does it tells Corn Bank how much CO2 their purchases pump into the atmosphere.  Corn then offsets those emissions with money from its ad budget – generating, it hopes, both goodwill and good behavior on the part of its customers.  We caught up to the offsetters in the halls of COP17 in Durban.

8 December 2011 | Durban | In economics 101, you’re taught that there’s no such thing as a free lunch. But Swiss Corn Bank Group hopes its new carbon neutral Climate Credit Card will prove your professors wrong.

This week, South Pole Carbon Assets Management – whose carbon offsets back up the card’s carbon neutral claim – launched the Climate Credit Card for businesses. A consumers’ version has been available for a few months.

The idea? To bring card users closer to carbon neutrality at the point of purchase instead of relying on them to retroactively offset their consumption. And it comes at no cost to the cardholder.

“For the first time, you get a sense of the connection between your daily spending and your carbon footprint,” says South Pole CEO Renat Heuberger. “And you don’t have to create a profile and log in anywhere to participate.”

Heuberger is talking about the card’s built-in feedback mechanism: cardholders receive an annual statement that describes the footprint of their purchases. He says the bank may one day consider monthly carbon statements if there’s enough uptake of the service.

Once a cardholder’s purchases have been quantified in CO2 terms at year’s end, Corn Bank will purchase and retire the appropriate volume of carbon offsets on their behalf. The offsets are paid for with the average 1 % of marketing dollars that would otherwise fund a “points” or travel reward program.

The new credit card is launched against the backdrop of a growing trend among corporates that are picking up the slack for individual offsetting. In 2010, individual offset purchases made up a mere 1 % of offset transactions worldwide.

This low uptake has been blamed on everything from the fact that EU residents already bear the pass-through cost of compliance from national GHG regulations, to the sometimes controversies associated with offsets, to the financial crisis.

“The financial crisis makes people afraid to spend, and one of the things you cut early is offsetting if you’re not seeing the benefit of it,” Heuberger points out, adding, “In the last couple of years, our industry has not done a very good job of communicating the benefits of offsetting.”

So in response, corporates are experimentally communicating their carbon consciousness by embedding the cost of carbon credits directly into services and products that they offer to their clients and customers.

This approach varies from traditional carbon neutral products since corporates are tackling offset purchase decisions that were once the responsibility of individuals. Like offsetting airline travel or – in the case of the Corn Bank Card – everything.

Their motivation is behavior change.

“Embedding carbon into products simply shows people more clearly what the benefits are,” adds Heuberger, “because they see that everything they buy has an impact on the climate.”

The Carbon Value of Money

Rather than calculate the infinite combinations of purchase items, possible manufacturers, length of product supply chain, etc., South Pole’s Heuberger says the tool groups purchased items – from flights to handbags – into 10 categories with varying emissions factors. The cardholders’ CO2 impact is then estimated according to the price tag.

For example, suppose a cardholder purchases a plane ticket. For this emissions category, South Pole obtained information directly from airlines looking at the cost of various airline tickets, the number of tickets sold in each booking class and the airline’s total CO2 emissions. From that, they determined the average cost (in cash and CO2) of each type of ticket.

While it’s not as exact as entering detailed flight information into an online carbon calculator, he acknowledges that “of course we lose a little bit of exactness, but we win a lot of people.”

For example, earlier this summer ENDS reported that for most EU-based airlines, less than 1 percent of their customers chose to offset their flights. Just recently, British Airways – which reported a 3 to 4 percent offset program uptake – dropped their customer offsetting program in favor of making charitable contributions to the UK Carbon Reporting Framework.

While this could be the result of waning consumer interest in offsets, an article from GreenAir Online points out that sometimes the problem isn’t the product but the delivery.

A case in point is a program launched this year by TUI Group (owns Thomson Airways) where ticket purchasers have the option to opt out of an additional fee to offset their flight. Otherwise, TUI automatically adds an additional $1.60 to their ticket cost.

Under this model, 30 percent of ticket holders have chosen to offset their flight and the program has so far raised $11 million since 2007.

Similarly, the Climate Credit Card places the onus for offsetting on the credit card issuer – Corn Bank – which in turns benefits from reaching a new segment of carbon conscious consumers.

Your Feedback is Welcome and Appreciated

While the Climate Credit Card is low-commitment, designers hope that cardholders’ annual carbon statements based on their purchases will inspire behavior change.

Examples of this kind of subtle behavior trigger are found most often in the electricity sector, where utilities are experimenting with programs that disclose the carbon footprint of one’s household alongside the neighborhood average – on each household’s monthly electricity bill.

Some programs are more competitive than others, but most report positive results. Recently, a year-long energy savings competition sponsored by the New York State Energy Research and Development Authority and Con Edison saw one resident reduce her household footprint by 49 percent in one year as a result of the program’s descriptive CO2 usage reports.

Corn Bank has committed to administer the Climate Credit Card for at least three years. The card will be available primarily for Swiss bank customers, but also in neighboring countries like Germany, Italy and France.