As California’s cap-and-trade program scales up, so does the risk of seeing offsets go sideways if the underlying projects fail to deliver. Now it’s possible for offset buyers to protect themselves from that risk by purchasing an insurance policy. 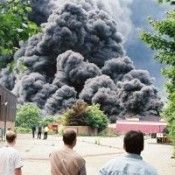 As California’s cap-and-trade program scales up, so does the risk of seeing offsets go sideways if the underlying projects fail to deliver. Now it’s possible for offset buyers to protect themselves from that risk by purchasing an insurance policy.

30 May 2013 | The Climate Action Reserve (CAR) is partnering with an insurer to mitigate the risk of invalidation for ozone-depleting substances (ODS) and livestock offsets bound for California’s compliance market.

The CAR has formed an exclusive alliance with specialty insurer Parhelion Underwriting Ltd to insure against invalidation of offset credits that are transitioned from credits originally issued by the reserve to California’s cap-and-trade program.

The coverage is designed to remove a key obstacle for California compliance offset transactions: the buyers’ liability provisions featured in the California Air Resources Board’s (CARB) regulations governing the cap-and-trade program. The provisions allow the CARB to invalidate credits that are found to be faulty or fraudulent and require regulated entities to surrender replacement offsets for compliance.

Parhelion CEO Julian Richardson said the parties understand why the CARB included the buyers’ liability provisions, but they have “created a significant issue for market participants.”

The insurance policy would indemnify the owner of the offset credit for the replacement cost of an invalidated offset. The insurance should be set based on the future cost of replacement rather than the current price of offsets as these costs could be higher at the time of invalidation, Richardson said. “It’s up to the insured to select what that limit should be,” he said.

Parhelion is initially focusing on ODS and livestock methane projects issued through CAR as there are complications with the invalidation rules as they pertain to forestry projects, Richardson said. “Once we have further certainty, we will certainly be looking at the forestry projects,” he said.

The insurer would also be willing to expand the coverage to other project types such as coal mine methane and rice cultivation that the CARB is considering, Richardson said. “We don’t see why we wouldn’t make policy available for those types of projects as well,” he said.

The policy can be purchased by the project developer or the buyer of the offset credits and could help increase liquidity in the market, Richardson said. California’s investor-owned utilities are not allowed to assume invalidation risk, but by removing the invalidation risk with an insurance policy, Parhelion hopes to see these potentially large buyers of offset credits participate in the market, he said.

The invalidation risk has led to the emergence of different types of offset contracts, including a product in which sellers retain the risk rather than transferring the exposure to their buyers, known as “Golden” California Carbon Offsets (CCOs), but these offerings are “very inconsistent,” Richardson said.

The premium rates for Parhelion’s policy would be set on a dollar and cents per ton basis that varies based on factors such as project type and the experience and history of the developer, but good projects with reasonable limits likely would be quoted a rate of about $1/t, which is within the spread between allowances and Golden CCOs, Richardson said. “This is a significant reduction in costs we’re able to deliver to offset sellers,” he said.

The CAR will not receive any proceeds from the insurance policies, simply continuing its traditional role of analyzing projects and issuing high-quality credits, Richardson said. “They are the first line of defence of risk assessment for the projects,” he said.

But the CAR expects its customers to see a discount in insurance premiums compared to other registries if Parhelion expands its coverage beyond the reserve, given the CAR’s expertise and risk assessment of these projects, said CAR President Gary Gero.

The regulations allow the CARB to invalidate credits subsequent to issuance if the regulators find the project to be in regulatory non-compliance or if the project is registered elsewhere, he said. But the more likely scenario for invalidation involves a material misstatement in the number of credits that have been issued, defined as an error of more than 5% of the total issuance, Gero said.

Gloria Gonzalez is the Carbon Associate in Ecosystem Marketplace’s Carbon Program. She can be reached at [email protected]