Low-impact tourism – classic "ecotourism" – has become a reliable niche within the global tourism trade, but it’s nothing compared to mass tourism that brings hundreds of millions of vacationers to oceanfront resorts around the world.  Now savvy environmentalists are tapping the trade to fund the preservation of ocean ecosystems on which it depends. 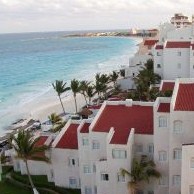 Second in a series

Hey… what happened to the sand?

After focusing on tourism while turning a blind eye to the beach’s underpinning ecosystems for more than three decades, Cancun and its celebrated white sands are washing away. This Caribbean barrier island became a veritable who’s who of five-star hotels with the Ritz Carlton, the Hyatt Regency, the President InterContinental and a host of others squeezing for space across the entire 12-mile sandbar.   Now it is so bogged down by development that it can no longer withstand the seasonal ebbs and flows of its native sands.

Some scientists say it may be too late to restore Cancun.   Its degradation is so severe it spawned a new noun: the “cancunization” of marine coastland.

Tourism caused the problem. And tourism could offer the solution for similar vulnerable coastal vacation spots around the world and the threatened marine species they host, before the degradation becomes irreversible.

The tourism industry could fund payments for ecosystem services to underwrite and insure its investments.   And by harnessing private-sector investment, billions of dollars worth of vulnerable yet valuable marine and coastal ecosystems could avoid Cancun’s fate, says a growing group of governmental organizations, environmental groups and non-governmental organizations.

Coral reefs, mangroves and sea grass beds that naturally form and maintain beaches do not count among the sexy stuff the tourism industry focuses on.   Yet they provide essential ecosystem services upon which the industry depends.   They buffer storms, prevent beach erosion, and provide homes to the thousands of fish, sea turtles, lobsters and starfish that tourists, diners and recreational fishermen expect to enjoy on their visits to the beach.

So far, no one has offered to foot the full bill for their preservation.   After all, coastal conservation management is expensive, and waterborne patrols cost significantly more than land-based police.

Businesses in lesser developed countries have been happy to pocket the influx of tourist dollars.   But with limited government coffers they have been hard-pressed to finance environmental protection.   Meanwhile, conservation NGO’s typically lack the funds needed to carry the full weight.

Currently, between US$2 and $3 billion per year are spent on protected areas throughout the world, according to statistics provided by Conservation International.   But the amount needed to adequately protect most of the world’s threatened biodiversity has been estimated at between two and 20 times that amount – this according to Barry Spergel, an international lawyer and environmental consultant who cited them during a roundtable discussion at the Hague Conference on the Environment.

Tourism is one of the world’s largest industries, employing over 220 million people and generating more than nine percent of the world Gross Domestic Product (GDP), according to the World Travel and Tourism Council. International travelers spent over $500 billion US dollars last year alone.

Tourism as the White Knight

Coastal communities began drawing on dollars generated from ecotourism – loosely defined as tourism intended to promote ecological awareness and limit damage to the environment – to help fund their protection in the 1990s.   Examples abound.   Ecuador’s Galapagos Islands National Park, for instance, collects a $100 park entry fee from each of its annual 80,000 foreign tourists.   Australia charges commercial tourism operators $4 per tourist per day to explore its Great Barrier Reef.   The Caribbean island of Bonaire gets a $10 annual flat fee from scuba divers to protect its coral reefs and coastal environment.

But ecotourism with its snorkelers and rain forest explorers accounts for only 20 percent of international travel, according to the World Tourism Organization.   Agardy says that, to generate significant funding for coastal conservation and marine management, the mass tourism dollars of sunbathers and pina colada sippers must be tapped.   This could be achieved by creating flexible mechanisms that include direct payments, offset markets and payments for ecosystem services.

By harnessing these markets, tourism could become the white knight that saves marine ecosystems rather than the black knight that harms them.

“The conservation community considered the mass tourism industry the enemy,” says Agardy.   “Now we’re looking at the potential for partnering with mass tourism to find ways they and the environment can benefit.”

From Tourist Trap to Ecosystem Solution

Several tourist destinations already draw on mass tourism dollars to support ecosystem services.   Belize and the Republic of the Cook Islands require foreign tourists to pay a conservation fee when they enter or leave the country.   Some hotels in the eastern Caribbean and on islands off of Spain charge guests a tax directed towards ecological conservation and restoration.   And Maldives President Mohammed Nasheed announced in September a $3 a day green tax for all tourists of this Indian Ocean nation’s popular island resorts.

This existing foundation can be used to launch a multi-faceted ecosystem service approach that draws on tourism dollars to support threatened coastal areas.   For ecosystem service solutions to work, Agardy adds, they must be flexible enough to respond to the specific needs at threatened tourist sites.

Species banking and trading programs could help.   A resort owner whose development caused the unavoidable loss of protected turtle habitat could purchase credits from a species bank that promoted turtle biodiversity.   A marina project that unavoidably destroyed a patch of reef could purchase credits from a trading program that restored coral reefs.

The issues are complex, and effective strategies typically rely on government regulation paired with payment for economic service approaches. For example, Forest Trends is working with partner organizations to design a multi-tiered program along the coast just south of Cancun where hope for sustained tourism is all but lost.

The plan would benefit overall the much-stressed Mesoamerican reef that stretches from the Yucatan Peninsula to Honduras. Here, overfishing, as well as “over-zealous fishing” (tossing dynamite into the waters to quickly bring up fish) and coastal pollution caused by sewage and runoff are destroying the reef.   Forest Trends is investigating ways of using tourism revenues for marine management – paying fishermen not to overfish and subsidizing water treatment.

These new market mechanisms must be designed in a manner, however, that recognizes the significant risks that they come with, Spergel says.   An untold variety of unpredictable events such as hurricanes, terrorism and financial collapse could cause tourist dollars to dry up. Moreover, conservation may be beyond government and market control. In Mauritania, for example, where Spergel worked to create coastal conservation programs, boats operated by Senegalese pirates and prowlers caused far more damage to marine life than tourists and their cruise ships.   Ecotourism solutions require a flexible perspective that custom-tailors itself to locations, governments, markets and funding.

Unfortunately for Cancun, this barrier-island-cum-tourist-trap became a sacrificial lamb for ecologists wagging “I told you so” fingers at developers who, they say, should have known better than to build big on a barrier beach and remove mangroves in the first place.   It offers a clear example of what happens when the tourism industry pockets its profits without reinvesting in the ecosystem services on which the profits depend.

“We can’t do much about Cancun,” says Agardy who watched from her hotel in November as backhoes on beaches hoisted millions of dollars of borrowed sand pumped in from the sea floor and brought in from the banks of nearby islands. “But we can use creative ecosystem markets and solutions to prevent the ‘cancunization’ of the rest of the coast.

Alice Kenny is a prize-winning science writer and a regular contributor to Ecosystem Marketplace. She may be reached at [email protected]

Part Six, Marine Biodiversity, examines existing that provide an economic incentive to preserve natural habitat for endangered species on land, and provides a guide for adapting these schemes to the ocean.