Pollution from farm fertilizers and industrial facilities that flow into the Mississippi River has led to a huge dead zone in the Gulf of Mexico. Nutrient trading is one solution that can improve water quality in a cost-effective way for both industrial firms and farmers. 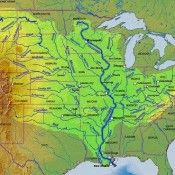 Pollution from farm fertilizers and industrial facilities that flow into the Mississippi River has led to a huge dead zone in the Gulf of Mexico. Nutrient trading is one solution that can improve water quality in a cost-effective way for both industrial firms and farmers.

This article was originally published on the World Resources Institute-WRI Insights-website. Click here to read the original.

8 May 2013 | The Gulf of Mexico has the largest dead zone in the United States and the second-largest in the world. Dead zones form when excessive amounts of nitrogen and phosphorous wash into waterways and spur algal blooms, depleting the water of oxygen and killing fish, shrimp, and other marine life. The Gulf of Mexico dead zone can range between an astounding 3,000 and 8,000 square miles. At its largest, it’s about the size of Massachusetts.

Reducing this growing dead zone problem is a huge scientific, technical, economic, and political challenge. It’s a conundrum that agricultural and environmental experts from across the United States have deliberated over.

One new approach that was discussed at the Gulf of Mexico Hypoxia Task Force meeting in Louisville, Kentucky last month is voluntary nutrient trading. According to a new study conducted by WRI staff for the EPA, this strategy could be used in the Mississippi River Basin to cost-effectively reduce nitrogen and phosphorous pollution and shrink the Gulf of Mexico dead zone.

What Is Nutrient Trading?

Nutrient trading helps to do just that by identifying the most cost-effective nutrient reductions possible to achieve specific local or regional water quality goals. As a voluntary market-based mechanism, trading helps regulated facilities (e.g., sewage treatment plants and industrial firms) find the cheapest way to satisfy nutrient pollution limits. Because all facilities are different, some will be able to install onsite technology upgrades at a lower cost than others to meet their nutrient reduction requirements. Unregulated farmers may also be able to voluntarily participate if installing conservation practices to reduce nutrient loads occurs at a lower cost than the regulated facilities’ cost. These facilities or farmers with low treatment costs can sell excess reductions, or nutrient credits, to the regulated facilities that face very costly upgrades.

Thus, nutrient trading offers a triple-win solution: Progress is made toward achieving the trading program’s water quality goal; credit buyers spend less on credits than they would spend on costly technological upgrades; and credit sellers make money for their extra pollution-reduction efforts.

Nutrient Trading in the Gulf of Mexico

Currently the Mississippi River Basin, a main tributary to the Gulf of Mexico, lacks a nutrient trading program. WRI recently used a hypothetical case study approach to assess the economic feasibility of using voluntary nutrient trading in this region. We found that it could serve as a cost-effective way to shrink the Gulf’s dead zone.

Some of our specific findings include:

A Pathway for Trading Nutrients

While nutrient trading could be a promising tool in the toolbox of solutions to shrink dead zones, it won’t happen on its own. Currently there is no nutrient reduction goal for the Gulf to serve as a policy driver for a nutrient trading program. We would first need this goal before there can be a real demand for nutrient trading.

Until such a driver materializes, several states in the Mississippi River Basin are developing voluntary State Nutrient Reduction Strategies. Nutrient trading could be included as part of these states’ plans to help achieve local water quality goals.

There are no silver bullets when it comes to dead zones. Nutrient trading programs can help alleviate some of the problem, but all major stakeholders in the Gulf of Mexico’s watershed-sewage treatment plants, industrial firms, the farming community, and city and suburban communities-have to agree to work together to improve water quality. A robust suite of tools-including nutrient trading-is one way to ensure that dead zones truly die off.

Michelle Perez is a Senior Associate on the Water Quality Team in WRI’s People & Ecosystems Program. She can be reached at [email protected]