Humans have impacted the Namib for millennia, but only now are their activities impacting ecosystems on a large scale.  That’s why the Ministry for Environment and Tourism commissioned a Landscape-Level Assessment for the Central Namib to help make sound decisions on economic development while retaining the desert’s special character and people’s livelihoods. 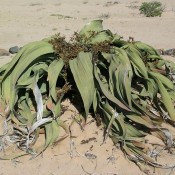 Humans have impacted the Namib for millennia, but only now are their activities impacting ecosystems on a large scale.   That’s why the Ministry for Environment and Tourism commissioned a Landscape-Level Assessment for the Central Namib to help make sound decisions on economic development while retaining the desert’s special character and people’s livelihoods.

10 January 2012 | Namibia’s ancient Namib Desert has been shaped by fierce sun and wind, and is characterised by an extensive ‘sand sea’ with exceptionally high dunes, the glaring gravel plains and moon landscapes.

The desert’s demanding ecological conditions have led to some peculiar and highly specialised fauna and flora – such as the large and diverse lichen fields flourishing near the coast due to regular fog events, the isolated communities of iconic Welwitschia mirabilis (strange cone-bearing plants, pictured above, that can live for hundreds of years and whose ancestors are believed to have been abundant during the Jurassic) and an intriguing diversity of tenebrionid beetles (more than 170 species), some with special physical and behavioural fog-harvesting adaptations that have even inspired the research and development of novel moisture-collecting materials in distant laboratories.

Rock paintings and archaeological evidence from different periods in history indicate that humans have been present in this region for several hundred thousands of years, but never have they impacted the environment as they are now as first diamonds and then uranium were discovered across the country.

The Uranium Rush and the Diamond Drive

Diamond mining began in the Southern Namib in the early 1900s and soon spread off-shore. The country is also rich in mineral resources, including deposits of copper, zinc, gold, and uranium.   The “Uranium Rush”, which peaked around five years ago and is centred on the fragile Central Namib, saw a surge in demand for large numbers of exploration and mining licences near and even inside the Namib Naukluft National Park, one of the country’s flagship protected areas.

The Government faced a dilemma: one of its main concerns is building a stronger economy to tackle persistently high levels of unemployment and poverty, so it wants to see these various resources developed as a priority, albeit within the framework of sustainable development.

These areas where mining is concentrated provide one of the cornerstones of the tourism industry, which is rapidly growing to become a significant contributor to the national Gross Domestic Product. Indeed, to conserve its rich natural and historical heritage, and to contribute to meeting its commitments under the Convention for Biological Diversity, Namibia has established an excellent system of statutory Protected Areas. When counting community-managed conservancies, which may well offer the potential for future Payments for Ecosystem Services schemes and for the delivery of biodiversity offsets or compensation, this means that around 40% of the total land surface is under some form of protection.

But mining is the mainstay of the economy, and the government’s position was not an easy one. In the end, the response to the “Uranium Rush” by commissioning a Strategic Environmental Assessment (the Uranium-SEA) for the Central Namib and placing a temporary moratorium on the issuing of new licenses until it was complete.   The principal aim was to assess the likely direct, indirect and especially the cumulative impacts of a range of uranium mining scenarios on the receiving environment and then to provide recommendations and actions in a Strategic Environmental Management Plan to inform decision-making and to help avoid and/or limit negative impacts on people and the natural environment. Initiated by the Chamber of Mines and then officially commissioned by the Ministry for Mines and Energy (MME), the U-SEA was – by all accounts – the first SEA in the world to be conducted for a mineral province.

Are Offsets Part of the Answer?

The situation in the Central Namib has raised important questions: How can the goals of biodiversity conservation, social well-being and economic development (e.g. mining development, associated infrastructure) be aligned, and is it possible to strike a balance?

These were some of the central themes explored in a national workshop in July 2010 on responsible development that takes place in the context of the mitigation hierarchy and biodiversity offsets and as supported by sound landscape level planning. The Business and Biodiversity Offsets Programme (BBOP, Forest Trends) together with Fauna and Flora International (FFI) organised and shared their collective experience with participants of the workshop, which was hosted by the Ministry for Environment and Tourism (MET).

In her opening speech, Minister of Environment and Tourism Netumbo Nandi Ndaithwah emphasised the timely nature of the debate, referring specifically to the potential for integrating promising developments in the uranium mining sector with mechanisms such as biodiversity offsets, in the context of the mitigation hierarchy, to ensure ecologically sustainable outcomes that take care of the natural ecosystems.

When interpreted together with a strategic assessment previously undertaken for the Namibian coastline, the Uranium-SEA helps to put the proposed developments in the Central Namib into perspective. The outputs highlight some of the social, economic and environmental costs and benefits associated with the mining developments – and with different scenarios that might be expected. The products also lay out risks and offer recommendations for mitigating these risks, including the need for further studies. This kind of information is critical for further sound planning and decision-making, though it is important to recognise that it is most effective at an early stage in any developments so as to enable strategic decisions.

A key issue raised in the Uranium-SEA as being in need of further investigation was the use of water in the arid region, and particularly the risk of unmonitored groundwater abstraction for uranium mining. A detailed study by the German Federal Institute for Geosciences and Natural Resources (BGR) and the Geological Survey of Namibia has now produced the first groundwater model for the Central Namib. This confirms experts’ concern around potential groundwater depletion due to increased use for mining in the region and the recommendation that alternative water sources (e.g. desalination plants) be used.

Biodiversity considerations were included in the Uranium-SEA primarily through an expert mapping process that identified preliminary areas of high biodiversity value. However, to validate and refine these areas and to provide a spatial decision-support tool, a Landscape-level Assessment (LLA) was commissioned by the Ministry of Environment and Tourism in the latter half of 2011. BBOP is collaborating in this FFI-led project along with several partners, including the Gobabeb Research and Training Centre, EnviroMEND, Anchor Environmental, and Hamburg University. The project’s approach follows systematic conservation planning principles and the team is currently using field data and consultations with specialists to classify and map biodiversity patterns (species, ecosystems) and key ecological and evolutionary processes across the Central Namib landscape.

This is a challenge given the many different facets of biodiversity characterising parts of the region. Large mammals (Hartmann’s Zebra, springbok and other antelope, desert elephants, even lions) visit the area – some stick to the dry river corridors while others opportunistically use patchy grass resources on the plains; flamingos and other migratory birds form massive, globally significant seasonal congregations in coastal salt pans and lagoons; Cape Fur Seals get together in large breeding colonies that linked with the inland desert through corridors of nutrient transfer. The Namib is also a scorpion and reptile enthusiast’s paradise. Endemism is high, especially amongst the invertebrates, and new species keep being identified. Just recently, another new species of gecko was discovered.

What Will the LLA Accomplish?

The aim of the LLA is to establish the conservation status and significance of the different biodiversity features that characterise the Central Namib and which are important for the integrity of the natural landscape. As it is impossible to identify and map every facet of biodiversity though, surrogate features are used to represent biodiversity more broadly. For example, vegetation types, as based on the state-of-the-art vegetation map that the LLA team is currently producing, can serve as good surrogates. The LLA will assess the vulnerability of these biodiversity features to a range of different mining-related development scenarios, and it will examine spatial options for different conservation outcomes, highlighting critical biodiversity areas, ecological support areas, and the potential for appropriate biodiversity offsets. In this, the LLA team is not working in isolation but together with many stakeholders, individuals and organisations in Namibia and elsewhere, who are contributing valuable data and expert advice.

In turn, the project endeavours to contribute meaningfully towards developing institutional, technical and resource capacities for utilising the final outputs expected in April 2012. Training and capacity building has already been started as part of the ongoing LLA project. This is envisaged to continue once the products are available for use by the various Namibian Ministries (e.g. MET, MME, Lands and Resettlement), the Erongo Regional Government, Municipalities, the mining and tourism industries, and the communal sector through NACSO (the Namibian Association of Community Based Natural Resource Management Support Organisations).

The intention of the LLA is to develop a sound information base in order to support integrated land use planning and decision-making and sustainable development in the Central Namib. Yet, decision-support tools are only part of what is needed to achieve this. And judging by the active national debate and the high level of collaboration amongst different players in the country (e.g. at the recent ‘Mining in Protected Areas’ Conference) most stakeholders and decision-makers seem to recognise this. While information and outputs from planning processes such as the LLA can certainly help align important project development with the unique natural desert systems and people’s livelihood needs, the ultimate choices and decisions that need to underlie such a balance remain in the hands of Namibian society.