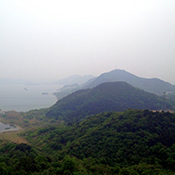 17 May 2013 | BEIJING | People’s Republic of China | On the hour-and-a-half drive to the Miyun reservoir from Beijing, you can’t miss all the trees. Recently-planted seedlings – mostly deciduous, with neatly painted white trunks – grow in orderly rows, stretching for miles, filling every spare patch of ground in the countryside. Trees have been planted in old agricultural fields, along the banks of rivers, and even in dried-up riverbeds.

In the age of climate finance, REDD, and forest carbon, it’s a little-known fact that the biggest afforestation program in the world is in China, and is actually driven by water, not carbon. The Sloping Lands Conversion Program, which has delivered billions of dollars to forests, is just the biggest of dozens of similar efforts that incentivize projects in China.

We’ll be spending the next three days by the Miyun reservoir, talking to experts from all over the world about how to build a better forest compensation model. The occasion is the 18th Katoomba meeting. Hosts Forest Trends and the Beijing Forestry Society have brought together more than 200 people in China – from countries from Peru to Switzerland to Ghana – to trade experiences, share lessons learned, and – this brings us to the reservoir – make recommendations to project developers at Miyun on designing and implementing effective watershed investments.

As much as 70 percent of Beijing’s surface water supply comes from the Miyun reservoir, but the water is disappearing. Surface flows have fallen by two-thirds over the last decade. Pollution is a growing problem and a bit of a moving target. There have been extensive efforts to implement soil and water conservation structures around the reservoir, but in the meantime other problems have appeared.

“Ten years ago I would have said erosion is the biggest problem in the Miyun reservoir,” Madame Duan Shuhuai, Professorate Senior Engineer at the Beijing Water Authority, told the Katoomba audience. “But now we are most worried about household garbage, wastes from animals and fertilizer.”

The communities surrounding the reservoir are much poorer than the nearby capital. Annual income levels in the area are estimated in official statistical yearbooks at $623/year, compared to the national average of $964. A recent rapid assessment in the field by Forest Trends partners put the actual number even lower – in the range of $228-407/year.

A History of Investments

Beijing municipality has aggressively backed a range of efforts to restore and create forests in the watershed, including “eco-compensation” programs that pay communities to plant trees. More than 18,000 hectares have been planted around the reservoir. Today, there is more than 70% forest cover in the area.

A GEF-funded project implemented by the Beijing Forestry Society and UNDP from 2007-2011 also worked to develop capacity in upstream communities for forest management, as a way to get more trees in the ground, provide alternative livelihoods (and thus in theory limit pollution) and build climate resilience.

Those efforts, said Sun Mingchen, Director General of the Fengning County Forestry Bureau in a Friday morning panel, were successful in many ways: they resulted in tenure being granted to private landholders and stressed participatory planning approaches.

But trees are slow to mature, Sun pointed out. In the meantime, landholders who have switched livelihoods from farms to forests find themselves with a production timeline that doesn’t match up with their income needs. “The delayed benefits from trees mean farmers need compensation in the period before trees mature,” said Sun.

Meanwhile, water risk continues to hover in Beijing. Pollution downstream reaches a grade 4 out of 5 (1 being cleanest), and yet information about the precise nature of pollutants or their sources is scarce: there is no systematic monitoring of hydrological indicators like flow rates or nutrient pollution levels.

Similarly, despite Beijing’s heroic investments, little is known about their socio-economic impacts. Are payment levels high enough to attract sufficient participation? Are the trees increasing flows into the reservoir, as expected, or actually contributing to the falling water levels?

The new proposed pilot in the Miyun reservoir aims to try to answer some of these questions. Project developers believe that a more rigorous understanding of hydrological and social impacts will improve design and ongoing management. And success in Miyun will help demonstrate that natural infrastructure will have an important role to play in safeguarding water security – and far less expensively than projects like the South-North Water Transfer Project, a massive infrastructure initiative to bring water to cities like Beijing the dry North from the Yangtze River more than 1,000 kilometers away to the south.

The pilot has the benefit of not starting from scratch: it already has a natural buyer (Beijing) and sellers (poor upstream communities) and builds on years of previous efforts to safeguard the Miyun reservoir.

Now, project developers hope to also build on years of expertise developing watershed investment projects around the world – which is where Katoomba conference-goers come in. They represent leading projects around the globe, as well as some of the most cutting-edge ecosystem services policy and project design experience out there. Over the next three days, they’ll be intensively briefed on the watershed and relevant subjects.

A major goal of the conference is to tap the collective wisdom of practitioners, policy-makers, and other actors, and develop a concrete set of recommendations for advancing the Miyun project. We can’t wait to see what they come up with.

This is the eighth in a series of stories offering coverage leading up to and during Katoomba XVIII: Forest, Water and People to take place in Beijing, China, on May 16 and 17. The meeting will gather leading experts, practitioners, policymakers, and investors from China and abroad to advance nature-based solutions to the water crisis for an urbanizing world.