Carbon trading promotes good behavior by creating a standardized currency representing a verifiable environmental benefit.  Payments for watershed services do the same for cutbacks in water pollution, albeit on a smaller scale.  Now, the Nature Conservancy and the Coca-Cola Company are experimenting with a new method of “water footprinting” that could do the same for total water use. 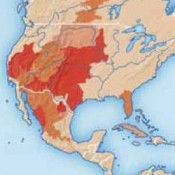 Carbon trading promotes good behavior by creating a standardized currency representing a verifiable environmental benefit.   Payments for watershed services do the same for cutbacks in water pollution, albeit on a smaller scale.   Now, the Nature Conservancy and the Coca-Cola Company are experimenting with a new method of “water footprinting” that could do the same for total water use – a key component in the development of a market-based scheme that would promote responsible water usage.

20 September 2010 | Anyone who’s ever squeezed a whole bag of oranges into a single glass of juice knows (at least intuitively) that a whole lot of water goes into that one little refreshing gulp – but would you believe 518 liters of water for just one carton of juice?

That’s the low-ball figure that the Coca-Cola Company and The Nature Conservancy (TNC) came up with after carrying out a “water footprinting” exercise on the company’s orange juice supply chain.   The figure takes into account the water pulled from the ground and sky to grow the oranges, the water pulled from pipes to make the bottles, all the water used in transporting the product, and the clean water contaminated by the whole process.   It also varies widely depending on where the oranges are grown — one brand, which takes oranges from Florida and Brazil, uses 651 liters of water for just one carton of juice.

The same exercise told them the company uses less than 70 liters of water to make one liter of their trademark dark beverage – at least when they’re producing it in the Netherlands using Dutch sugar beets.

Environmental groups like TNC can use this information to monitor corporate impact on the environment, and companies like Coca-Cola can utilize it to measure both their liability and total water needs.     That’s why the two teamed up, applying methods outlined in The Water Footprint Organization‘s Water Footprint Manual and its “footprint calculator” to two Coca-Cola products (orange juice and Coke) and one key ingredient (sugar from sugar beets).

They went public with the results of their footprinting exercise at World Water Week in Stockholm and published them in “Product Water Footprint Assessments: Practical Application in Corporate Water Stewardship”.

The question now is how to best use these types of reports; it could develop into the basis for a water trade system.   For now, companies are voluntarily utilizing it to establish more sustainable — and economical — water use practices.

Cutting Water on the Farms

When applied, these results can be used to monitor and respond to the areas of production that have the largest water footprint.

In the low-ball example above, for example, Coca-Cola found that the so-called “green” footprint from the farms they work with accounted for 319 of the 518 liters.   The “blue” footprint (factories and processing) used up 115 liters, and the “grey” footprint (pollution) was just 84.

To decrease these, the company, with its partner farms, will focus its efforts on developing more sustainable agriculture practices, according to Denise Knight, Coke’s Water and Sustainable Agricultural Director.

The Process of Water Footprinting

When Water Footprint Network’s manual is applied, corporations can develop better stewardship practices to reduce their water footprint — including the improvement of water use efficiency in the production cycle.

As in biodiversity markets and other offset-based schemes,   water footprinting isn’t cure-all for water-use issues.   Instead, the Water Footprint Network says the process should be used to reduce water usage to a bare minimum and then generate offsets “by making a ‘reasonable investment’ in establishing or supporting projects that aim at a sustainable, equitable and efficient use of water in the catchment where the residual water footprint is located.”

Coca-Cola plans to “safely return communities and nature an amount of water equivalent to what is used in all of our beverages and their production.”   In one area, the company established a partnership with WWF (formerly the World Wildlife Fund) to develop more sustainable practices in the specific areas of the agricultural supply chain.   To date, the partnership has led 19 cane farmers to adopt practices that increase fresh water availability in the Great Barrier Reef region.

Coca-Cola is not the first corporation to voluntarily release transparent reports about their water use; indeed, Pepsi Co. released one earlier this year.   Like Coca-Cola’s efforts, other corporation’s water footprint reports are mainly used as the basis for voluntary conservation and sustainability efforts.

Organizations like the Bonneville Environmental Foundation (BEF) are trying to assist individuals and corporations with offsetting their water footprints.   Their Water Restoration Certificate (WRC) program offers a chance for a corporation or individual to purchase a certificate offsetting 1000 gallons of fresh water use.

“WRCs are a voluntary, market-based program that provides economic incentives for water rights holders to leave water in critically dewatered ecosystems,” says the Bonneville Environmental Foundation.   The holders of water rights are paid to leave water in the ecosystem, rather than withdrawing the water unnecessarily and leaving a stream that cannot support its wildlife.

As described, these efforts are currently voluntary and are included in a corporation’s social or environmental responsibility.   The release of water footprint reports and the resulting focus on water stewardship, according to Ricardo Bayon, co-founder of Ecosystem Marketplace and now a partner at EKO Asset Management Partners, is a value in itself because it leads to an edge in the market for corporations like the Coca-Cola Company and Pepsi Co. by appealing to individuals who are conscious of products’ environmental impact.

Past experiences in water quality, carbon, and sulfur dioxide show that though voluntary schemes may deliver innovative solutions, large-scale environmental improvement only comes when a government imposes mandatory caps on usage or emissions.

Indeed, the Obama administration recently announced its intention to impose mandatory cap-and-trade on water pollutants across the entire Chesapeake Bay watershed after the ten states around the Bay failed to deliver results on their own.

Some conservationists, like Michael Van Patten, CEO of Mission Markets, think that these voluntary efforts could evolve into a regulatory water trading system.

“The fact that many companies will start measuring the water content of many of their products suggests that where there is transparency in this footprint, there must be action, and a water footprint credit could be one way to offset this impact,” he says.

In other words, companies could monitor their water usage and convert their reductions into a credit, forming the basis for a water reduction credit trading scheme.   If companies go beyond their allowed water use set by a governing body, they would have to offset it either by buying credits (generated from other companies reductions) or by investing in projects that will provide sustainable sources of fresh water.

“My opinion is that a tradable water footprint credit could be used to finance water projects in areas that have limited access to water,” says Van Patten.

The carbon market, however, enjoys an advantage over all other environmental markets currently in existence: namely, it’s easy to “commoditize”.

This is not the case with water, which only travels so far before it’s used.   For the Water Footprint Network, this means that fresh water use in one location cannot be mitigated by water restoration in a different location.   Most regulatory schemes currently in the works begin at the watershed level and build from there, says Bayon.     The growth of the market overall would then depend on the success of the watershed level market.

Measuring Impact in a Water Footprint

Coca-Cola and TNC take a different approach to the specific nature of water use and place importance on the impact of water use, rather than purely the volume of fresh water use—which is what a water footprint measures.

“When properly managed, even large volumes of water use can be sustainable in locations where the resource is sufficient to support the use and sustain ecological health,” says Brian Richter, Freshwater Program Co-Director of the Nature Conservancy in the press release.   “The number associated with a water footprint is not the end game but rather a starting point to addressing the sustainability of the water source.”

As Coca-Cola and TNC point out in their report, water usage must be examined in the context of its watershed source to understand if it will have an impact on local water resources.   From this understanding, the measurement of impact would have to be incorporated into a workable water footprint trade system.

Many who promote the use of water footprints to increase awareness of water use recognize the importance of including environmental impact in a report.   According to a recent Scientific American article, “Conservationists around the world are trying to figure out how to best include environmental impact in the footprints so they can be incorporated into food labels.”

In considering a water footprint credit system, Van Patten thinks that impact must be included.   However, he thinks it could be incorporated into the value of the credit rather than necessitating the restoration of water to a specific area.

“One way to do this is to create a trading ratio for a credit based upon the level of rainfall in a particular region,” says Van Patten.   “Similar to how currencies are given value, the ratio could change based on drought prediction or actual rainfall.”

For example, water credit in an area of drought would be multiplied by a specified ratio so that it would be more valuable than a credit earned in a rain-rich area, like the Northwestern United States.

“The value of water is easy to capture,” according to Bayon, because it is based on basic market forces, such as the demand for water.   In other words, if water use has a high impact in an area, it will be in higher demand and therefore confer more value.

Hannah Kett is an editorial assistant with Ecosystem Marketplace and a free-lance journalist focused on the non-profit sector.Ã‚Â  She can be reached at hkett@ecosystemmarketplace.com.
Please see our Reprint Guidelines for details on republishing our articles.