One year ago this month, the infamous Rim Fire started burning in northern California’s Sierra Nevada mountains. It raged for two full months and destroyed hundreds of homes and ecosystem services. Then something peculiar happened: the fire slowed when it hit the more naturally-managed Yosemite forest, offering one more key to help us manage our forests in a changing climate. 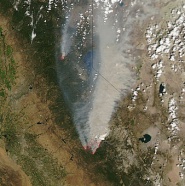 5 August 2014 | The Hetch Hetchy watershed is 160 miles from the San Francisco Bay area, but the people of the Bay rely on this granite-surrounded water supply as their drinking source.

Located in the Yosemite National Park, the Hetch Hetchy is situated along the Tuolumne River in California’s Sierra Nevada and acts as a reservoir collecting the mountain range’s melting snow. Its water travels to San Francisco through miles of pipelines and tunnels called the Hetch Hetchy Regional Water System, which supplies over 2 million people in four counties with water.

Last year, the now-infamous Rim Fire burned 250,000 acres of Sierra Nevada forestland from August 17, 2013 to October 24. But something stunning happened when it moved out of Stanislaus National Forest and into Yosemite: its intensity was immediately waned. That helped save the Hetch Hetchy and San Francisco’s water supply, but the fires still cost the San Francisco Public Utilities Commission (SFPUC) $55 million in infrastructure costs.

These damages and the fact that the fire came so close to threatening its water got the SFPUC thinking about natural losses. They wondered what the real costs of the fire were in terms of muddied water, lost pollination, dirty air, and a general loss of quality in the region and how high could those costs could go if the winds went against them.

The result is The Economic Impact of the Rim Fire 2013, which EE hammered out even as the fires still burned. By incorporating the loss of ecosystem services into the equation, it showed that damage from the Rim Fire itself had been dramatically undervalued from an initial infrastructure assessment of less than $50 million to anywhere from $100 million to $736 million once ecosystem services were factored in. Governor Jerry Brown used that assessment to qualify for federal disaster aid after the state was initially turned down by FEMA (Federal Emergency Management Agency), and it shined a light on the economic return that good forest management brings.

“We believe this to be the first time environmental values have been included in an application for a major disaster declaration,” says Rowan Schmidt, a project leader at EE and report author.

EE arrived at its figures in part using the Benefit Transfer Methodology, which uses local values and past valuation studies on similar or the same services, along with satellite data. The report estimated monetary values on 10 ecosystem services on eight different land types impacted by the fire. The services valued include air quality, carbon sequestration, pollination, water regulation and biodiversity.

Old Fire in a New Climate

Fires aren’t always bad. In fact, they’re an important component of forest ecology, EE’s report says, because they restore natural species and the ash nourishes new growth. But climatic changes that cause higher temperatures for longer coupled with an increase in human-caused fires means the wildfire season lasts longer and burns hotter than ever before.

On average, there are now seven times as many wildfires over 10,000 acres every year, according to the report.

There is another element practitioners in the field say heavily contributed to the Rim Fire’s intensity, and it’s one that EE’s report can now help correct. Pre-1970s, a no-burn policy in the Forest Service that suppressed all fires led to an increase in fuel loads (flammable material like underbrush). Forests became overgrown and dense, increasing their vulnerability to high intensity wildfires. And even though policy has been gradually changing since then, the buildup makes controlled burning and other techniques difficult to manage.

“When fires hit the landscape now, it does a lot of damage because it burns too hot,” Carr says.

What the West’s forests need, Carr says, are fuel thinning treatments that mechanically remove a forest’s fuel, but those cost money about $68 million in the nearby Mokelumne watershed, according to a cost-benefit analysis carried out there. That analysis, however, conservatively estimates the benefits generated from fuel treatment at $126 million.

Such treatment makes it safe to re-introduce fire that will burn at a lesser intensity. The less intense fires will continue to remove understory and increase its overall health.

“More fuel treatment is needed on a larger amount of acres,” says Carr.

“We can’t keep throwing money at suppression; we want to get to a point where we’re not just suppressing fires but proactively managing and restoring forest.

The fire burned below Hetch Hetchy so its water wasn’t under as much of a threat had the fire started closer to the reservoir. Also, there is less vegetation to burn around Hetch Hetchy compared to other areas. The huge granite structures surrounding the water acted as a buffer against the fire as well. However, both Carr and Manager of SFPUC’s Natural Resources and Land Management Division, Tim Ramirez, say the overall greater health of Yosemite’s forests contributed to the reduced damage reiterating Carr’s contention that good forest management pays off over the long run.

And that, say scientists from the non-profit organization, Point Blue Conservation Science, is why the Rim Fire ran out of steam upon moving out of Stanislaus and into Yosemite’s forests.

Water Comes from the Forests

As of right now, San Francisco’s water supply doesn’t need to be filtered. It’s treated but the high quality nature of the source allows exemption from the Environmental Protection Agency’s filter regulations.

But the huge threat of wildfires means this unique source of water-and others throughout the western US-are at risk. The Sierra Nevada Conservancy and other organizations are looking at potential investors in the needed fuel reduction treatments that will lower the risk of wildfire and initiate healthier forests.

One group of investors they’re targeting is water utilities. Raising peoples’ monthly utility bill by just a dollar or so, Carr says, could fund fuel treatments on a large scale.

As of right now, there isn’t any policy in development for this scenario to play out in the Sierra Nevada, but initiatives like it are happening elsewhere. In Arkansas, for instance, the utility that services Little Rock implemented a “Watershed Protection Fee,” which funds acquisition and conservation of land near Lake Maumelle-Little Rock’s drinking water source. It also funds environmental regulation and water quality monitoring activities.

Another example operating similarly is in North Carolina’s capital, Raleigh. A monthly watershed protection fee of about 45 cents is added on to ratepayer’s bills. The funds are used to purchase land near the water source and conserve it.

And there are many more cases. The Forest to Faucet Partnership between the utility, Denver Water, and the US Forest Service uses additional fees to practice forest treatment and watershed protection. It’s a well-known initiative that other municipalities are looking closely at. Wildfire risk was a prime reason Denver Water thought it smart to invest in a watershed protection project that enhances forest health.

And with the Rim Fire’s heavy economic and natural losses fresh in everyone’s mind and also the knowledge that the fire came within a hair of contaminating a huge water supply, the communities of San Francisco and perhaps all of California might look at programs such as Denver’s with a new-found interest.