Carbon investors over the past two years have assumed the agency leading the development of California’s cap-and-trade rules would recognize certain offsets generated under the state’s voluntary scheme once reductions become mandatory, and more than 200 projects have enrolled under those protocols.  Now, however, the state says it approved them in haste, and the status of all projects is up for review. 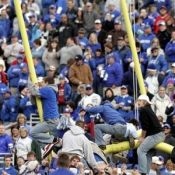 Carbon investors over the past two years have assumed the agency leading the development of California’s cap-and-trade rules would recognize certain offsets generated under the state’s voluntary scheme once reductions become mandatory, and more than 200 projects have enrolled under those protocols.   Now, however, the state says it approved them in haste, and the status of all projects is up for review.

3 March 2010 | Last week in Sacramento, California’s Air Resources Board (ARB) – the regulatory agency leading the formal development of the state’s cap-and-trade rules – took a major course-correction regarding its relationship to the voluntary offset standards it had previously been endorsing.   The decision (see “Read the Resolution”, right) stems from a dispute over the most recent forest offset protocol issued by the Climate Action Reserve (CAR), a state-created non-profit establishing voluntary offset rules for use around the country.

Simmering discontent erupted into a legal challenge to the ARB by the Center for Biological Diversity (CBD), an environmental non-profit, and culminated with the Board’s decision to recall its approval of all four voluntary offset standards that it had adopted dating back as early as October 2007.

Although CAR and ARB are independent organizations both in terms of oversight and operations, ARB’s sign-off would be required for any of CAR’s standards to be granted a compliance-grade seal of approval allowing use in California’s cap-and-trade program.   Even though ARB had not technically granted any official pre-compliance guarantee for CAR’s protocols through its earlier approvals, its earlier adoption of the protocols has contributed to a common misconception that CAR’s offset credits were already officially guaranteed a place in California’s future compliance scheme.

The CAR protocols remain in effect for voluntary projects, but their status under a compliance regime will remain undefined until all details of the regulatory regime are in place, probably in the fall, according to ARB spokesman Stanley Young.   Until then, they will be subjected to a series of public hearings and regulatory rulemaking procedures that could eventually earn these standards an official compliance-grade seal of approval from the ARB.

The Winding Road to Sacramento

Passed in 2006, California’s landmark cap-and-trade legislation, Assembly Bill 32 (AB 32), directs the ARB to “adopt methodologies for the quantification of voluntary greenhouse gas emissions reductions.”   At its October, 2007 meeting, ARB voted unanimously to adopt its first methodology, the forest carbon offset protocol that had recently been developed by the California Climate Action Registry (a subsidiary of CAR).

ARB staff believed that by adopting the new forestry protocol, they would not only endorse “a set of forest carbon accounting principles” for voluntary purposes, but also “signal the importance of voluntary reductions and provide some level of certainty for projects moving forward.”

Following on instructions from the ARB at the 2007 meeting to encourage broader participation from both industrial forest companies as well as public lands agencies, CAR released a revised forest project protocol after more than 18 months of deliberations of the multi-stakeholder Forest Protocol Working Group.

CAR’s final release of this forest protocol, now version 3.0, was followed shortly thereafter by another unanimous approval by the ARB in September 2009.   Even though the ARB resolutions adopting these protocols consistently reiterated such approval did not represent a regulatory or compliance-grade rulemaking, the Board’s mode of approving the protocols is what appears to have run into formidable opposition.

On November 9, 2009, CBD sent a formal letter to the ARB protesting changes made to the forest protocol between version 2.0 and version 3.0.

While claiming in press releases that ARB’s “illegal adoption” of the CAR forest protocol amounted to a “carbon credits for clearcuts forest policy,” CBD’s formal letter to the Board insisted that ARB had failed to follow the legal requirements of California’s Environmental Quality Act, particularly in failing to assess the environmental impacts of its decision to endorse the CAR forest protocol.

“The law calls for a very public environmental assessment process, but ARB failed to follow this procedure in the earlier phases,” says CBD attorney Kevin Bundy.   “We only challenged them on one of the four protocols – namely, the forestry protocol – and they then chose to withdraw all four protocols and begin again with a more public process.”

Although CBD participated in the 28-member Working Group that eventually produced the recent forest protocol, it remained dissatisfied with the direction the protocol was taking and articulated its grievances in comments submitted during a 2009 public commenting period.   Particularly concerned with changing language outlining the standard’s requirements for “natural forest management,” CBD asserted that “the definition of natural forest management has been broadened to the point of eliminating its value for ensuring the ecological value of forest projects.”

So sudden was the move to vote on this issue that Board member John Telles refused to approve the resolution for a simple reason.   “This is the first time I’ve seen this,” he protested.   “If there’s a resolution coming up, I would like some information about it before I vote on it.   I’m going to vote ‘no’ on this, just because I don’t even know what it’s about.”

Despite the policy reversal, ARB staff and Board members continued to voice support throughout the meeting for the protocols, CAR’s efforts in general, and for early voluntary actions to reduce emissions.   In a letter addressed to CAR President Gary Gero on February 12, ARB Executive Officer James Goldstene wrote to “assure [Gero] that we regard this as a procedural issue, part of the process of developing the requirements that will govern the use of offsets for compliance purposes under the cap and trade program.”

In testimony offered before the board at last week’s meeting, Gero replied “we fully support the ARB’s initiation of this process and very much look forward to working closely with you in that effort.”

CAR’s protocols will remain fully operational as voluntary offset standards during the new review process being launched by the ARB in April.   The review will include the environmental assessment in the form indicated by state law.

While offset credits from the CAR standard have fueled speculation on the voluntary market for “pre-compliance” offset credits, the ultimate value of CAR’s Certified Reduction Tonnes (CRTs) – or “carrots” as they are colloquially known – remains anything but certain.   CAR’s President continues to remain confident in the wake of this decision, however.

“We’ve designed the program to be a compliance-grade program,” says Gero.   “I think the market itself has become more sophisticated as to what is a high quality offset.   They’ve started to consolidate around those that present the least risk for potential use in a compliance market and that’s why you see people continuing to come to our program regardless of whether the federal legislation is slowing down or regardless of ARB action.”

For voluntary market participants, particularly those interested in pre-compliance credits, the proposed ARB evaluation of the 200+ projects already launched under CAR rules to see whether they could be given an early action stamp of approval will also surely be of interest.

Ultimately, ARB is back where it started, faced with the challenge of moving to reestablish certainty to support investment in and development of early action projects.   Unable to offer any guarantees that all 200+ projects will be certified as compliance-grade, or even that the protocols themselves will emerge through the review process without significant modifications required, the capacity of ARB to provide such certainty will surely be tested in the months to come.

David Diaz recently joined Ecosystem Marketplace as a Forest Carbon Associate.   He can be reached at ddiaz@ecosystemmarketplace.com.   Steve Zwick contributed reporting to this story.

What do you think?

Are you a project developer impacted by this decision, or do you have views as to how this decision impacts the environment at large? If so, post your comments below!