Between now and August, we’ll be examining the economic benefits of coral reefs and financing mechanisms designed to help preserve them. Here’s a look at the other side of that equation: what it costs to maintain them, and the challenge of meeting that cost through conventional means. 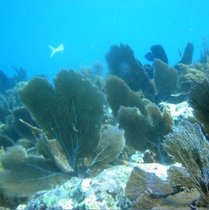 Between now and August, we’ll be examining the economic benefits of coral reefs and financing mechanisms designed to help preserve them. Here’s a look at the other side of that equation: what it costs to maintain them, and the challenge of meeting that cost through conventional means.

9 April 2014 | “The need was evident because I was diving all the time, going out to the same spots – and you get there, and the coral had died,” explains Ken Nedimyer, the former fisherman who initiated coral nursery-based restoration in the Florida Keys. Coral reefs, which provide habitat for over twenty-five percent of marine species, are dying worldwide, especially in tropical waters, from combined climate change, ocean acidification, overfishing, disease, and pollution stresses. In 2001, Nedimyer began to gather staghorn coral (Acropora cervicornis ) and elkhorn coral (Acropora palmater) from degraded reefs for his ad-hoc nursery in Tavernier Key. By 2003, his nursery coral looked strong, and Nedimyer began planting the coral within the nearby reef areas.

In 2004, Nedimyer began collaborating with the Florida Keys branch of The Nature Conservancy (TNC), and that same year, the Florida office of the Restoration Center of the National Oceanic and Atmospheric Administration (NOAA) offered Nedimyer and TNC their first joint grant, a $35,000 Community-based Restoration Grant for coral nursery and restoration work. “We were looking for grass roots groups that were really just trying to get started, get new ideas off the ground,” explains NOAA marine biologist Tom Moore, who runs the NOAA Restoration Center’s southeast Atlantic coral restoration work. “(T)hat is exactly what Ken was doing. They had an idea, it was a new idea, [and] it didn’t have a lot of big money behind it.”

In 2006, staghorn coral and elkhorn coral were listed as threatened species under the federal Endangered Species Act, and NOAA became even more interested in Nedimyer’s and TNC’s work, according to Moore. That year, the NOAA Restoration Center offered a $45,000 Community-based Habitat Restoration Grant to Nedimyer, TNC, and their new collaborators, the University of Miami, the Mote Marine Laboratory, and Nova Southeastern University. The total project costs for 2004 (which ran into 2005) and 2006 efforts were $88,000 and $105,000, respectively, according to Caitlin Lustic, TNC’s Coral Reef Restoration coordinator.

In 2007, Nedimyer reorganized his small, part-time group into the non-profit Coral Restoration Foundation (CRF). Because the grant money, the coral nursery, and the restoration effort were all relatively modest, Nedimyer continued working his fisherman day job.

This changed during the recession in 2009, when the American Recovery and Relief Act (ARRA), better known as “the stimulus,” funded NOAA’s Restoration Center with 168 million dollars for employment-generating restoration projects. Under the Stimulus, NOAA gave Nedimyer, TNC, and their partners a 3.3 million dollar grant to work on coral reef restoration for a three year period. With stimulus funding, Nedimyer dedicated himself full time to coral restoration. “It allowed us to really ramp up the program and take it to a whole new level,” says Nedimyer, whose own nurseries grew from approximately 5,000 to 30,000 coral during the three-year period.

Getting a NOAA stimulus grant was competitive and entailed a multi-level application review with separate panels of data and restoration policy experts. However, NOAA encouraged the TNC/CRF-led group , which now consisted of TNC, CRF, the University of Miami, Nova Southeastern University, Mote Marine Lab, and the Florida Fish and Wildlife Commission, all in Florida, to apply. (Penn State would also help out during the grant period providing genetic analysis of coral.) Creating jobs was key, says Moore, and he points out that “coral restoration was actually one of the most efficient ways to create jobs because we did not have lots of equipment expenditures… and it is relatively low tech. It is really people in the water doing work. And so that got a lot of traction.” Moore also credits the different coral restoration groups’ forging a strong partnership. “It allowed them to tell one cohesive story and ultimately get funded,” Moore says.

Once underway, the grant created thirty-five new jobs among the collaborating groups, with TNC coordinating the program, distributing NOAA-stimulus funds, and directly reporting to NOAA. The partners divided up the $3.3 million dollar grant, with TNC getting extra for administration, and Nedimyer getting the second largest portion of the grant. The partners focused on restoration in the Ft. Lauderdale, Miami, Upper, Middle and Lower Keys, and Dry Tortugas. Work in the United States Virgin Island St. Croix and St. Thomas parks were included as well.

The partners each set up a staghorn coral nursery and prioritized coral genetic diversity for hearty, disease resistant strains. Each group made plans to transplant approximately 1,200 coral during the last months of the grant period.

All participated in restoration. With CRF, for example, participants replanted sets of 400 coral at Conch Reef, Pickles Reef, Molasses Reef and Key Largo Dry Rocks, all in the Keys. The group produced new understandings of coral genetics with assessments published, and achieved high genetic diversity for staghorn coral. CRF now has over 100 genetic strains of staghorn at the CRF Tavernier nursery alone.

Lustic organized monthly meetings in which the different groups shared data and experiences. Nedimyer offered his own coral nursery experience, which proved critical. In 2010 a cold front swept through the Keys marine area, killing much coral placed at the bottom of the marine nurseries. Nedimyer’s innovations with coral trees and coral lines that were elevated above the marine bottom in CRF nurseries enabled his nurseries to avoid devastation, and he was able to resupply a few of the partners who lost hundreds of coral during the 2010 cold snap.

Lustic, Nedimyer, and Moore report solid success and coral nurseries still in place. Moore offers a big picture assessment where global stresses, such as climate change, need to be addressed. At the same time, Moore emphasizes the need for ongoing restoration today. Otherwise, he says, when and if those global challenges are addressed, there will be a “Panda bear” situation, “with coral reef in dire, dire straits.”

Moore adds that one major goal of the stimulus grant was to replant enough genetically diverse coral to have successful coral spawning events, which only happens once a year and which were desultory before the grant. He confirms that in 2013 a major spawning occurred in stimulus fund restored areas. “What we were trying to do with this project is to make sure that we outplant corals that are genetically diverse from one another and close enough to each other so that when they do have their one night of sexual reproduction that…those reefs that we have restored…will become seed grounds for other reefs in other areas,” explains Moore. “We set that up in a number of places.”

Lustic also points to scaled-up potential and demonstrable success as the stimulus grant’s legacy. But she is concerned that the partners, who remain a group and maintain nurseries, are underfunded. The group is currently receiving a modest $170,000 two-year NOAA grant divided six ways, which the partners match with their own raised funds and then TNC matches that amount, making it a 1-1-1 match. “We are only funding right now at a smaller level, and the partners are ready to be doing this at a bigger scale,” Lustic says. She also says that there is a possibility of receiving money under the Restore Act, the authority for collecting BP Oil Spill penalties. The funds are distributed to ecology-centered projects in the Gulf States. But that is very uncertain. Meanwhile, TNC does receive some alternative funding with the National Park Service supporting TNC’s Dry Tortugas program.

In a few places, advances continue. Nedimyer’s Coral Reef Foundation now has a $650,000 annual budget, with five full-time employees, and 40,000 coral in its nurseries. In addition to NOAA support, CRF receives significant private interest and support. Nedimyer and his team are also now providing guidance for Bonaire and Colombia on coral reef restoration and hold 15,000 coral in its Caribbean nurseries. Recently, his team formed another United States NGO just for international programs.

However, Nedimyer agrees with Lustic and Moore that the fall in funding makes it near impossible to bring south Atlantic and Caribbean coral reef restoration up to what it could be. “All of those nurseries are still running. All of them have plans to do more…Now NOAA is convinced this can be done on a big scale and that we have worked out all the bumps,” Nedimyer says. “The [grant’s] legacy is ‘look at all we can do now. We have all the tools in place, we have the corals in place, and we have people trained how to do it…’ So we say, ‘look, let’s keep doing this.’ ”

Richard Blaustein is a freelance environmental journalist based in Washington D.C. He can be reached at [email protected]