Smoke-induced illnesses caused by the use of traditional cookstoves kill more than 7,500 Nepalese women and children die every year a tragic fact the Nepalese government is trying to address by pursuing a goal of clean cooking for all by 2017. Here’s how a clean cookstoves program created by Dutch development organization SNV is contributing to that goal. 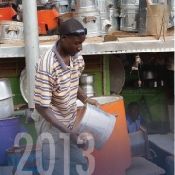 12 January 2015 | There are plenty of reasons for not pursuing a clean cookstoves program in Nepal: political uncertainty, lengthy timeframes, and the inaccessibility of remote villages in the far western part of the country. But with smoke-induced illnesses killing thousands of people annually as of early 2013, then-Prime Minister Baburam Bhattarai announced a goal of clean cooking for all by 2017. The government’s renewable energy body, the Alternative Energy Promotion Center (AEPC), had already disseminated 650,000 improved cookstoves, but it lacked the resources both financial and institutional to scale up and reach out to the far reaches of the country.

With the help of the Nepal branch of Dutch development organization SNV,Nepal has since distributed 34,000 stoves in the past two years more than the total marketed in the 12 years preceding its intervention and they did so by helping AEPC to build a market rather than just subsidize distribution.

SNV hasn’t been in the cookstoves space for long. The Dutch agency has worked in Nepal for the past 20 years on biogas installations, but only started including cookstoves four years ago, when the organization underwent an internal restructure of key program activities. While AEPC brought technical expertise to the cookstoves sector, Dekelver says SNV had come to understand the market side through its biogas programs, which globally include a “multi-stakeholder sector development approach.In other words, the SNV biogas program tries to encourage and strengthen a commercially-viable biogas sector.

In theory, such a program would end up making SNV’s role obsolete, so that the development agency can then cede its role to local participants. In the early going, however, SNV plays an active role in building up the market. Dekelver, for example, describes how SNV stepped in to perform some of the supply chain functions at the start of the Nepali intervention functions it will eventually leg out of in the hope that the private sector can pick up the slack.

“The quantities and the impact [of the stoves] is important, but we go beyond just the numbers, he says. “At the heart of those functions is the local private sector whom we think basically should take up cookstoves as part of their business or as their key business for some of them.

SNV volunteered when AEPC asked for partners to oversee regional distribution activities, and chose to work in seven districts in west Nepal. These districts represent some of the country’s most remote principalities.

“When we started and said we were going to that area, people were asking, ‘Why go there?’ he says. “We saw it one as a challenge but also as an advantage that the playing field was relatively fresh: not many actors were involved. We thought we would more or less have a clean slate to allow a new type of approach.”

The stove of choice, a rocket stove, uses a metallic combustion chamber that increases airflow and increases internal combustion. It’s so named for the resulting roar of intense heat. Different models are used throughout Nepal, with the hilly and mountainous regions of the west requiring stoves to also function as space heaters to deal with the colder climate.

SNV works with five pre-qualified metalwork shops within the area to secure the metal core necessary to create such a stove. The benefits are two-fold: this helps the shops diversify their business, while also cutting down on transportation costs. Now, two of those shops have invested in machines and metal presses to produce the stoves in a shorter timeframe the first sign of private sector investment.

“It is their money, Dekelver says. “They are not getting any aid money for that. They just see the business and go for it. Ideally, that model would also be spread out across the country.”

The manufacturers will also help with another private initiative: carbon finance. Each manufacturer engraves the top of a stove plate with a number that links the stove from workshop to end user. That will make it easier for SNV to monitor the stoves and check the quality during verification of their project’s offsets.

SNV couldn’t start selling the stoves at full price and expect success because locals expected heavy subsidies or entirely free products. Instead, the organization will use carbon offsets to introduce more modest subsidies. Similar to Proyecto Mirador’s model, the organization received outside funding from the Dutch energy company Eneco to develop a Program of Activities (POA) through the United Nations Clean Development Mechanism.

While impressed with the involvement of local manufacturers, Eneco’s Mark Meyrick, head of Eneco’s Carbon Desk, was initially skeptical of working on a cookstoves PoA. The organization had previously experienced trouble with the monitoring, reporting and verification element of its first PoA a light bulbs exchange project that seemed much more straightforward in comparison.

Based in the Netherlands, Eneco has already met their compliance commitments under the European Union’s Emissions Trading Scheme (EU-ETS). However, the company’s energy trade department also advises and sells offsets to other companies wishing to fulfill compliance or voluntary emissions reductions. The department was attracted to the Nepal project because it meets a geographical requirement for its European compliance buyers.

In 2013, the EU-ETS required that all new offsets come from a “Least Developed Country (LDC) which Nepal qualifies as. Many early carbon projects didn’t invest in these countries instead preferring developing projects in emerging economies such as India and China. This makes LDC offsets something of a hot commodity.

Cookstoves only sweetened the deal. The projects are known for their many “co-benefits or focus on sustainable development criteria beside emissions reductions.

“It ticked a lot of boxes, summed Meyrick.

Of course, the project has not been without mishaps. “The problem with PoAs is that there’s a lot of moving parts, he said. Some assumptions made early need to be revised as updated information comes in.

One such assumption regards the rate of use for the new stoves. A common problem called “stacking occurs with stoves, which happens when recipients use both stoves instead of switching to the cleaner one exclusively. SNV had assumed about 10% of users would stack stoves. New research revealed that figure was higher, meaning that the stoves won’t reduce as many emissions as previously estimated.

Even with these setbacks, however, the project expects verification and issuance sometime in 2015. Eneco will then buy the offsets and resell them to interested clients.

Minor problems with a PoA are expected. What couldn’t be predicted is the state of the carbon market. When SNV and Eneco first agreed on a contract back in 2012, the average price for CDM offsets had declined but not as much as it has today.

Then, Eneco agreed to provide above-average market prices. Now, Meyrick thinks that they need to commit to even higher amounts. He has taken a step further and gone back to SNV about restructuring the contract.

“It was struck in another time and another place, in another market,” he says. “Essentially, we’re going to have to show them a better deal to make it equitable.”

Regardless of the final agreed-on price, SNV already prepared for a slump.

“We didn’t build our entire project on the carbon credits, which would be – given the current market rates – a killer to the project, Dekelver explained. “But we do see it as an add-on. As things are now we should still be able to cover the subsidy bit”.

Currently, SNV’s goal is to distribute 150,000 stoves in the region by mid-2017, which Dekelver describes as more or less on target.

But even reaching this target won’t mean universal clean cookstoves for the region. Clean cooking for all, in each of the seven regions, would require an estimated additional 100,000 stoves. “We can definitely make a big step in that direction¦ [But] even the 150,000 will be a tough cookie.

More feasible is a 2020 deadline, something potential donors are considering in talks about scaling up the project. In the meantime, Dekelver hopes that SNV’s early success will let the organization share and practice its model elsewhere in Nepal, with other organizations such as the World Wide Fund for Nature, Practical Action or Winrock International stepping into to manage their own clusters of cookstove markets.

“I’m not saying we are claiming that we want to do this in the whole of Nepal, he says. “That would be impossible. That’s not our intention. I think an ideal setup would be where there would be a fund manager where we could play a coordination role or take up an additional cluster to the one that we have now.”

Everyone uses stoves to cook food, but not everyone risks respiratory illness or even death by using them. For almost three billion people in the world, open fires and rudimentary stoves are the norm. There is a growing solution, championed by development agencies, entrepreneurs and private companies: “improved cookstoves and fuels.

Part Four: Building Carbon Markets from Soot We examine the Nepalese government’s initiative to ensure clean cooking for all by 2017 through the lens of a Dutch partner non-profit SNV. The organization is trying to build up a private market for stoves, but first uses carbon finance to lower costs for people used to receiving stoves for free.