Weather-related disasters cost us more than $380 billion in 2011, and climate-change is expected to double that every 12 years, according to the Climate and Development Knowledge Network.  The group recently took a look at how such projections can be worked into fiscal and economic policy planning. 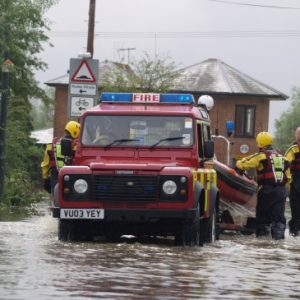 Weather-related disasters cost us more than $380 billion in 2011, and climate-change is expected to double that every 12 years, according to the Climate and Development Knowledge Network.   The group recently took a look at how such projections can be worked into fiscal and economic policy planning.

This article originally appeared on the Climate and Development Knowledge Network. Click here to view the original.


22 May 2012 | Government and business must put weather-related disaster risk management at the heart of economic and fiscal planning.

That is the message from a new Climate and Development Knowledge Network (CDKN) report ‘Tackling Exposure; Placing Disaster Risk Management at the Heart of National Economic and Fiscal Policy’   launched May 9 at the African leg of the World Economic Forum (WEF).

The report carries the clearest messages yet that government and business leaders must respond swiftly and decisively to the latest climate change science, and anticipate extreme weather-related disasters as they undertake strategic policy and business planning.

2011 was the costliest year on record for disasters, with estimated global losses of £234billion (US$380 billion), it states. Losses from extreme weather-related disasters are doubling every 12 years as more people and assets are in harm’s way and the effects of climate change bite.

Perhaps most alarmingly for the global business and finance communities, climate-related disaster losses – in economic terms – are growing faster than increases in per capita Gross Domestic Product (GDP) in many regions.

CDKN’s report on ‘Tackling Exposure’ comes hard on the heels of the Inter-governmental Panel on Climate Change (IPCC) report on ‘Managing the Risks of Extreme Events and Disasters to Advance Climate Change Adaptation’ (known as ‘SREX’, March 2012) which issued a stark message to policy-makers on the increasing frequency of climate   extremes expected as the century unfolds.

“The number of climate-related disasters is growing and it’s clear that paying for disaster relief and recovery on such large scales is unsustainable in both human and financial terms”, says ‘Tackling Exposure’ co-author Dr Tom Mitchell, Head of Climate Change, Environment and Forests at the Overseas Development Institute and SREX coordinating lead author.

“It is no longer acceptable to wait until something happens.   A lot of work has been done on planning for disaster mitigation around the world, but rarely pro-actively by business.   And while some of the more graphic examples in our report are in developing countries, the messages are equally relevant in the UK.”

“Our dramatic and damaging drought with floods scenario, with hose pipe bans in flooded areas of UK ,   is a serious taster of the pattern predicted by the IPCC  and we need to genuinely think how best to protect industry and this country’s resources.

The IPCC found that extreme events such as record hot days – previously expected once in 20 years – will become an annual occurrence in most world regions if we do not drastically cut carbon emissions. The length, frequency, and intensity of heat waves will increase over most areas too, while rain, when it comes, will be heavier.

Dr Mitchell continued: “While support for effective disaster relief and recovery must remain, there should be greater emphasis on proactive efforts to reduce risk through comprehensive risk assessments and risk reduction measures integrated in UK national economic and development policy.

“Nor does it have to be a disaster in our own backyard to affect us, as we found when the Japanese earthquake hit manufacturing here in the UK.   We have to think globally and I really hope that our report provides an impetus to act.”

A number of far-sighted countries are already integrating disaster risk management into economic and fiscal planning, says the CDKN report, but the majority have yet to act.

Disaster risk assessments must be factored into national and provincial budgets, land-use plans, infrastructure investments, with legislation and enforcement that limits the exposure of people, critical infrastructure and other assets.

The report contains practical examples from which others can learn, including cases from Central America, Central Asia, Mexico, Nepal and the Caribbean, involving tools and methods related to risk assessment, risk financing options, sector-level mainstreaming and legislation.