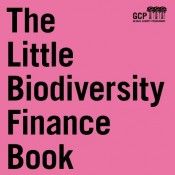 5 June 2012 | Finance for biodiversity could be scaled up from around USD 52 billion in 2010 to as high as USD 160 billion by 2020, if the public and private sectors work together to implement a range of financing approaches, according to the new Little Biodiversity Finance Book, published today by the Global Canopy Programme (GCP).

This third edition of the book explores the mechanisms for scaling up biodiversity finance, how delivery could be improved, and how institutions could support the increase in scale – key questions ahead of this month’s United Nations Conference on Sustainable Development (“Rio+20”) and the 11th Conference of the Parties to the Convention on Biological Diversity (CBD) in October.

Using the latest available information, the authors show that finance for biodiversity totaled USD 51.8 billion in 2010 – the year in which the world failed to achieve the global biodiversity target to “achieve a significant reduction of the current rate of biodiversity loss” set by the CBD.

To reach the new, more ambitious targets set for 2020 – known as the Aichi Targets – more finance must be generated, but the proportions allocated to different parts of the world must also change.

Nick Oakes, Environmental Economist at GCP and one of the authors, said: “The world failed to meet the 2010 target to reduce biodiversity loss because of a lack of finance, but also because the available finance was being spent in the wrong places.

Oakes added, “However, finance still needs to increase across the board, because even developed countries with their higher levels of funding failed to meet the target in 2010.”

The authors explore 17 mechanisms for generating finance, from official development assistance and reform of agricultural and fossil fuel subsidies, to greening commodities and cap-and-trade markets.

They argue that all 17 mechanisms must be harnessed and scaled up in order to achieve the Aichi Targets. In combination, the mechanisms could raise up to USD 159 billion annually by 2020 – more than three times what was spent in 2010.

The book also reveals that current biodiversity finance is overwhelmingly paid for by the beneficiaries of ecosystem services, who generated 93% of finance in 2010, while the “polluters” (those who directly reduce the provision of biodiversity and ecosystem services) only paid 7%. The authors say that by scaling up finance across all mechanisms to their full potential, more of the cost could be shifted to the polluters. This is because as finance is scaled up, proportionally more finance is generated from market-based mechanisms, which tend to favour the polluter paying.

Currently only 20% of biodiversity finance is generated from market-based mechanisms, such as greening commodities and biodiversity fees, with the remaining 80% generated from non-market based approaches, such as official development assistance and domestic budget allocation. Whilst the authors do not favour one approach over another, they say that if the USD 159 billion figure is to be reached, a greater balance will be needed between market and non-market based financing mechanisms.

Braulio Ferreira de Souza Dias, Executive Secretary, Convention on Biological Diversity, said: “Investment in biological diversity undoubtedly provides economic benefits as the study by TEEB detailed. We therefore have to consider all suitable options to leverage resources from existing sources for achieving the 2020 Aichi biodiversity targets. This needs to be done simultaneously through mainstreaming, incorporating sustainability criteria in government procurement, reviewing subsidies and other economic instruments and further engaging the business sector, among others while respecting the rights of indigenous and local communities in relation to access to biological resources. This new edition of the Little Biodiversity Finance Book provides useful data on current expenditures and ideas for mobilizing additional resources, providing a valuable contribution for the discussion at COP 11 on resource mobilization.”

The third edition of the Little Biodiversity Finance Book becomes available online today (5 June), and hard copies will be available at the 11th COP of the CBD in Hyderbad, India, in October.