Brazil has slashed deforestation in the past decade, in part by enforcing its decades-old Forest Code.  But that enforcement, and the spirit of the code itself, may soon be a thing of the past.  The Environmental Defense Fund’s Steve Schwartzman says it doesn’t have to be that way. 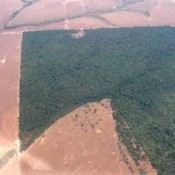 The following article is reproduced with permission from the blog EDF Talks Global Climate.   View the original here.

10 February 2012 | Brazil has made great strides in reducing Amazon deforestation, bringing rates down about 80% over the last six years. But President Dilma Rousseff is already showing signs of backsliding on her environmental commitments in just her first year in office.   It’s a development environmental groups noticed within weeks of her taking office last January.

With global emissions from deforestation contributing about 15% of greenhouse gas emissions – as much as all the world’s cars, trucks, ships and airplanes combined – a lot is at stake in next month’s vote on the country’s landmark Cí³digo Florestal – its environmentally-progressive Forest Code.

The Forest Code has existed for decades, but was rarely enforced or obeyed until a decade ago.   That’s when then-Environment Minister Silva launched a national Plan for the Prevention and Control of Amazon Deforestation that ramped up law enforcement and established 600,000 square kilometers – an area the size of France – as new protected areas. These indigenous lands, parks, and forest-land reserves were located in the areas most affected by the expansion of agriculture.

Coupled with a temporary decline in agriculture commodity prices, the Plan brought deforestation way down, and persuaded policy makers that Brazil could commit not only to a national deforestation target, but to an overall national emissions reduction target as well.

Brazil made just such a commitment at the 2009 Copenhagen climate conference, pledging to reduce its emissions 36–39% below business-as-usual emissions by 2020 — the first emissions reductions target taken by any major developing country.   And Brazil is ahead of schedule to meet this 2020 target, having already reduced about 1 billion tons of carbon dioxide below its 1996–2005 baseline – on the order of what the EU has pledged to do by 2020.

However, while the deforestation plan was supposed to have a carrot (positive incentives for conservation) in addition to the stick (cracking down on illegal deforestation), so far it’s pretty much been all stick and no carrot: lots of law enforcement, but no incentives to keep the forests standing.

Many large-scale farmers in Brazil historically had railed against the Forest Code as being too restrictive, but were too busy cutting down trees to plant cattle pasture and soybeans to do much about it. Since the Code was rarely enforced, they didn’t much care.

But they started to take notice when government, under Minister Marina Silva, began enforcing the Code and fining them for violations.

They also noticed when the environmental group Greenpeace mobilized big European soy importers to declare a moratorium on soy imports from land deforested after 2006, and when national supermarket chains, prodded by Brazil’s Attorney General, called for deforestation-free beef in 2009. Most people in urban Brazil agree that Amazon deforestation should stop, and support such measures.

For many of the large-scale farmers in Brazil and their powerful block of congressional representatives – the “ruralistas” – the solution to their not being in compliance with the law when government started enforcing it was to weaken the law.

So for the past two years, the ruralistas have been making a concerted push to radically weaken the Forest Code.

Last June, the ruralistas pushed a revised Forest Code through the lower house of Congress that amounted to a license to deforest. The bill, sponsored by a ruralista-friendly member of the Communist party, would fix the ruralistas’ problem by giving an amnesty for past illegal deforestation, and could open up new land for clearance.

Environmentalists and the Brazilian scientific community strongly contested the House bill. President Rousseff had promised during the presidential campaign to veto a new Forest Code that would increase deforestation or amnesty past illegal deforestation, but her administration was a belated and ineffective participant in the House debate.

In December, the Senate passed somewhat improved amendments to the Code, which, however, still includes an amnesty for some past illegal deforestation.

This bill now returns to the House for a final vote in March.

The amnesty for deforestation that has plagued these bills is unfair to the few farmers who made the effort to comply with the law, and could give all farmers the bad idea that if one new law granting amnesty for illegal deforestation is good, two – or more – are better. If farmers think that an amnesty now means that future illegal deforestation will eventually be amnestied too, they will take the new Code as a license to deforest. Penalties for scofflaws, and a clear pathway to legality with positive incentives, especially for small famers, would be much better.

Environmentalists are calling on Dilma to keep her campaign promise and veto the amnesty.

Deforestation: The Price of Progress? Not Really.

For years, the ruralistas have insisted with increasing vehemence that the current Forest Code is an enormous, unfair obstacle to the growth of Brazilian agriculture. (They also often claim that environmentalists who support the Forest Code are no more than a front for foreign agriculture interests trying to protect themselves against Brazilian competition).

But there is solid evidence that while deforestation rates were falling to the lowest levels on record, Brazil and Amazon states were getting richer and agriculture production was growing to record levels.

The state had the highest deforestation rate in the Amazon from 2000–2005, but over the next five years (2006-2010) saw deforestation fall more than 70% below historic levels. At the same time, agriculture production reached an all-time high, according to a recent article in the leading scientific journal Proceedings of the National Academy of Sciences. In “Decoupling of deforestation and soy production in the southern Amazon during the late 2000s,” Marcia Macedo, Ruth DeFries and others also show in great detail that in recent years, while soy prices and production picked up substantially, deforestation kept going down.

Ruralista rhetoric to the contrary, Brazil and Amazon states have shown decisively that, so far, they have the wherewithal to reduce deforestation substantially while they grow their economies and their agriculture sectors.

Forest Code amendments threaten to usher in open season on forests. The government has watered down environmental licensing for big infrastructure projects like dams and roads and has rolled back protected areas in the Amazon by a form of executive fiat. Brazil’s Congress is also considering a bill that would give it a veto over recognizing new indigenous lands.

Perhaps most critically, there has been little progress on providing the carrot – positive economic incentives to keep deforestation going down and to restore degraded forests – that Brazil needs in order to sustain the progress it made during the last decade into the future.

One candidate for the carrot is Reducing Emissions from Deforestation and Forest Degradation (REDD)   – the concept that reducing deforestation is good for the atmosphere and needs international compensation. Brazil was one of the pioneers of this idea in the international climate talks, and consequently created the Amazon Fund, to which Norway has committed $1 billion if the country continues to meet its 2020 target.

Brazil’s National Climate Change Policy also calls for the creation of a Brazilian emissions reductions market. But the federal government has made little headway on creating its own carbon market and has been reluctant to look at linking up with international carbon markets to pay for reducing deforestation. Both could go a long way to creating the incentives needed to grow the economy and sustainably expand agriculture and forestry, while stopping deforestation and restoring degraded forests.

What all of this means is that Brazil still leads the world in reducing carbon emissions because of its success in reducing Amazon deforestation – but risks reversing the trend if it approves a general amnesty for illegal deforestation. President Rousseff should listen carefully to Brazil’s world-class scientific community on how to balance environmental protection and development priorities, in the Forest Code and more broadly.

As Brazil prepares to host the Rio+20 Conference on Sustainable Development, it will find no lack of major developed countries to criticize for foot-dragging, omission, or outright obstruction on global environmental issues.   Ambitious new commitments on environment and development are unlikely under the specter of economic crisis in the EU and anemic growth in the U.S. Blaming richer countries for tepid results is one possible outcome.

But if President Rousseff   musters the political will to kill the deforestation amnesty and save the Forest Code, Brazil could do much better in Rio+ 20. It might find ways to use its world-leading achievement in reducing emissions from deforestation to chart the way to both more ambitious commitments and effective actions from other major economies going forward, and for funding for a sustainable low-carbon development strategy.

Will Brazil Change its Forest Code – and Kill the Amazon?