Deforestation in Brazil has slowed to its slowest rate since measurements began, according to the Brazilian delegation to the UN’s 18th Climate Change Conference in Doha. The discussion focused on Brazil’s long-term plans to maintain these low deforestation rates as well as how this accomplishment will impact climate negotiations at the conference. 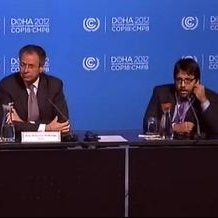 29 November 2012 | Doha | Qatar | Last year’s deforestation rate in the Amazon was the lowest on record since measurements began in 1988, and the record was broken again this year as deforestation was cut by 27%, the Brazilian delegation to the 18th Conference of the Parties (COP 18) to the United Nations Framework Convention on Climate Change (UNFCCC) says, marking a significant achievement for rainforest preservation.

As of right now, Brazil is well on its way toward meeting its 80% reduction of deforestation target by 2020, although the delegation reminded listeners of the long-term difficulties in maintaining low deforestation rates.

“We have to be sure of sustainable development that takes into consideration the environment and economic and social dimensions,” says Andre Correa do Lago, Brazil’s chief negotiator at the COP.

Despite the downward trend, the country’s recently weakened Forest Code adds a new risk to rainforest preservation. In the past two months, deforestation rates in the Amazon rainforest have increased.

But Brazil also has seen advancements in deforestation monitoring technology as well as proper regulation of existing environmental laws that have helped lead to the deforestation reductions. Mato Grosso, the Brazilian state that was the site of 40% of the nation’s overall deforestation, saw a major decrease beginning in 2005. This was in part because of forest protection laws as well as land management changes, according to “Overview of Subnational Programs to Reduce Emissions from Deforestation and Forest Degradation (REDD) as Part of the Governors’ Climate and Forests Task Force ”, published by the Electric Power Research Institute (EPRI).

REDD (reducing emissions from deforestation and degradation) is another option Brazil has in helping to keep deforestation rates low. The Brazilian state of Acre, for example, signed a memorandum of understanding to link their REDD+ programs with California’s new cap-and-trade program in as early as 2015. California’s program is still discussing if they will accept international REDD credits.

At this point, Brazil’s success at cutting deforestation is a clear indication that developing countries are following through with their part of the international community’s agreement to curb climate change, says Correa do Lago. He believes this information will have an impact on negotiations in Doha in terms of pushing developed countries to act.

Mariana Pavan, Public Policy Coordinator at Idesam, (The Institute for Conservation and Sustainable Development of the Amazonas) agrees. “Brazil is a very good example of developing countries ‘doing their homework’,” she says. “Hopefully this will move developed countries to commit to higher goals.”

To combat climate change, the international community agreed to provide developing nations with the technological and financial resources necessary so these countries could mitigate and adapt to climate change. The developed world has the financial and social stability, technology and capacity to take the lead on fighting climate change but hasn’t, the Brazilian delegation says.

“If these societies cannot reduce emissions in key areas” says Correa do Lago, “then we believe it will be very difficult to ask developing countries to do more.”

Brazil’s goals at COP 18 in Doha this year include closing negotiations on the structure of implementing UNFCCC’s climate policies for the next 10 years as well as laying groundwork for next year’s conference that will discuss post-2020 plans more in-depth.