The 100,000 or so people who live in Boulder, Colorado have always been a green bunch, and it’s no surprise they believe we should dig into our own pockets to fight climate change. This week, they once again put their money where their mouths are, when 82% of those participating in a referendum decided to keep the city&rsquo;s landmark carbon tax for another five years. 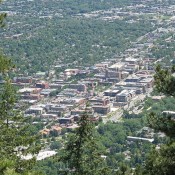 The 100,000 or so people who live in Boulder, Colorado have always been a green bunch, and it’s no surprise they believe we should dig into our own pockets to fight climate change. This week, they once again put their money where their mouths are, when 82% of those participating in a referendum decided to keep the city’s landmark carbon tax for another five years.

20 November 2012 | Residents of Boulder, Colorado have been known to describe the town as “nestled between the mountains and reality”. Indeed, on November 6th, “The People’s Republic” became a type of dreamscape for climate advocates. For the second time, voters approved a carbon tax. Yep, 82% of voters checked the yes box on the proposed issue with “carbon” and “tax” in the title.

Proposed in 2006, the Climate Action Plan became the nation’s first municipality-level carbon tax. The CAP allows the Boulder government to tax electricity consumption, and use those proceeds to offset carbon emissions through the use of energy efficiency and renewable energy programs. So far, the city has received between $600,000 and $1.8 million a year from the tax. Most of this money comes from industrial customers, who pay approximately $9600 a year; businesses and individual households pay only around $94 and $21 respectively. The overall goal of the CAP is to achieve emissions reductions targets in line with the internationally approved Kyoto Protocol. Boulder’s Climate Action Plan was one small city’s attempt to include meet these international standards.

The CAP has only succeeded in reducing 42.6% of planned emissions reductions for 2012. However, city officials are learning with the growth of this program. The CAP was assessed and updated in 2009 and 2011, resulting in the discontinuation and creation of some programs, and a streamlined process for easier access to existing programs. An evaluation report by the Rocky Mountain Institute in 2012 concluded, that “while the city will not reach its Kyoto Protocol carbon emissions reduction goal this year, …Boulder has generated significant carbon savings at a reasonable cost.” The report highlighted the current cost-effectiveness of key programs, including the lighting replacement programs and Solar Grant Program. However, it also acknowledged that pricier programs like EnergySmart program, which provides a comprehensive assessment, recommendations, and loans for improving energy efficiency throughout a home or business, will become more effective over time as the high start up costs result in a longer-term payoff.

“Our community has made tremendous progress over the past five years, and we are poised to make even more significant progress in the next five” states Executive Director of Community Planning and Sustainability David Driskell. Efforts to expand and improve the program will be based on the advice of an external consulting group, the Brendle Group. Completed this June, the consultant’s report highlighted several key areas of improvement and its proposals include: reserving some funds for open-request, new energy saving programs, consolidating existing commercial programs, and creating a tracking system to monitor a project’s success.

City officials have also stated that they will focus much more on the commercial sector, where the majority of emissions originate. They add that benchmarking and reporting of energy use may become mandatory for businesses this upcoming year; and they may mandate that businesses achieve specific energy targets.

With so much planned, cities around the United States will certainly be keeping an eye on Boulder over the next five years. As mentioned in the Denver Post, Boulder Mayor Matt Appelbaum hopes that this will encourage other cities, by proving that “it allows us to continue as a model for other communities in terms of progress that are cost-effective and reduce greenhouse gas emissions and are just a good return on investment.”