Never before have we known as much about the synergies between forest carbon and biodiversity as we do now, but that knowledge has been hidden beneath layers of impenetrable gobbledygook. A new sourcebook aims to fix that by scraping away the jargon and connecting dots previously visible only to experts. More importantly, it succeeds. 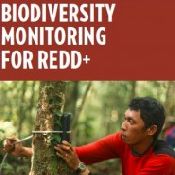 22 October 2014 | Over half the world’s known species are found only in tropical forests, and companies that invest in forest carbon projects often do so as much to conserve endangered habitat as to sequester carbon. Indeed, most privately-funded forest-carbon projects explicitly identify and tout their biodiversity impacts to attract top dollar, which is why voluntary carbon markets have succeeded in using carbon finance to both reduce greenhouse gas emissions from deforestation and forest degradation (REDD) and to conserve biodiversity.

But can governments replicate that success at a national or at least state-wide level?

That question was central to last week’s 12th Conference of the Parties (COP 12) to the Convention of Biological Diversity (CBD) in Pyeongchang, South Korea, where delegates explored the synergies between sustainable forestry and biodiversity conservation.

Such exploration is critical, but it’s often accompanied by apprehension and with good reason: biodiversity is complex by nature, and REDD is already complex by design. Well-intended efforts to create comprehensive global agreements often yield theoretical frameworks that solve the world’s problems on paper but prove impossible to implement on the ground as anyone who’s followed the CBD and the United Nations Framework Convention on Climate Change (UNFCCC) can attest.

Or, as the authors of “A Sourcebook: Biodiversity Monitoring for REDD+ put it: “A key challenge [to monitoring biodiversity for REDD] is to avoid creating monitoring and reporting systems that will be too difficult and expensive for countries to implement.

Published jointly by the Zoological Society of London (ZSL) and the Deutsche Gesellschaft fí¼r Internationale Zusammenarbeit (GIZ), the sourcebook scoops together research and analysis from scores of sources and then scrapes away the jargon to provide as clear and concise a summary of the current policies and programs as you’ll find anywhere.

The book offers a four-stage framework that begins by explaining the objectives of monitoring biodiversity for REDD+, then identifies specific indicators that can be used and progresses into implementation and communication to relevant audiences.

This sequence provides an incredibly accessible explainer that will help anyone who knows the basics of REDD understand the complex array of efforts underway on the biodiversity front both in policy and in practice.

In the early chapters, the sourcebook clearly shows how the UNFCCC’s Cancíºn Safeguards for REDD deliver biodiversity benefits and how the CBD’s Aichi Targets support healthy forests. It also provides side-by-side comparisons of the four biodiversity safeguard initiatives already in place for REDD two emerging under the UN and World Bank, one created by two NGOs but for government programs, and one program that serves the voluntary sector.

By the time you’re finished, you’ll know how animals are trapped and monitored, which organizations offer what support, and how all of these monitoring efforts dovetail with monitoring efforts that will already be undertaken to account for carbon under REDD, as well as what additional costs to expect in terms of human, technical, and financial resources.

Throughout the book, the authors revisit the Emalu REDD+ pilot project in Fiji to provide concrete illustrations of the concepts they’re exploring, and in the final chapter they examine five monitoring initiatives to illustrate how the four-step process influenced their design. Each of the five is presented in three ways: a fact sheet introduces the project, a summary page examines how each project incorporates the four steps, and a report card then grades each step based on how purposeful, effective or realistic it was three criteria that were laid out at the beginning of the book.

The narratives in this closing chapter are, unfortunately, a bit of a disappointment especially given the clarity and depth that the rest of the book offers. It’s hard to tell whether the authors were simply trying too hard to be succinct (a welcome aspiration in a sector that’s often drowning in words) or whether they ran out of time before they could conduct the kind country-specific interviews that would have fleshed out the narratives (a challenge we can all relate to). Whatever the reason, they clearly leave a lot of meat on those five bones meat that they exquisitely prepared over 70 carefully-crafted pages, and which they should have given us a chance to enjoy before clearing the table.

But even that sense of disappoint speaks more to the quality of the pages that came before it than to the brevity of that last chapter. This is, after all, a sourcebook and not a comprehensive compendium of biodiversity finance, and the authors do provide plenty of links to the projects they’re summarizing.

With the landscapes approach to REDD gaining prominence in the lead-up to year-end climate talks in Peru, we need more efforts to bring these complex issues out of the wonky world of the experts and into the simple world that most of us inhabit. This sourcebook succeeds in doing just that, and it should be at the top of any REDD specialist’s reading list.