The global market for biodiversity offsets topped $3 billion in 2010.  That’s roughly seven times the size of the voluntary carbon market and a clear indication of the need for efficient and sustainable habitat restoration, according to a new report from Ecosystem Marketplace. 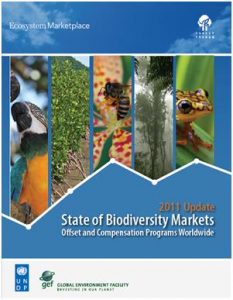 The global market for biodiversity offsets topped $3 billion in 2010. That’s roughly seven times the size of the voluntary carbon market and a clear indication of the need for efficient and sustainable habitat restoration, according to a new report from Ecosystem Marketplace.


27 June 2011 |  Despite – or, perhaps, because of – a still-recovering economy, biodiversity markets achieved a record volume in 2010, with the value of transactions topping US $3 billion, according to a new report by Ecosystem Marketplace, the 2011 Update: State of Biodiversity Markets released on June 27th.

That puts biodiversity markets – which include offsets and other compensation mechanisms – at more than seven times the size of the global voluntary carbon market.

The numbers reflect a growing awareness of the need to conserve biodiversity even as governments look to cut costs, say several market participants who contributed to the report.

“The groundswell of interest in conservation banking and markets reflects the dawning realization both that we are dependent on biodiversity, and that it has value in the economy,” says Susie Brownlie, a principal with South African environmental consultancy deVilliers Brownlie Associates.

“With many parts of the world in economic difficulty, markets for environmental protection are more important than ever before,” adds Michelle Gane, Project Manager Institute for Sustainable Resources Queensland University of Technology.

The report also identified a massive gap between developed and developing-country use of biodiversity offsets and banking, and some intriguing new players in the biodiversity market (One word: Wal-mart).

The report, a companion piece to last year’s State of Biodiversity Markets report, summarizes the latest activity in compensatory mitigation programs and policies around the world over the past year. As documented in the new report, compensatory mitigation mechanisms run the gamut from strict like-for-like offsets to less-direct efforts to compensate for impacts via financial contributions and land protection.

The majority of the dollar volume of market activity is transacted through ‘biodiversity banks’ or ‘mitigation banks’ that restore land to ecological health to generate offsets. Parties that negatively impact habitats through development, like real estate developers, mining firms, or transportation agencies, can buy the offsets to mitigate their damage.

Properly structured, compensatory mitigation delivers a net environmental benefit: the restored natural habitat is both larger than the area damaged and better integrated into the regional ecosystem. Around 70 percent of species banks are private operations that seek to earn a profit; others are run by government or non-profit organizations.

The ultimate premise behind compensatory mitigation is the idea that we enjoy real – and often irreplaceable – economic benefits from biodiversity, and that we would do well to capture these values in our economic decision-making. That concept took wings in 2010, dubbed the ‘International Year of Biodiversity’, which saw the launch of The Economics of Ecosystems and Biodiversity (TEEB) reports and the 10th Conference of Parties of the Convention on Biological Diversity (CBD COP10) meeting in Nagoya, Japan.

As the use of market mechanisms increases, there’s a concurrent need for more and better information about biodiversity markets. As the new report notes, for roughly 80 percent of transactions, price data is unavailable, meaning that the market is probably much larger than the US $2.4-$4 billion that Ecosystem Marketplace was able to track. That’s up from the US $1.8-$2.9 billion worth of payments that Ecosystem Marketplace recorded in 2009.

That increase can be attributed to both growth in payments and greater market transparency. Ecosystem Marketplace, for example, found a US $400-$700 million increase in US wetland and stream banking transactions last year, as well as nearly US $2 million worth of previously untracked activity in the US market.

The US wetland and stream banking market still represents the bulk of biodiversity finance, accounting for between US $2 and $3.6 billion of payments tracked in 2010. However, Australia’s use of biodiversity offsets and compensation is growing very fast. South Australia’s and New South Wales’ Property Vegetation Plan offsets alone are conserving more than 20,000 hectares per year, and these are just two of an array of regional programs.

Europe is also on track to expand its use of market tools for biodiversity protection; a new European Commission strategy aims to develop a ‘no net loss’ biodiversity strategy by 2015 that embraces compensation mechanisms, and countries like Germany, the UK, and France continue to develop their own national biodiversity banks.

Biodiversity offsets and banking are still very much a developed-world phenomenon. In other parts of the world, markets are in their very early stages, with activity consisting mostly of policy framework development, and not implementation. Vietnam’s new environmental compensation decree and Namibia’s strategic environmental management plan to protect biodiversity amidst a uranium mining boom – both detailed in the report – are two bright spots.

On a side note, the question of how market mechanisms can be used to finance biodiversity conservation in developing countries is the subject of an upcoming webinar Ecosystem Marketplace is co-hosting with Mission Markets, “Biodiversity Markets: Challenges and Opportunities in the Developing World”, on July 11th at 10 am EDT (2pm GMT). Panelists include Ecosystem Marketplace’s Becca Madsen, Kaavya Varma of the GIST Advisory, Jaime Cavelier of The Global Environmental Facility (GEF), and Andrew Bovarnick of the United Nations Development Program (UNDP). Click here to register.

Two Steps Forward, One Step Back

The past year was also marked by some backsliding in support for markets, particularly on the policy side. Political will seems to be eroding in Brazil, which recently took the teeth out of its Forest Code, and in Alberta, Canada, where the future of its ‘no net loss’ wetlands policy is at risk as policymakers cave to the oilsands industry.

The 2011 Update also highlights how biodiversity offsets are increasingly being taken up by the business sector as a way to reduce their environmental footprints. Wal-mart’s “Acres for America” program, for example, was responsible for 88,000 ha worth of conservation in 2010. This dwarfs the amount of land (about 15,000 ha) protected under more traditional wetland & stream mitigation banking and conservation banking in the US. It should be noted that “Acres for America” doesn’t offset impacts on a like-for-like basis but instead the basic footprint of stores the company plans to open.

Biodiversity markets are also being eyed as a way for corporations to limit their environmental impacts all along the supply chain.

A Race Against Time

All in all, findings suggest that biodiversity markets are in for some big changes in the coming years.

As the business community and developing countries get in the game, biodiversity market mechanisms are striking in their diversity around the world – from the EU-wide ‘no-net-loss’ biodiversity targets, to unconnected state-level programs in Australia, to protecting biodiversity through more traditional PES mechanisms in Central and South America. The question isn’t whether market growth will continue, but whether it can keep pace with global biodiversity loss. Stay tuned.

Genevieve Bennett is the Water Markets Intern at Ecosystem Marketplace. She can be reached at [email protected]