The UN has declared 2010 the International Year of Biodiversity, but the UN’s Convention on Biological Diversity (CBD) remains the poor (and largely forgotten) sibling to the headline-grabbing climate-change convention (UNFCCC).  Delegates to CBD talks in Nairobi are looking at schemes designed to change that, in part by embedding more biodiversity values in the global carbon market. 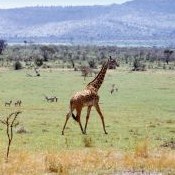 The UN has declared 2010 the International Year of Biodiversity, but the UN’s Convention on Biological Diversity (CBD) remains the poor (and largely forgotten) sibling to the headline-grabbing climate-change convention (UNFCCC). Delegates to CBD talks in Nairobi this week and next are looking at schemes designed to change that, in part by embedding more biodiversity values in the global carbon market.

Second in the series “Building the Biodiversity Marketplace”

10 May 2010 | NAIROBI | “I’ve been in these talks for years, and it’s frustrating,” says Horst Korn, who heads the biodiversity unit for Germany’s Federal Agency for the Conservation of Nature (Bundesamt fí¼r Naturschutz, BfN). “We need them, but they don’t need us.”

The “we” are the parties to the United Nations Convention on Biological Diversity (CBD), a global treaty spawned at the 1992 Earth Summit in Rio de Janeiro to promote means of conserving biodiversity and sharing genetic resources. It came into force in 1993, and is supposed to lead to a new ten-year treaty being signed in October of this year in Nagoya, Japan.

The “them” are the parties to the United Nations Framework Convention on Climate Change (UNFCCC), which also came together at the Rio Summit, but didn’t come into force until 1994. It’s designed to promote means of reducing greenhouse gasses in the atmosphere and reversing climate change, and hit a financing home run with the Kyoto Protocol’s Clean Development Mechanism (CDM), which helped create the global carbon markets that have the potential to mobilize billions in funding for the preservation of rainforests.

“Activities under the CBD can have positive effects for climate-change mitigation, but are not seen as affecting anything under the climate change convention,” said Korn today, while participating in a side event during a meeting of a key rule-making body of the CBD this week and next at the headquarters of the United Nations Environment Programme (UNEP) in Nairobi, Kenya.

The meeting is part of an ongoing process designed to forge agreement on how to measure, monitor, and promote the preservation of biodiversity. This agreement should, in theory, become a cornerstone of the treaty that everyone is angling towards this year.

This is the fourteenth time that the rule-making body (specifically, the Subsidiary Body on Scientific, Technical and Technological Advice, or “SBSTTA”) has met, and their plate is a full one. “Biodiversity and Climate Change” is just one of technical issues they’re addressing at this meeting, but it could be one of the most important in terms of attracting money.

The UNFCCC has its own Subsidiary Body for Scientific and Technological Advice (SBSTA), which will be meeting in Bonn from May 31 to June 9. That’s less than two weeks after the CBD meeting wraps up, and CBD delegates in Nairobi hope to generate concrete proposals that can be fed into that meeting.

The challenge will be feeding those proposals into the UNFCCC in a form it can digest – no easy task, even though most of the parties are members of both conventions. That’s not only because the CBD and the UNFCCC have different mandates, but also because they are dealing in completely different products.

“We don’t really have the one-size-fits-all product like the climate-change guys do,” says Korn. “Biodiversity needs different ecosystem solutions for different regions; there’s no currency in the diversity of life as in carbon, and taking biodiversity into account actually makes mitigation projects more expensive.”

“On the climate-change side, they’ll be looking at REDD-plus,” says Gary Steindlegger, Manager of WWF International’s Forest Programme, referring to UNFCCC efforts to reach agreement on how to use market mechanisms to incentivize Reduced Emissions from Deforestation and forest Degratation (REDD), as well as well as for promoting forest conservation, enhancement of forest carbon stocks, and sustainable forest management (REDD-plus).

“The key question is how to properly design REDD-plus so as to convince the respective decision-makers to adopt these properly-designed REDD-plus programs in their processes,” adds Steindlegger.

That begs the question: what, exactly, can the CBD offer the UNFCCC?

“We have the ecosystem approach to deal with large-scale management issues,” says Korn. “A lot of the large-scale mitigation activities run into trouble with local stakeholders and indigenous people because climate-change thought tends to proceed on technical terms and not so much on the whole social issue.”

That’s a key selling point in the voluntary carbon markets, where companies make reductions even thought they aren’t forced to do so. In such cases, the story behind a carbon reduction is just as important as the reduction itself, especially in forest carbon markets.

Anything beyond the amount of carbon stored is viewed as a “co-benefit”, but these co-benefits have tended to play a small role in bottom-line compliance markets.

The CBD is developing an approach to total ecosystem valuation that Korn hopes will provide a way of providing income that helps support the conservation of forests, wetlands, and peat bogs, among other things.

“Preserving these types of ecosystems is a cost-effective way of mitigate climate change, but until now it’s not something you can make money with,” he says. “From the economic point of view, it’s still more practical to destroy peat bogs and plant palm oil trees there.”

Three tools will be getting plenty of attention these two weeks, and we’ll be covering each of them in more detail as talks continue.

The first is a global effort to map complementary biodiversity and carbon values. Sponsored by the United Nations Environment Programme’s World Conservation Monitoring Centre (UNEP WCMC), the carbon and biodiversity atlas is designed to help individual nations understand the value of potential co-benefits under an emerging REDD-plus regime.

The second is an online platform called LifeWeb, which is based on platforms developed in the voluntary carbon market. It is designed to help groups that need funding for biodiversity projects distill their needs into simple terms that potential donors can evaluate simply and transparently.

The third is an effort to create a completely new financing mechanism for biodiversity projects. Dubbed the Green Development Mechanism (GDM), this effort aims to create an international currency for biodiversity offsets that proponents hope will more actively promote economic development in the developing world.