Though demand for forest carbon offsets grew 17% in 2013, market participants recognize the need to scale up faster in order to curb emissions from deforestation and land-use change. Attendees at Ecosystem Marketplace’s launch of the State of the Forest Carbon Markets 2014 at the World Bank last Friday discussed the policy developments that could guide growth and how the certification of co-benefits could shape demand 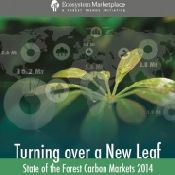 24 November 2014 | Much of the discussion during next month’s international climate negotiations in Lima, Peru will revolve around halting tropical forest loss to reduce global greenhouse gas (GHG) emissions. But Ecosystem Marketplace’s latest report on the voluntary and compliance markets shows forest carbon projects already having an impact an impact that could multiply if the right policy signals are sent.

The global markets for offsets from agriculture, forestry, and other land-use projects transacted 32.7 million tonnes (MtCO2e) in 2013, a 17% increase from 2012 and tying with 2010 for the highest demand tracked by Ecosystem Marketplace as part of its State of the Forest Carbon Markets report series.

The forest carbon market surpassed a critical milestone last year by topping $1 billion in cumulative value. “That brings up the big question of whether $1 billion is enough and the obvious answer is no, said Allie Goldstein, Ecosystem Marketplace’s Forest Carbon Associate and co-author of this year’s report. “Although deforestation rates have declined since the early 2000s, deforestation and other land-use change still accounts for 14% of greenhouse gas emissions in the world. That’s more than fossil fuel use in Africa, Central and South America combined.

Last year’s market value of $192 million represented an 11% drop from 2012 as average offset prices fell to $5.2 per tonne of carbon dioxide equivalent (tCO2e), down from $7.8/tCO2e, due in part to classic supply-demand dynamics and a perceived flood of offsets into the marketplace, she observed. Forest carbon offset prices ranged from less than $1/tCO2e for “legacy offsets sold on the Chicago Climate Exchange the voluntary, but legally binding carbon cap-and-trade program launched in the United States in 2003 to more than $100/tCO2e for improved forest management (IFM) offsets sold to Japanese buyers purchasing domestic offsets as part of the country’s proprietary J-Credit Scheme.

More than 80% of offsets transacted from projects that reduce emissions from deforestation (REDD), and the majority of those were sourced from Latin America, which tripled from 2012 activity and held almost half of overall market share last year. Avoided deforestation projects now cover almost 30 million hectares, about the size of the forest area of Malaysia.

“To me, that’s a strong sign that REDD is finding more traction, not only on the ground, but in the marketplace, said Michael Jenkins, President of Forest Trends, the parent organization of Ecosystem Marketplace.

An early example of public sector “payment-for-performance for REDD was evidenced in the state of Acre, Brazil, which secured a $40 million agreement with German development bank KfW for 8 MtCO2e in emissions reductions. Dozens of other jurisdictional REDD programs are under development.

“What we are seeing is definitely a shift in focus toward going to a jurisdictional scale and going to scale,said Ellysar Baroudy, Lead Carbon Finance Specialist for the World Bank, which manages several funds dedicated to supporting efforts to implement national REDD+ programs on several continents.

Forest carbon projects provided many “fairly impressive co-benefits in 2013, including 9,000 jobs; 13 million hectares of habitat for endangered species; and $41 million in education, health care, and infrastructure, Goldstein said. Direct employment and training and capacity building were the most commonly-reported co-benefits of forest carbon projects.

“One thing I was really pleased to see in the report was the quantification of co-benefits, Baroudy said. “I think that is hugely important. I think if we do want to move forward with REDD programs and projects, this is a vital part and a piece of this that we need to see more of.

In a nod to the rising attention paid to the community and biodiversity outcomes of carbon offset projects, the Verified Carbon Standard (VCS) assumed the day-to-day management of the Climate, Community and Biodiversity (CCB) Standard last week. More than 70% of forest carbon offsets developed under VCS also pursued certification with CCB, according to the report.

The VCS remained the most popular voluntary standard in the forest carbon markets, with projects developed according to VCS methodologies transacting 14.6 MtCO2e, or 46% of all market activity. However, internal or proprietary standards used for only one or two projects made a surprising comeback after years of consolidation, with about 12.6 MtCO2e transacted under these standards. The largest internal standard is the Acre Carbon Standard, used by the Brazilian state to track performance against emissions reductions targets as Acre continues its pilot under VCS jurisdictional nested REDD+ standard.

Developers cited several reasons for this trend, including the costs of validation and verification under third-party standards, language barriers and relationships with buyers who are often unconcerned by the use of internal or proprietary standards, Goldstein said.

However, Alterra Hetzel, Forest Carbon Business Development Manager for the Conservation Fund, questioned whether the rise of these standards was a positive or negative development for the market. “I feel like in the absence of policy, it is our third-party standards that have kept the industry honest and set the bar, she said.

“I think it’s a troubling development because at the end of the day these markets only exist to the extent they have credibility behind them, to the extent people can understand what they’re getting, said Rick Saines, Principal with law firm Baker and McKenzie. “I’m not suggesting that the leading standard should automatically be anointed dominion over everything, although it wouldn’t be the worst thing in the world.

Where in the World are the Buyers?

Voluntary offset buyers purchased the majority (89%) of forest carbon offsets in 2013, led by energy utilities and food and beverage companies seeking to meet corporate social responsibility commitments or demonstrate industry leadership on climate change. However, compliance-driven purchases are set to gain an expanded foothold in the market due to expected increases in demand from new carbon markets such as California’s cap-and-trade program or emerging carbon pricing regulations in South Africa and China.

European buyers were again the largest source of demand for forestry emissions reductions last year, purchasing two-thirds of tonnes associated with a buyer and comprising the largest source of demand for projects based in Latin America, Asia, and Africa. Europeans buyers also purchased half a million tonnes of forestry offsets within insular domestic markets, including the United Kingdom’s Woodland Carbon Code.

In North America, more than half of the 2.6 MtCO2e transacted were for buyers either already subject to California’s program which officially launched in January 2013 or anticipating such regulation.

“I would be hesitant to say we’ll see a huge uptick next year in the compliance offset sales, she said. “There’s some reluctance in the California market right now given the recent Clean Harbors investigation, the slow issuance of (state-issued offsets) and the low allowance prices. But I expect the impact will grow, especially as we look to the second compliance period and the introduction of the transportation sector and a much-bigger market, and therefore hopefully much greater demand.

Oceania was the 3rd largest source of demand for forest carbon offsets in 2013, transacting 1.5 MtCO2e roughly half of previous volumes. New Zealand, home of the world’s second-oldest Emissions Trading System, chose not to participate in the second phase of the Kyoto Protocol, and forestry project transactions nearly ground to a halt due to competition from less expensive international offsets. And as proponents of Australia’s Carbon Farming Initiative feared, 2012’s $40-million influx of carbon payments was not repeated in 2013 because of the anticipated repeal of the country’s carbon tax, which occurred in July 2014.

The Road to Lima and Paris

On the international level, some policy developments could emerge to correct the supply-demand imbalance that currently exists in the forest carbon markets. The New York Declaration on Forests with its commitments from so many of the largest stakeholders to work to cut forest loss in half by 2020 and completely end it by 2030 could spur increased demand for land-based emissions reductions. However, only about $1 billion in confirmed financial pledges are attached to the declaration to date.

“The New York Declaration was interesting, Baroudy said. “It did inject new hope. There was a clear commitment from a number of donors that they would continue the financing of REDD. That will be financing for large-scale jurisdictional approaches because those donors have really staked a lot of their claims in that respect.

Developers and other stakeholders are also carefully watching the United Nations Framework Convention on Climate Change (UNFCCC) process to see what kind of policy signals emerge from the next round of Conference of Parties (COP) negotiations in Lima next month and in Paris in 2015.

“We do need to see land use in the Paris agreement, Baroudy said. “I think it will be telling to see what’s happening in Lima, but I hope there is momentum.

The uncertainty, however, is troubling, as is the idea among some negotiators that the REDD puzzle was solved when the UNFCCC parties agreed on the REDD Rulebook the guidance on how to harvest available data on forests to create deforestation levels to be recognized by the UNFCCCœ at last year’s Warsaw COP, Saines said.

“But we’re not there yet on REDD to actually create the means by which financing, public and private, can really invest at the scale so that when we meet in a few years from now we’re not talking about $200 million we’re talking exponentially greater than that, he said. “That’s what the promise is. That’s what the obligation is of all of us in the space to make sure it happens.

Gloria Gonzalez is the Senior Associate of Ecosystem Marketplace’s Carbon Program and a co-author of the State of the Forest Carbon Markets 2014 report. She can be reached at [email protected]