Environmental NGO EcoLogic has big plans for a bi-national fisheries project between Belize and Guatemala that will ultimately build an organized union of local fisherfolk with decision-making capabilities over the region’s natural resource management and, as a possible byproduct, empower them to meet the looming threat of oil exploitation. 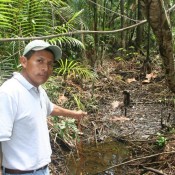 Environmental NGO EcoLogic has big plans for a bi-national fisheries project between Belize and Guatemala that will ultimately build an organized union of local fisherfolk with decision-making capabilities over the region’s natural resource management and, as a possible byproduct, empower them to meet the looming threat of oil exploitation.

26June 2013 | The little nation of Belize is covered in rainforests, wetlands and mangroves rich in biodiversity and natural resources. It is one of the most forested Central American nations and contains part of the Mesoamerican Biological Corridor, a habitat corridor that stretches through the region linking natural parks and nature refuges.

But Belize is struggling to maintain these globally significant ecosystems. It is facing threats from development, oil exploration and illegal logging and timber harvesting with the federal government doing nothing to prevent these activities and even inviting extractive companies into protected areas.

Between 2004 and 2010, 85% of deforestation in Belize occurred in its three administrative districts that share a border with Guatemala. In those three districts, a total of 6,375 hectares of forest was lost, according to a CIAT (International Center for Tropical Agriculture) study.

The relationship between Belize and Guatemala is complex. The history goes back hundreds of years and begins with a territorial dispute between Spain and Britain over who rightfully owned the region that would later become Belize. Guatemala has picked up the feud after gaining its independence from Spain and argues 4,900 square miles of Belizean land – which amounts to over half of the country – belongs to them. The entire nation of Belize is roughly the size of New Hampshire.

This conflict has resulted in illegal settlements, logging and fishing as well as poaching of the area’s wildlife. To make matters worse for Belize, their forests are also being threatened by the development and oil exploration threats.

In an attempt to help resolve these conflicts, the EcoLogic Development Fund is working to establish a bi-national fisheries project between communities residing along both sides of the Sarstoon River-the body of water that forms Belize’s southern boundary with Guatemala. Creating a project in an internationally-disputed territory is unusual and something most organizations shy away from. But because poverty is the driving force behind Guatemala’s actions, EcoLogic believes establishing a healthy working relationship between the two nations could solve several of the regional conflicts.

“On both sides, people are struggling for survival,” says David Kramer, Senior Manager of Impact, Learning and Innovation at EcoLogic. “In Guatemala, there are population pressures and hunger issues to deal with.”

The project would cover the Amatique Bay region, which the Sarstoon River empties into. EcoLogic works with local communities to protect biodiversity in Latin America and Mexico by fostering good land stewardship and developing sustainable livelihoods.

“This area really matters for livelihood,” says Kramer. “We believe a project in this area can be a model for coastal zone management and trans boundary cooperation that can be used around the world.”

A Project in the Works

The fisheries project, which is known as the Cross Border Alliance for Healthy Fisheries, is still in development, but ultimately it aims to ensure that the rural fishing communities play a lead role in forging and implementing marine conservation agreements. A good portion of the population living there are either fishermen or other people whose livelihood depends on the ocean in some way. These Belizean communities, which EcoLogic began working with before the start of this project, were struggling with Guatemalans fishing in their territory. Becasue Guatemala has more people, Belize felt they were being crowded out of the area. The fishing situation added tension to the already tense border between the two nations.

The project proposes that for any fisheries agreement to succeed, it has to address food security, local livelihoods and economic well-being. When it comes to sharing resources, mutual trust between stakeholders in Belize and Guatemala must be established as well.

EcoLogic aims to serve as a catalyst of transformational change in the way the Amatique Bay fisheries are perceived and exploited, resulting in a more socially and environmentally sustainable region, a proposal for the project reads. They seek to ensure that conservation and governance is based on sound science and understands the economic and social factors of the region’s peoples.

Working with local partners is one way EcoLogic can ensure their project will yield positive results for the population living in the region. They helped found the Sarstoon Temash Institute for Indigenous Management (SATIIM) in 1999. The organization co-manages with Belize’s Forestry Department the area between the Sarstoon and Temash Rivers that makes up the Sarstoon Temash National Park. There are large indigenous populations-primarily the Maya group- living in this region and SATIIM enables them with a voice in how this territory is managed.

SATIIM is involved in the fisheries project at a grassroots level. The executive director, Gregorio Ch’oc, has been engaged with educational outreach on topics like fishing for non-endangered species and fish processing.

EcoLogic’s project is designed to be flexible, and it will have to be in order to meet certain challenges. Toledo, for instance, is Belize’s southernmost district. It’s located on the Belizean side of the Sarstoon River and is the country’s poorest and least developed district and thus vulnerable to exploitation. Oil exploration companies like US Capital Energy hire local people for temporary manual labour jobs or pay them to use their boats, according to EcoLogic. Such activities bring short-term income, but ultimately contribute to the destruction of fisheries on which the local economy relies.

EcoLogic is aware of activities like these and has added it to the list of reasons why promoting alternative livelihoods in the region is so vital. Coordinating on fishing regulations for instance, between Guatemala and Belize could form lasting cooperation between them.

Whether intentionally or not, extractive companies often use a divide-and-conquer approach when dealing with local populations, Kramer says. Buying off a few individuals erodes public trust and social capital.

And despite clear public support for conservation, the Belizean government – possibly because of a budget crisis and struggling economy but also because of corruption – has opened up protected areas for extractive activities like oil exploration. Last year, the government approved US Capital Energy’s application to drill exploratory wells in the Sarstoon National Park, despite the Belizean National Parks Act, which bans oil extraction in national parks.

The position Belize’s government has chosen to take makes a challenging situation more difficult and continues to hinder the rural populations from having a say in how the territory they live in is managed and what activities are permitted to take place.

According to SATIIM, last year at a public meeting in Toledo with US Capital Energy and the Department of Environment, indigenous groups were not given the chance to express their views. The meeting was over an environmental impact assessment (EIA) for US Capital Energy to drill in the Sarstoon Temash National Park.

While EcoLogic is strongly against any extractive activity in the Amatique Bay, the project’s aim, Kramer says, isn’t to fight oil extraction directly. Rather, it is to support local partners to advocate for their interests and work with local communities to ensure they have the tools they need in order to have a solid say over how the region’s land and natural resources are managed.

Since the project is still in its early days, the main goal right now is to create an alliance of fisherfolk in the region.

And while not specifically a goal of EcoLogic’s project, organized fisherfolk and communities with decision-making capabilities will be better equipped to face potential exploitation from oil companies as well as their government.