To ensure reilable supplies of clean water, Bolivian water users asked upland farmers what it would take for them to maintain the watershed.  The answers were surprising, and the result is a unique payments for watershed services program that may incentivize watershed conservation across the Andes and around the world. 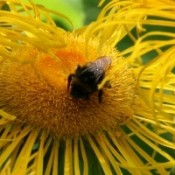 10 August 2012 | Diovigildio Ayala grew up on the rugged slopes of Bolivia’s Santa Cruz Valley, where he learned the value of bees as pollinators, honeymakers – and moneymakers. So when Fundacií³n Natura Bolivia (the Bolivian Nature Foundation, “Natura”) offered him bolivanos to change the way he worked the slopes, he said he’d rather get paid in bees.

“If I receive cash, I know I will spend it right away,” says Ayala. “Instead, I want these payments to create something that lasts.”

Natura is working to enfranchise farmers and marshal community support in a payments for watershed services (PES) program that appears both sustainable and replicable. And it is via process automation that officials at the locally based NGO hope to speed the uptake of similar PES programs in communities around the country and elsewhere in Latin America.

“Because [PES] is an alien concept, even using those words can cause resistance,” says Nigel Asquith, science director at Natura, which draws funding from a variety of international sources. “People intrinsically want to protect the forest, but they can’t do it because they need to feed their families. If we can show them how to strengthen local institutions and ways to align their interests, then it becomes a fairly simple to get the model in place.”

Natura has worked for eight years to develop its PES model and to roll it out over a widening swathe of the Santa Cruz Valleys, some 16 hours by car from La Paz. By creating water funds through which line-item charges from downstream rate-payers and subsidies from donors are channeled to landowners in the watershed, Natura is creating what directors see as a sustainable means to ensure the uplands that feed a water system used by 1.5 million people are less susceptible to deforestation and thus meeting the organization’s stated mandate of fostering biodiversity.

At present, Natura   is evaluating the latest permutation in a series of developments that has seen an initial plot of 500 hectares of protected forest grow to comprises some 22,000 hectares in the department of Santa Cruz , a state the size of Montana on the Western edge of the Amazon plain. Depending on the outcome and on the interest of residents, the PES that embraces half of the communities along the Rio Grande water course that snakes down from the surrounding highlands will be extended to those held out of an initial, randomized implementation phase.

“Turning the intervention into scientific process means having robust controls that treat communities in the same way,” says Natura’s Asquith. “ We can’t scale up to have a large-scale impact if we have to negotiate individual contracts. But if we implement the model using precautionary principles – as opposed to doing all sorts of pre-process studies – we see if it works and then look at how we can do it better.”

Similar to PES programs of the type at work in places like the Ecuadoran capital of Quito or national schemes in Costa Rica and Mexico, water funds in the Santa Cruz Valleys region are aimed at people whose livelihoods impact the watersheds. However, instead of cash payments, terms of the PES contracts see each fund’s pooled contributions used to purchase goods that enable landowners in the watershed area to derive alternative sources of income to logging and agriculture.

Initially, Natura worked with stakeholders to distribute beehives and equipment for making honey. But in a land where a lack of delineated property rights proved an impediment in getting the PES program in place, the payouts soon grew to embrace the barbed wire that enables farmers in the uplands to demarcate and section their holdings, as well as fruit trees and building materials to support their operations.

The development of the Santa Cruz water fund reflect the dynamics at work in rural Bolivia, a place where – bar a legal framework for property ownership that dates from the 1800s – central government exerts little influence on watershed management. The indigenous practices that fill this gap tend to foster an inherent popular awareness of the need to protect supplies – agricultural users routinely pay monthly or annual fees to local water cooperatives for maintaining the irrigation infrastructure – as well as a corresponding suspicion both among watershed landowners and water users about the enforceability of PES-type contracts.

In order to lessen the perceived risk, Natura seeds water funds with donor cash and provides the technical support for implementation and monitoring. It is a strategy borne from experimentation and refinement as the program has expanded from the Los Negros cloud forest to embrace the Rio Grande-Valles Cruceí±os Protected Area, a 734,000-hectare zone created in 2007 to link national forests in a biodiversity corridor on the Eastern slopes of the Andes.

Natura employs both old-fashioned canvassing and modern technology in order to quantify the volumes of land devoted to the program and identify who owns them, to demonstrate the scope of the threat of deforestation and the effects of conservation on the watershed. And, it works with stakeholders, including water authorities and municipal governments, to devise terms that address the needs both of downstream ratepayers and of upland beneficiaries.

“The model is cheap, efficient and transparent,” says Maria Teresa Vargas, NATURA’s executive director, who initiated the negotiations that created the program in Los Negros. “ Each party pays its own costs, including technician salaries, fuel and other expenses, so that every single dollar that enters the water fund is invested in upstream conservation. The accounts of the water co-operatives are open for all members to see, so there is simply no space for mismanagement or misappropriation of funds.”

The current phase of development, in which a year-long trial of the PES among half the 130 communities that surround the city of Santa Cruz is being evaluated ahead of expansion, marks another step in the program’s evolution. In order to implement the scheme across so wide an area, Natura had to adapt its processes to boost the pace of implementation.

Working with the Sustainability Science Program at Harvard University in the US, Natura officials developed the surveys and the rigid, if-then protocols necessary to assess the socio-economic needs of the 2700 families in the affected communities, their attitudes to conservation and their effects on the watershed. In the summer of 2011, a lottery was held to determine which communities would be eligible for the program that compensates farmers with hives and fruit trees for conserving forest adjacent to the river and its tributaries, and throughout the year both sets of communities have been updated regularly on the effects of the PES uptake.

Following completion of the assessment in 2013, Natura hopes to offer scientific evidence that the PES is working to improve water quality as eligibility parameters are extended beyond 100 meters of the water course. The expansion also will embrace the farmers, dubbed the ‘control group’ by researchers, in communities held out of the initial trial during the lottery selection.

“There is no better way of assessing whether an intervention actually works than through a randomized experiment,” says Kelsey Jack, a professor at Tufts University in Boston, MA, who worked with Natura on the evaluation methodology. “What is increasingly clear is that effective conservation and development requires evidence about what works, including the sometimes surprising ways that potential beneficiaries respond to the proposed interventions.”

Notwithstanding the outcomes around Santa Cruz versus baseline indicators, the Natura PES is providing a platform for sustainable land use in watershed areas. According to Asquith, the water fund to which ratepayers in the region contribute covered some 72% of the $158,000 in goods distributed to 400 farmers that joined the trial – around 35% of those eligible – in 2011. With donors and local government contributing the remainder, the percentage offers a measure of program efficiency in reducing its reliance on non-local sources.

Meanwhile, the standardization involved in creating the baselines for the 130-community expansion works to automate the negotiations – such as deciding compensation and eligibility – that initially proved among the most time-consuming activities in setting up funds.   It is this codification that is expected to speed creation of locally based, locally beneficial water funds among communities seeking to implement PES schemes based on water funds

The Mexican government has approached Natura about advising on how to align a national PES scheme and municipal watershed protection efforts with the goal of developing alternatives to the top-down distribution of cash subsidies. Meanwhile, Rare, a US-based non-profit that provides support for public awareness initiatives that are allied to conservation efforts is partnering with two dozen local agencies across four Latin American countries to implement PES schemes using the Natura model.

“Take something that’s working for conservation locally and simplify it so that it can taught to others; so they can adapt it to local conditions and replicate it,” says Keith Alger, vice-president for Latin America at Arlington, VA,-based Rare, which calls Natura a ‘bright spot’ in creating the beneficial agreements among stakeholders that make efforts to protect biodiversity sustainable. “It’s a robust, locally owned solution that if we waited for it to proliferate throughout the region on its own, we’d still be waiting.”