When geography teacher Beatrice Ahimbisibwe and a handful of Ugandan farmers started planting trees to earn carbon credits in 2003, their neighbors thought they were crazy.  Many of those neighbors have since joined her as the handful grew to more than 300 participating in a sophisticated income-sharing arrangement that can serve as a model for similar communities around the world. 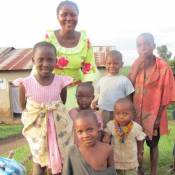 When geography teacher Beatrice Ahimbisibwe and a handful of Ugandan farmers started planting trees to earn carbon credits in 2003, their neighbors thought they were crazy.   Many of those neighbors have since joined her as the handful grew to more than 300 participating in a sophisticated income-sharing arrangement that can serve as a model for similar communities around the world.

31 August 2011 | Beatrice Ahimbisibwe spent much of April registering students at a new primary school   in Bitereko, Uganda.   This may not seem like much—but it wouldn’t have been possible if she and four other Ugandan farmers hadn’t started planting trees nearly a decade ago to earn carbon credits under an arrangement spearheaded by local NGO Ecotrust.

When they cut the deal back in 2003, she and her small group were outliers.   Most people in the sub-county of Bitereko doubted that this new arrangement would work and many feared they would lose their land to the carbon credit buyers.   But Ahimbisibwe – a geography teacher – saw an opportunity to earn extra money by providing a needed ecosystem service, and she jumped in with both feet.

In a poor rural area with unpaved roads and no electricity, it is easy to understand how one would be doubtful of these new initiatives.   But Ahimbisibwe says that through her education and profession she both learned and taught about issues like pollution and climate change and she believed that planting trees could bring a real benefit – even if she had to wait for many years to sell the timber.

Investing in the Community

When Ecosystem Marketplace first visited her in 2005, Ahimbisibwe had just begun reforesting a one-hectare plot using native species which she hoped would sequester 62 tons of carbon over 10 years.   She sold these original credits for $8/ton, to be paid out in installments over the ten-year period, at the end of which she will have earned $452. (Some of the credits are deducted for a buffer to protect against any unforeseen damages.) Since then, she has planted an additional 2.5 hectare plot, which will generate 145 tons of carbon sequestration benefits.

Ahimbisibwe used the first payments to construct the new primary school in her neighborhood, purchase furniture for her current home, and begin construction on a new home.   In addition to these direct benefits, she has travelled locally and internationally, learned about different tree species and has served as a host to researchers interested in learning more about the project, become skilled at using a computer and has taken a strong leadership role in her community.   She is also able to share the substantial technical knowledge she has gained over time with other group members and farmers.

Kato Eriasaf, another founding member, created an agroforestry system on his property which incorporates shade-grown coffee under his carbon-sequestering trees and, on a separate plot, he introduced a few cows once the trees grew big enough that they would not be damaged by the livestock.   Kato has used the majority of the money earned thus far for the upkeep of his plots as well as for school fees for his children.

Seeing the success of the pioneers has encouraged many more people to join the Bitereko Carbon Community (BCC) to begin planting trees for carbon benefits.   In fact, now 316 individuals, 3 secondary schools, 1 primary school and 1 church are now all involved in reforestation activities.

Leading the Next Generation

Ahimbisibwe still teaches geography—but now she also teaches about trees.   At the Nkinga Vocational Secondary School, each of her teenage students is given charge of three trees, which they plant and then care for throughout the school year.   The hope is to plant over 1000 trees in the schoolyard that will provide shade for students and teach them to be responsible and care for the environment.   The school has already received its first payment, which helps to defray the tuition costs and purchase materials for students.

This awareness has helped spread the program beyond the school and into the surrounding community.   Tumwebaze has begun planting trees on his personal property and hopes to receive his first payment this year and at least three students have convinced their parents to join the carbon sequestration program with Ecotrust.

At Kigarama Mixed Secondary School, Headteacher Alfred Matovu hopes to encourage environmental responsibility amongst his students.   The patriotic club has volunteered to care for the trees planted behind the school and spends afternoons watering the saplings and clearing weeds from the area The students themselves are excited to teach visitors about their trees and how they care for them; and are also learning about the different species they have planted – some which will bear fruit for a sweet snack.

The carbon farmers in the Bitereko Carbon Community and other communities involved in Ecotrust projects do something very unique with their carbon profits: they share them.   In all carbon projects, for example, a certain percentage of credits – depending on the risk associated with delivering carbon credits – are set aside as a buffer to protect against the loss of these credits due to fire or strong winds.   These credits cannot be sold in the market at the beginning of a project; however, if they are not used and the risk decreases, they could potentially be sold throughout the project’s lifetime. In the case of Ahimbisibwe and other farmers in the Bitereko Carbon Community, 10% of the carbon credits generated are set aside for this purpose.

In addition, Ecotrust collects a supplementary 10% from the credits that are sold by each individual and pools the money into a Community Carbon Fund.   (Ten percent of Ahimbisibwe’s carbon money is added to 10% from Kato and 10% from the Vocational School to create a larger pool of resources.)   Once this fund reaches a certain level, the monies are transferred back to the community carbon group.

This money can be used in several ways.   First, it can be used to assist in the management of natural hazards that lead to carbon loss.   This includes protecting trees from fire, buying new saplings to replace those eaten by a wayward goat, or capacity building in the case of an epidemic, for example.

In Bitereko, the community has chosen to use the funds as a small rotating loan.   If a member needs cash to pay school fees, for instance, they can borrow money from the Bitereko Community Carbon Fund at a low interest rate and repay the loan as soon as they are able – making the money available for another family.

Additionally, members can choose to use the money to support projects that will benefit the greater community such as watershed management, sanitation, soil conservation or establishing an apiary.

All of these actions help the project’s standings within the Plan Vivo System. By ensuring community rewards and ecological integrity, they provide additional guarantees of carbon sequestration benefits to be delivered.

Ahimbisibwe and other early adopters are leading the way for other carbon farmers in Bitereko.   When we spoke with Kato, his young grandson was by his side, proud of the work his grandfather was doing.   The students at the schools participating in the project already understand the benefits that trees can provide for them and therefore have a greater respect for nature and our planet.

Ahimbisibwe presented the work that she has been doing at the Training for Community Stakeholders on Payment for Ecosystem Services event in Hoima, Uganda, delivered by Forest Trend’s Communities and Markets Program and the Katoomba Group, with such dignity and delight that all of the other participants began to see how these complex payment schemes can bring tangible benefits to their lives.

Forest Trends’ Communities and Markets Program has run several similar trainings for community leaders globally.   In each case, when a community leader stands up to speak about his or her experience with a PES project – whether Ahimbisibwe, Almir Surui– participants seem to become more excited and interested when one of their peers is able to present a real case and bring these concepts “down to earth.”   With this in mind, the Communities and Markets Program is beginning to form a network of community leaders interested in PES (focusing on Latin America initially) to share experiences and lessons learned from projects and policy initiatives. (If you’re interested in participating in this network, please email Rebecca Vonada).

Experiences such as that of Ahimbisibwe can provide insight for how small landholders and local communities can be included in climate change mitigation strategies.   The landscape of Bitereko has already changed significantly in the past 8 years, along with the attitude of the new generation.   The students are excited about protecting the natural resources in their community. Many times rural and indigenous communities are the first to feel the impacts of climate change, but at the same time, they are largely excluded from any decision-making processes.   As the international community works towards designing new agreements and mechanisms, lessons learned from existing experiences should be incorporated to maximize benefits for all of those involved.