Wetland Mitigation Banking has proven to be one of the most environmentally effective and economically efficient ways of  compensating for wetland and stream loss. T.J. Mascia and Charlotte Brett say the water-rich state of New York should be a hotbed of mitigation banking activity – but isn’t. Here’s their diagnosis and prescription. 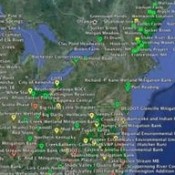 20 March 2013 | Wetland Mitigation Banking is one of the great environmental successes of the past forty years. A $3 billion industry, it is credited with restoring and protecting 960,000 acres of wetlands, streams, and associated upland habitat across the United States. The National Research Council and Environmental Law Institute both credit it as the most successful type of compensatory mitigation for wetland and stream impacts, while the US Army Corps of Engineers (Corps) and US Environmental Protection Agency have identified it as the the federally preferred form of compensatory mitigation.

Many states, however, remain “mitigation banking deserts” – and not always with good reason. States that have few wetlands and/or little development may naturally have fewer opportunities to build mitigation banks.

But what about New York? The state has abundant streams and wetlands and one of the highest per-capita state gross domestic products, but there are currently just three mitigation banks within the entire state. In contrast, leading states such as California, Texas, Maine, and Virginia each have more than 50 wetland and stream banks. Ohio and New Jersey, which both fall within Corps regulatory districts that also cover New York, have over three times as many mitigation banks as New York. The barriers to mitigation banking, therefore, do not appear to lie within the regional or district levels, but rather fall within New York’s borders.

his raises a number of questions: What is keeping mitigation banks out of New York? What can be done to remove these barriers? And is it worth doing?

US Mitigation Banks as of January 2012

The State of New York is in the midst of two major energy infrastructure initiatives. The first initiative, the New York Energy Highway, was launched by Governor Cuomo early in 2012. It is intended to enhance electric system reliability and efficiency, encourage economic growth, and create jobs primarily through the construction of an improved transmission link between the ample generation capacity and wind power potential in upstate and western New York and the tremendous demand for electric power downstate. This initiative also aims to advance the renovation and replacement of older power plants with new cleaner technologies. The second initiative was launched by Governor Cuomo in November 2012, in the aftermath of Hurricane Sandy and the widespread power outages that devastated New York City and the surrounding region. This initiative seeks to identify priority projects that will strengthen the state’s electric power infrastructure to better withstand future severe weather events.

Both of these initiatives are significant. Together, they could result in the most infrastructure construction work that the state has seen in decades. The Energy Highway Blueprint, issued in October 2012, calls for the construction of transmission and generation projects totaling $5.7 billion during the next five to ten years. While no specific weather-related projects have yet been identified, electric industry experts estimate that the cost of meaningful improvements will be substantial. Adding to all of this are the potential impacts associated with fracking (i.e., natural gas extraction) development within the state, pending state approval.

Mitigation banking would help the state achieve these initiatives in a manner that is consistent with New York’s firmly established commitment to strict environmental protection. Banking will allow for more efficient permitting and ecologically sound mitigation of these projects. While there are currently several obstacles to the effective use of mitigation banking in New York, these obstacles are either overstated or are within state regulators’ capabilities to address.

Three explanations are commonly given for the absence of a thriving mitigation banking industry in New York: insufficient demand, small service areas, and/or restrictive state regulations. Let’s look at each in turn.

Demand for compensatory aquatic mitigation – though historically lower in New York than in some other states – exists within New York. From 2006 to 2008, there was an average of nearly 350 acres of required wetland mitigation per year generated by federally-permitted development in three upstate cities alone. In 2009, the Corps’ Buffalo District noted that the private market demand for a mitigation bank in one county in New York was “moderate to high.” The State Department of Environmental Conservation (DEC), which regulates wetlands 12.4 acres or larger, reviewed an annual average of more than 1,400 freshwater wetlands permits from 2002-2011 (actual permitted impacts or mitigation acres are not tracked by the DEC, according to a spokesman). Moreover, demand is likely to increase considerably due to the anticipated large-scale energy infrastructure projects noted above.

The size of service areas used for mitigation banks is another potential obstacle. New York regulatory agencies currently prefer using the HUC-8 for service area size. There are 59 HUC-8s in New York, representing areas ranging from less than 200 to more than 2,000 square miles. In some cases, the HUC-8 may be too small to generate adequate demand or present desirable siting options for mitigation banks, particularly those serving linear projects such as transmission lines, highways, and pipeline corridors.

This problem has been encountered elsewhere and has been addressed by providing larger service areas and/or establishing primary and secondary service areas to allow flexibility when needed. In 2007-2008, discussions with state transportation personnel responsible for wetland mitigation in North Dakota, Montana, Utah, Colorado, and Nebraska identified that all were either using or negotiating service areas larger than the HUC-8. Many states with successful mitigation banking programs – including Texas, Virginia, Ohio, and New Jersey – allow banks to group contiguous HUC-8s to form larger service areas or use adjacent HUC-8s as secondary service area options under certain circumstances. According to the Environmental Law Institute, while 14 of the 38 Corps districts use the HUC-8 as the primary service area boundary for compensatory mitigation, another 14 districts use HUCs in combination with other watershed or ecoregion classifications. In New York, discussions are presently ongoing regarding service area sizing for a single user bank being developed by the Federal Highway Administration and the New York State Department of Transportation; both HUC-8 and the larger HUC-6 classification are on the table. There is no blanket requirement that the HUC-8 must be used in New York, and federal guidance allows for flexibility in service area sizing – it even suggests that a HUC-6 may be more appropriate for rural areas, a category that applies to most of New York State. So there is both opportunity and precedent for increasing flexibility in New York with respect to service area sizing.

Then we have DEC’s mitigation regulations, which do not specifically address mitigation banks and do state that “mitigation must occur on or in the immediate vicinity of the site of the proposed project.” DEC has not offered any formal interpretation for “immediate vicinity.” In fact, it appears that DEC itself has felt constrained by this outdated language. Despite being a member of the interagency review team tasked with the consolidated review of proposed mitigation projects in New York, DEC has given reason to believe it would not sign the final instrument authorizing use of a proposed mitigation bank to offset all impacts within a specified service area. Instead, the agency would review each proposed permit transaction to determine whether its “immediate vicinity” criteria would be satisfied. This type of project-by-project review defeats the purpose of a planned, watershed-based mitigation program that is implemented in advance of impacts – which are primary benefits of mitigation banking. The resulting uncertainty drives prospective bankers to focus only on smaller (< 12.4 acres) wetlands that are outside of DEC’s jurisdiction when evaluating market opportunities and deciding where to make investments, even when unavoidable impacts are expected to occur in larger wetlands. Operating within these narrow confines, it is difficult for bankers to find opportunities with a favorable cost-benefit. This results in the visible trend of wetland banking investments being made outside of New York.

The State of New York would clearly benefit from a robust private mitigation banking market, and the required actions to facilitate such a market are well within the hands of the state’s policymakers.

First, DEC, the Corps, and other regulatory agencies overseeing CWA permitting in the state might consider expanding service areas beyond the HUC-8. DEC’s watershed maps represent a logical starting place in this effort. DEC uses these maps, which group contiguous HUC-8s together to form 17 watersheds in the state, for watershed management, monitoring, and assessment. Recognition of these watersheds as service areas for mitigation would not require a significant departure from existing policy.

Second, either DEC or the state General Assembly could formally rescind the “immediate vicinity” requirement and move toward a watershed approach to mitigation. This could be implemented by the legislature via statute or by DEC through an amended rulemaking. Such action would ensure that the state’s approach to compensatory mitigation is brought in line with current scientific data and practice, while opening the door to mitigation banking in the state.

Finally, the DEC, in collaboration with the interagency review team, could develop state guidance for mitigation banking. Such action would finally make good on a promise DEC made in its 1993 publication Freshwater Wetlands Regulation – Guidelines on Compensatory Mitigation to develop specific guidance on mitigation banking in New York. Through such guidance, the state could immediately reduce the constraints imposed by its “immediate vicinity” requirement by establishing a clear definition of this term – one that would incorporate and promote the use of mitigation banks. If, for example, DEC were to clarify that “immediate vicinity” should be interpreted broadly to mean within the same watershed, the barriers to banking previously imposed by this regulatory provision would be significantly reduced.

New York’s policymakers should take action to embrace mitigation banking. This will align the state with current scientific data demonstrating the ecologically preferable results where mitigation banking is used to offset wetland and stream impacts, make state policy consistent with the established regulatory preference for mitigation provided under federal law, expand business opportunities within the state, and provide another tool to enhance New York’s ecological resiliency. All of these are worthy goals, and the barriers that exist can be addressed now through reasonable action.