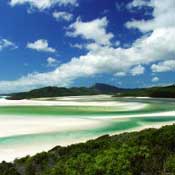 18 October 2006 | Australia is known for the natural beauty of its reefs and bushland and the rugged dryness of its barren red centre. Yet despite its fragile environment and relatively miniscule population impact on the planet (just 19 million residents), Australia is the world’s largest per capita emitter of greenhouse gases and along with the U.S., the only other industrialized nation not to ratify the Kyoto Protocol. According to Prime Minister John Howard, putting a price on carbon would cripple Australia’s economy and is simply not worth the costs. Australia’s nine states and territories disagree. In a world-first move, they have teamed up to propose a National Emissions Trading Scheme (NETS) aimed at putting Australia on a path to reduce emissions by 60% by 2050. A discussion paper released by the NETS Taskforce in August outlines the scheme’s plan to introduce mandatory emission limits for stationary energy generators. The proposed scheme would set an emissions target based on either 2000 or 1997 levels to be achieved by 2030 and would begin in 2010. “The proposed scheme is well designed and takes on lessons learned in the first years of the European Union Emissions Trading Scheme,” says Martijn Wilder, a partner specializing in climate change at Baker & Mackenzie law firm. “It is likely we will have national emissions trading in the next two to three years.”

This move comes as a direct challenge to the federal government, which maintains that any actions to put a price on carbon would deliver a massive blow to the coal-intensive Australian economy. At a Committee for Economic Development of Australia lunch in July 2006, Prime Minister Howard called the European Union Emissions Trading Scheme “a failure” and restated his resistance to emissions trading. Similarly, the Australian Chamber of Commerce and Industry issued a statement the day the NETS paper was released claiming the scheme would “send Australian jobs offshore, reduce the international competitiveness of our strongest industries and potentially lose some energy intensive industries to less developed economies.” Economic modelling conducted for the NETS Taskforce indicates an average increase of about AU$1-2 in weekly electricity bills and a maximum drop in GDP of 0.6% if the scheme is introduced. In addition, the International Energy Agency (IEA), an energy policy advisor to OECD country members, states that Australia’s electricity prices are among the lowest in the OECD. Most of Australia’s electricity comes from coal-fired power plants. Yet there is still some concern at the state level about the impacts of the NETS. In particular, Western Australia and Queensland are notably less enthusiastic about promoting the scheme. “The real issue for them is that the scheme does not disadvantage the energy-intensive, trade-exposed industries in their states,” Wilder says, “and this appears to be being addressed through the free allocation of permits.” The scheme proposes to allocate a proportion of allowances to energy generators and trade-exposed industries, such as aluminum smelting, for free to compensate for profit losses. More efficient businesses will be able to sell these to other parties, while others will have to surrender them to meet targets. In the case of trade-exposed industries, the allowances will be based on electricity consumption per unit of output, rather than total emissions, in hopes of avoiding the same stumbles the EU ETS had when countries realized they had over-allocated permits – and the price of allowances was cut in half in one day. For energy generators, a one-off payment to compensate for a reduction in the value of their assets has been proposed.

Brad Page, CEO of the Energy Supply Association of Australia, says that while his industry accepts that it will have to operate in a carbon-constrained future, the NETS does not fill the policy gap that will enable a smooth transition. “We’re facing a classic capital investment dilemma,” Page says regarding the challenges facing the association’s energy generation, transmission, distribution and retail members. “Companies invest in assets that will be in operation for 40 years or more. They can invest in coal, which is currently competitive in the wholesale market but exposed to a future constraint on carbon, or invest in lower emission technologies like combined cycle gas turbine,” which is in the opposite situation. Page says the NETS lacks the direction needed to make these billion-dollar investment decisions. The scheme’s proposal to set a firm cap for the first 10 years and then “gateways” (upper and lower bounds) for subsequent years is not sufficient, according to Page. “We need a concrete, long-term target, which we can then achieve through a suite of tools, not just emissions trading.” “The theory behind the gateways is that they will provide certainty 10 years into the future,” says Ashley Stafford, a senior associate at Baker & Mackenzie law firm. He suggests this is a reasonable timeframe for considering the payback period of investments, a more critical investment timeframe than the operational life of an energy plant. “We’re hearing from energy companies that will be directly regulated under the NETS that the scheme provides a better price signal than a lot of other options, particularly a carbon tax,” Stafford says, “and that’s what they’re looking for—some level of certainty.”

All emissions trading schemes become a catalyst for creating industry winners and losers in a carbon-constrained economy. Modelling conducted by The Allen Consulting Group identifies the renewable energy sector as having the highest percentage growth in output if the NETS is implemented, followed by the gas electricity and forestry sectors—the latter of which is identified as the primary sector to provide offset credits into the scheme. The coal—and hydro-based electricity sectors and electricity suppliers are expected to be most negatively impacted. Another win could come from Australia’s ability to attract new foreign investment. “An Australian CEO we work with says that when he tries to sell his products overseas, he’s always asked what he’s going to do about carbon exposures,” says Wilder. “So the business movement in Australia in the last six months has been toward implementing policies that supply certainty” on this issue. “Foreign investors have been horribly disappointed that the federal government hasn’t acted yet on emissions trading,” agrees Gary Keating, director of commercial services for Forests New South Wales. “It essentially limits the value of their assets.” Forests NSW is potentially a major winner if NETS is implemented, as credits can be generated for each tonne of carbon dioxide sequestered by its forests. The forestry company has already generated about 700,000 Greenhouse Gas Abatement Certificates under the NSW scheme, the only forestry-based carbon credits currently being traded in a regulated market. At a price of AU$12-13, regulated emissions trading has provided them with a lucrative business opportunity. “I don’t think a national scheme will revolutionize the world, and in general, what we have to offer can operate within the New South Wales scheme,” says Keating. “But we would like to see it get up, particularly if it can link to the EU system…as a way to get sequestration into the European market.”

The impacts of this scheme are small on a world stage: Under the most stringent target scenario, the scheme will reduce Australia’s emissions by about 115 million tonnes by 2030 compared to global emissions of 33 billion tonnes in 2000, according to the World Resources Institute’s Earthtrends report. Nonetheless, Australia is one of the largest per capita emitters of greenhouse gases. It has an economy based on coal-fired electricity and is enjoying strong economic growth by exporting coal to China. The country is also geographically removed from the hotbed of carbon trading activity centred in Europe. So if a country like Australia can get a national emissions scheme off the ground, the rest of the world may ask why other countries aren’t doing the same.

Marisa Meizlish is the manager of advisory services at New Forests Pty Limited in Sydney, Australia and regularly contributes to the Ecosystem Marketplace. She can be reached at mmeizlish@newforests.com.au. First published: October 18, 2006 Please see our Reprint Guidelines for details on republishing our articles.