The US EPA and Army Corps of Engineers managed to forge rare agreement among developers, environmentalists, and wetland bankers. Unfortunately, that agreement comes in the form of near-universal disparagement of revised wetland guidance intended to clarify the Supreme Court’s splintered decision regarding which United States waterways the Clean Water Act protects. 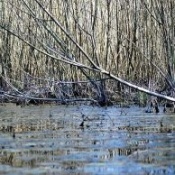 The US EPA and Army Corps of Engineers managed to forge rare agreement among developers, environmentalists, and wetland bankers. Unfortunately, that agreement comes in the form of near-universal disparagement of revised wetland guidance intended to clarify the Supreme Court’s splintered decision regarding which United States waterways the Clean Water Act protects.

11 December 2008 | “If the sign of a good compromise is that everybody leaves mad, upset and confused, I guess by that metric the revision is a big success,” said Neil Shader, spokesperson for the environmental group Ducks Unlimited, as he paged through the Bush Administration’s new guidelines on how to interpret Clean Water Act jurisdiction over wetlands, streams, and other waters.

How It All Began

Released on December 3, the document comes in response to a fractured Supreme Court decision from June, 2006.

That’s when the nine Supreme Court justices split four-four–one on a wetland dispute called Rapanos v. United States. Four of the justices issued a judgment whose interpretation would diminish the Clean Water Act’s protection of millions of acres of wetlands and streams. Four other justices ruled in favor of maintaining the Act’s purview. Meanwhile, the tie-breaking Justice Anthony Kennedy wrote a hairsplitting decision so oblique that enforcement agencies, developers, environmentalists and wetland bankers are still arguing over what he intended.

The decision left open to interpretation such basic operational words as “waters,” “navigable” and “adjacent.” And it threw into question just how stridently the Act should be enforced and what exactly should be protected, experts say.

As a result, land developers could not be certain which lands situated near wetlands and waterways were buildable, which lands would be protected, and which would require compensation through the purchase of wetland credits. Meanwhile, mitigation bankers (investors that purchase and sell shares in restored wetlands to developers in compensation for impacted wetlands) had difficulty predicting which available land would make an acceptable wetland bank site and which would be challenged. Moreover, the agencies charged with enforcing the Supreme Court decision, the EPA and US Army Corps of Engineers, needed new guidance to interpret the Supreme Court’s decision and make wetland determinations.

The confusion proved so extensive that an internal memorandum from EPA Assistant Administrator for Enforcement Granta Y. Nkayam dated March 4, 2008 and obtained by Ecosystem Marketplace, said it “negatively affected approximately 500 enforcement cases.” Agencies, the memo said, either declined to pursue enforcement or lowered its priority.

This marks the EPA’s and Army Corps’ second stab at clearing up the regulatory murk. The agencies issued guidelines a year after the Supreme Court’s Rapanos ruling to delineate which streams and wetlands were subject to federal jurisdiction. However, the agencies’ need to please three battling Supreme Court camps resulted in further ambiguities.

EPA Assistant Administrator Benjamin H. Grumbles acknowledged the initial guidance’ shortcomings when he released the guidance adding that the new revision would enable “the agencies to make clear, consistent, and predictable jurisdictional determinations within the scope of the Clean Water Act.”

What’s in the New Guidance?

The revised guidance released on December 3 made three primary changes to the June 2007 guidance. First, for wetlands and waterways to receive Clean Water Act protections, they now must have a relationship, or, in Judge Kennedy’s words, a “significant nexus,” to what the agencies call “traditionally navigable” and upstream waters. Prior to the new guidance, a looser standard allowed for a relationship with protected downstream waters and for waters that could be navigated by small recreational boats, said James Murphy, attorney for the National Wildlife Federation.

Second, the revised guidance attempts to clarify what the Supreme Court meant when it required wetlands and waterways to be “adjacent” to protected waters to receive their own federal protection. The new guidance says lands and waterways must be “reasonably close” to protected waterways. Not surprisingly, many say this new requirement, similar to the Supreme Court ruling and earlier guidance, appears ill defined.

And finally, the new guidance attempts to clarify the term “tributary flow,” another issue the Supreme Court introduced in the Rapanos determination. The revised guidance defines the term as “the flow regime that best characterizes the entire tributary.” Many complain, however, that using the same words in the definition as the words defined adds little to their understanding.

From Murphy’s perspective, the revised guidance “remarkably takes a confusing and unproductive document and makes it a little less productive and a little more confusing.”

The document’s obtuseness could impair the wetland banking industry. First, the revised guidance will introduce more cost and time to the permitting process, said Brandon Scarborough, spokesperson for environmental think tank Property and Environmental Research Center (PERC), based in Bozeman, Montana and “that alone could thwart development.” Less development would result in less demand for wetland compensation. Moreover, wetland bankers are left unsure about which wetlands they should restore and sell as wetland compensation.

Because of the confusion, the EPA and Army Corps now take twice as long to issue permits in states such as Florida, said Sheri Ford Lewin, president of the National Mitigation Banking Association and of the Florida-based consulting company Environmental Resource Marketing. That is bad news for mitigation banking since, said Lewin, “clearly the banking industry is driven by permits being issued.”
Clearing the fog

Some partisans complain about the Bush Administration’s release of revised guidance just a month before its term ends. But the timing will likely result in no additional constraint to the incoming Barack Obama administration, said James McElfish, senior attorney for the Environmental Law Institute in Washington, DC. Guidance does not have the same standing as regulations that would require laborious efforts to undue. Instead, he said the newly released document merely substitutes one guidance for another.

Bringing clarity to the Supreme Court’s mixed decision, he added, may be an unattainable goal for any regulatory agency. Instead, Congress must intervene legislatively. But so far, the divided Congress and lame duck president have made little progress.

However, Congressman Jim Oberstar (D-Minn.) has introduced legislation he said is designed to “restore the authority of the Clean Water Act so it has the same effect it had prior to the Supreme Court rulings.” Senator Russ Feingold (D-WI) introduced a companion bill in the Senate. President-elect Obama is said to support the bills.

“Fundamentally, the confusion created by the Supreme Court opinion will have to be worked out in some other way than issuing guidance,” McElfish said. To clear the fog, Congress must act.