A recent study done by a team of over 200 field biologists examined the many intricate parts of protected areas looking to find why some areas are more successful than others.  The study also includes methods and solutions to preserving species and ecosystems in the future. 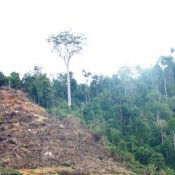 A recent study done by a team of over 200 field biologists examined the many intricate parts of protected areas looking to find why some areas are more successful than others.   The study also includes methods and possible solutions to preserving species and ecosystems in the future.

This article was originally published by The Conversation. Click here to read the original.

17 September 2012 |   You couldn’t have witnessed the recent massacre of elephants at Bouba N’Djida National Park and not be worried about the future of biodiversity.

The park, in northern Cameroon, is supposed to be a refuge for rare wildlife such as the African forest elephant and painted hunting dog. But earlier this year, armed poachers invaded the park and began slaughtering its elephants, hacking off their valuable ivory tusks, which are mostly smuggled to China. In the following months, over half of the parks’ elephant population — some 350 individuals — was gunned down.

Yet not all protected areas are suffering like this. In the Brazilian Amazon, where I’ve worked for many years, parks and nature reserves are helping to slow illegal deforestation, fires and logging in vulnerable frontier areas. Some parks are struggling, but many are holding their own in the face of growing environmental stresses.

Similarly, in northeastern India, my doctoral student Nandini Velho has found that parks are doing a much better job than surrounding community lands in sustaining rainforests and vulnerable wildlife such as tigers and Asian elephants.

What are we to conclude about parks and other protected areas? Will they be a cornerstone for sustaining biodiversity or a failed experiment, battered and overrun by a burgeoning human populace and its pressing needs for land and natural resources?

This question prompted me to initiate one of the largest studies ever attempted on protected areas and their biodiversity, focusing on tropical forests. Eventually involving more than 200 other field biologists, this study, just published in Nature, has crucial lessons for how we go about conserving our most imperiled species and ecosystems.

The good news is that, in the last two decades, many new protected areas have been established. Areas that are nominally strictly protected span nearly 7% of all tropical forests globally, and the figure approaches 13% if multiple-use reserves are included.

But are the parks working? Satellites give us a bird’s-eye perspective on major threats such as deforestation and wildfires inside parks. But they can’t penetrate down to the forest floor, to see individual monkeys and ants, lianas and orchids.

To really assess forest biodiversity — to see which species are thriving, struggling or vanishing — we need muddy-kneed field biologists.

Even if they’re studying, say, birds, field biologists often have a pretty good idea about what is happening to many other animal and plant species in the forest. They’re also keenly aware of threats to protected areas. In their forest wanderings they stumble over hidden snares, detect wafts of smoke from an approaching fire, hear the faint whine of a distant chainsaw.

To conduct our study my colleagues and I identified 60 protected areas, evenly scattered across the African, American and Asia-Pacific tropics. We then tracked down four to five recognized experts for each site — field biologists who’d typically spent decades studying that particular park — and had them complete a 10-page questionnaire and interview.

We found enormous variability in the biological health of different protected areas. Around half of the reserves seem to be doing okay. These reserves aren’t perfect — for instance, exotic weeds and disturbance-loving plants are increasing in many of them — but on balance they’re doing respectably.

The other half, however, are clearly suffering. They tend to undergo declines in top predators, their largest animal species, amphibians and reptiles, freshwater fish, epiphytes and old-growth trees. Many are also losing primates, species that require hollow tree-cavities for denning, and specialized birds.

Further, the suffering reserves are gaining invasive animals, exotic weeds and disturbance-loving trees and vines. Even human diseases are on the rise, possibly because disease-carrying mosquitoes favour disturbed environments.

Sweeping changes like this set off alarm bells. The affected species include plants with differing growth forms and life-history strategies and animals that vary greatly in body size, diet, foraging strategies, area needs, habitat use and other attributes. It’s like a person suffering from heart disease, emphysema, gout, shingles and dysentery all at once.

Why are the suffering reserves suffering?

One factor that jumps out is that reserves that have seen improvements over time in actual, on-the-ground protection fare better. Investments in park guards, infrastructure and vehicles have big benefits for reserves.

That’s not the whole story, however. We found that threats immediately outside reserves were nearly as important as those inside in determining their biological health. This surprised us at first, but then we recalled just how quickly the environments surrounding many tropical nature reserves are changing.

An example is Ducke Reserve, a 10,000-hectare park originally on the outskirts of the Amazonian city of Manaus, Brazil. As the city has grown, urban sprawl has swallowed the reserve like a giant amoeba. Instead of being embedded in forest, Ducke today is encircled by a hostile sea of houses, traffic, feral dogs and air and water pollution.

Our analyses reveal that 85% of the reserves we studied have lost at least some of their surrounding forest cover over the past 20-30 years, whereas just 2% have gained surrounding forest. Human populations have grown sharply near many protected areas, ratcheting up environmental pressures. In some places, farmers and loggers are marching right up to the borders of reserves.

This is bad news for parks. Isolated habitats tend to lose species whose small, fragmented populations are cut off from life-giving immigration and gene flow. Others, such as large-bodied animals and predators, are hunted or persecuted if they stray beyond the margins of reserves. The forests surrounding many protected areas are being rapidly cleared or degraded. Shown is recent deforestation for oil palm plantations along the edge of Bukit Palong National Park in Peninsular Malaysia.

Equally insidious is that the changes outside protected areas tend to penetrate inside them. For instance, a reserve encircled by logging, mining and poaching will also tend to suffer those same threats, to a lesser degree, inside the reserve itself. Protected areas are like mirrors; reflecting, to a degree, the health of their immediate surroundings.

What should be done?

It is this conspiracy of external and internal hazards that is most dangerous for biodiversity. If this were a boxing match, nature in suffering reserves isn’t just being stung by the occasional jab, but is reeling from a flurry of punches arriving all at once.

We need protected areas to be as big as possible, because bigger reserves are inherently more resistant to outside threats. We also need buffer zones around reserves, to help shield them from hostile surrounding land-uses. And we must stop reserves from becoming isolated wherever possible, by maintaining substantial reserve connectivity to other forested areas.

Finally, we need to promote less-damaging land uses near reserves by engaging and benefiting local communities.

If we want tropical protected areas to maintain their spectacular biological richness, we simply can’t ignore their burgeoning external threats.

Image courtesy of the author