Brazil aims to slash its greenhouse gas emissions 38% by 2020, with more than half of those reductions coming from an 80% reduction in Amazon deforestation. That makes REDD finance more important than ever – and bureaucratic deadlock more damaging. Amazon states say the whole process can be smoothed by splitting revenues and responsibilities 80/20 between the states and Brasilia. 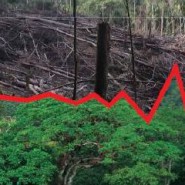 Brazil aims to slash its greenhouse gas emissions 38% by 2020, with more than half of those reductions coming from an 80% reduction in Amazon deforestation. That makes REDD finance more important than ever – and bureaucratic deadlock more damaging. Amazon states say the whole process can be smoothed by splitting revenues and responsibilities 80/20 between the states and Brasilia.

12 March 2014 | Before relapsing in 2013, Brazil had slashed deforestation rates six years running – an achievement that meant 3.5 billion fewer tons of carbon dioxide escaping into the atmosphere than would have happened if they’d continued on their previous pace. That’s roughly 1/3 of the total amount the country has promised to reduce by 2020, but its winning streak ended when deforestation rates surged 28% last year.

The country still, however, says its deforestation rate will be 80% lower in 2020 than its average rate was from 1996 through 2005. In fact, it’s counting on that reduction to deliver more than half of its promised 38% reduction in greenhouse gas emissions. To achieve such a dramatic reduction in deforestation, it plans to harness incentive payments for Reducing Emissions from Deforestation and forest Degradation (REDD).

But while individual Brazilian states have stepped up with concrete strategies for implementing REDD finance, the federal government has been slow to move – prompting the Governors’ Climate and Forests Task Force (GCF) last month to propose a REDD readiness strategy that would divide both revenues and responsibilities between the states and the federal government.

Outlined in a report entitled “Contributions to the National Strategy for Emissions Reduction from Deforestation and Forest Degradation (REDD+): A Proposal for Allocation Between States and the Union”, the proposal was developed by the finance ministries of Acre, Amapí¡, Amazonas, Mato Grosso, Parí¡ and Tocantins with technical support from Brazilian non-governmental organization IDESAM (Institute for the Conservation and Sustainable Development of Amazonas/Instituto de Conservaçí£o e Desenvolvimento Sustentavel do Amazonas).

“It is important to stress that the division of U-REDD+ to the states does not signify a ‘pass-through’ or use right to the state governments,” the report states. “It is understood as a fundamental premise that each state should establish a specific regulation (per example the states of Acre and Mato Grosso) that determines how REDD+ should be managed at the state level and how its potential benefits would be divided among all relevant stakeholders, such as traditional and indigenous populations, rural producers, municipalities, residents of conservation units, etc.”

Acre has created a unique System of Incentives for Environmental Services (SISA), while Mato Grosso created its own REDD+ System last year. The states of Rondí´nia, Amapí¡ and Amazonas are also in the process of developing their regulations through public consultations and needs assessments, among other activities.

The federal government has launched several initiatives to prepare for REDD, primarily the National Climate Change Policy (PNMC), the National Plan on Climate Change (NPCC) and the Plan for the Prevention and Control of Deforestation in the Legal Amazon (PP-CDAM). A National REDD+ System (SisREDD+) is ready to launch pending the approval of two legislative decrees, while a National REDD+ Strategy being developed under the Ministry of Environment (MMA) has bogged down in bureaucratic and political inertia.

The NPCC established the 38% emission-reduction target across all sectors, and expects more than half of that target – 55% –to come from halting deforestation. The Ministry of Science, Technology and Innovation, however, anticipates that emissions from energy, agriculture, manufacturing and waste management will increase over the same period – putting more pressure on REDD in particular and efforts to reduce deforestation in general.

The state proposal aims to spread U-REDD+ among all the Amazonian states, based on each state’s reference levels. It is not clear whether U-REDD+ will allow transactions through market-based mechanisms (offsets) or though funds and domestic investments. That will largely depend on how federal legislation regarding the treatment and recognition of offsets evolves.

For a full summary of the methodology of the stock and flux mechanism for allocation of U-REDD+ between states, download the full report.

This is the second in an ongoing series of articles developed in support of this year’s two Katoomba Meetings, both of which are taking place in Latin America. The first meeting will take place on March 19 and 20 at IguazÃƒÂº Falls, on the border of Brazil and Argentina, under the banner “Scaling Up Sustainable Commodity Supply Chains”.

The second meeting will take place in Lima, Peru, over four days –Ã‚Â  beginnng on Earth Day, April 22 through the 25th – and its working motto is “Climate, Forests, Water, and People: A Vision for Alignment in Tropical America“.

Part Nine Peruvian Ecosystem Services Law In Limbo On Eve Of Katoomba 20 In Lima examines a comprehensive piece of legislation awaiting debate before the Peruvian National Congress.
Ã‚Â
Part Ten Katoomba XX To Be Live-Streamed On Ecosystem Marketplace offers a late-stage guide to the Katoomba Meeting in Peru and how to access it.