The Brazilian state of Acre recently allotted 6.5 million Reais ($2.9 million) to indigenous ecosystem service programs under the state’s ground-breaking System of Incentives for Environmental Services. Here is a deep dive into SISA and its institutions. 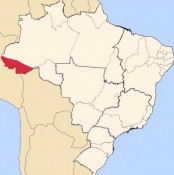 5 May 2014 | Located in the heart of the Amazon, Acre, Brazil contains just over 15 million hectares of land, most of which the state has managed to keep intact. However, its conservation efforts remain challenged by high economic reliance on agricultural, ranching and forestry/forest products and a comparatively small economy compared to other Brazilian states (the third smallest of 27 states). Acre is now on a mission to solve the problem through a comprehensive payments for environmental services program, starting with carbon finance.

The First Step is the Hardest

The state hasnt always embraced a sustainable development model. The movement took off under Chico Mendes, a Brazilian rubber tapper and environmental activist. In the 1980s, marginalized rubber tapper communities were losing land to timber companies and cattle ranchers. Mendes proposed the creation of extractive reserves to allow forest peoples to live sustainably. His assassination in 1988 sparked worldwide attention to the plight of the Amazons forest communities.

At the time of his death, Chico Mendes group was politically marginal. Extensive international and national coverage including an article in the New York Times propelled his fellow environmentalists out of obscurity and into the political arena.

Since then the group has gained recognition, as Mendes’ colleagues have gained substantial political positions. The most prominent is Marina Silva, who later become Brazil’s Minister of the Environment under the former President Lula da Silva and is currently a running-mate to a candidate in the upcoming presidential elections. Another member is Jorge Viana, who served as Acre’s governor from 1998 to 2007.

As the Environmental Defense Fund’s (EDF) Director of Tropical Forest Policy Steve Schwartzman vividly recalls, that marked a drastic turning point in the government. Prior to Viana, “The crowning symbol of the way the government worked in Acre was a canal in the city the maternity canal. It was basically an open sewer that ran through this scrub forest where people were dumping trash [despite official cleanup projects] It was the symbol of government corruption. His trip back to Acre after Vianas election was like returning to a different city; most importantly, the canal had been cleaned up and turned into a park.

Since then, the Workers Party has remained in power and has worked extensively to build an economy based on sustainable forest use in Acre. One of the first pieces of environmental legislation passed the Chico Mendes Law in 1999 marked the beginning of the governments dual emphasis on ecology and economy. It provides subsidies for traditional forest residents (such as rubber tappers and nut collectors) to receive payments for the biodiversity conservation and other ecosystem services provided by their work, while also seeking to add value to forest products through the creation of new markets. Since then, the government has helped build factories for sustainable natural rubber condoms, furniture, wood floors, and nut processing.

The Chico Mendes law illustrates the repeating focus since then: subsequent laws have similarly given equal weight to economic growth and the preservation of nature, like the aptly-named Economic and Ecological Zoning Plan (ZEE-AC). The ZEE, passed in 2007, laid the groundwork for Acres most wide-ranging program, the State System of Incentives for Environmental Services (SISA), by dividing all land into zones.

SISA passed in 2010 and was hailed by market experts as comprehensive and cutting-edge. Beto Borges of Forest Trends Communities and Markets Initiative concluded that Acre is, “The most advanced of all Amazonian states in Brazil to develop and implement PES policy a state with a proven track record of forest conservation and involvement of traditional communities.

After extensive consultations with stakeholders, the law also included the creation of the Institute of Climate Change and Environmental Services Regulation, the State Commission for Validation and Monitoring, a Company for the Development of Environmental Services (CDSA), a Scientific Committee and an Ombudsmans Office (see SISA Institutions, right).

SISAs Environmental Service Incentives for Carbon (ISA Carbon) is the furthest along of these programs; it has also gained high accolades from the Governors Climate Task Force, WWF and others as one of the most advanced subnational forest carbon programs in the world.

While this initiative encompasses Reducing Emissions from Deforestation and forest Degradation (REDD) projects, it also emphasizes maintaining current forest cover. For this reason, Acre maintains jurisdictional goals, so that the benefits from carbon can be rewarded to all participants maintaining or improving the forests.

These actions have been successful in establishing Acre as a leader in REDD both in Brazil and worldwide. Since inception, the state has been preferred for projects by forest carbon developers who have high praise not only for the legislative rules but also for the states willingness to work with them and for information transparency. “They are the best in the world when it comes to subnational jurisdictions working on REDD, comments the Carbon Funds Brian McFarland. In fact, REDD has been so successful in Acre that, according to a 2013 USAID report, it makes up about 65% of Brazils total supply of credits.

Seeing the Forest for the Economy

However, Schwartzman stresses that carbon is the first, but not only, consideration of SISA. “Carbon is one of the elements in a broader strategy. Long before people were talking about carbon credits, they [the Workers Party] were considering sustainable development… they’ve been thinking about a sustainable forest economy since Chico Mendes’ day.

This is the primary driver of Acres success, as well as the main challenge for any state seeking to replicate SISA. As Anthony Anderson, Senior Specialist in Forests and Climate at WWF-Brazil, explained during a presentation on Acre, the main challenge is that SISA is a program instead of a project. While a project has discreet goals, “a program is based in a wide state strategy¦ It must be based on public policies in many sectors, not only environmental policies, but mainly social and economic policies. One of the most successful policy instruments, he adds, is the zoning law that shapes Acres development policy.

Alberto Tavares, Director President of the Company for the Development of Environmental Services (CDSA) also highlighted Acres ZEE plan as essential to economic growth and SISAs success. Instead of relying on timber or other raw materials, he explained that the state must seek to diversify and add value to the current outputs.

One recent initiative is a fish farm, which was conceived as an alternative to producing animal protein through cattle farming. With initial startup support from the government, the site is now owned by two cooperatives. In addition to the fish farm, the government also supported the creation of a building for frying the fish; a modern feed mill to create fish-food; and a plant to process the resulting catch. The cooperatives allow small and medium farmers to buy fish and feed cheaply while having easy access to processing.

Similarly, in nut and rubber factories (which seek to add value to non-timber forest products), the government is also a partner to community-based cooperatives. “Acre is promoting and raising the money, and investing the factory, while at the same time bringing in the community to the business as a partner.  We believe that we, in the same time that we reduce deforestation, can increase GDP. And thats whats happened in the last ten years in Acre, explained Tavares.

Looking to the Future

The past years’ hard work has started to pay off. Between 2001-2010, the state had an above average GDP growth rate – 6% compared to Brazil’s 4.9%. Additionally, GDP has risen while deforestation has declined: Acre has maintained 88% forest cover even in the face of recent reversals in nearby Amazonian states. However, challenges remain – the largest being that, despite its progress, Acre remains one of Brazil’s smallest economies (with the state’s GDP per capita remaining below 60% of national average).

While the state has bolstered payments for ecosystem services schemes through strong political commitment and stakeholder engagement, the hoped-for private demand hasn’t materialized. This isn’t limited to Acre; lack of demand for carbon credits is a challenge faced by forest carbon projects globally. The state has begun exploring new financing mechanisms, but has not yet unveiled any concrete solutions.

In another way, the success poses a challenge in itself. “The canal is history, thats the new norm, explains Schwartzman.“The environmental markets have not developed at the rate necessary to base dynamic development policy on that.

Kelley Hamrick is a Research Assistant in Ecosystem Marketplace’s Carbon Program. She can be reached at [email protected]