Little guidance is provided on the complex issue of biodiversity offsetting and considering which impacts are offsetable. That is why a group of thought leaders from the biodiversity space have outlined an offsetability evaluation process that determines the success and appropriateness of specific offsets.  The process was recently presented in a webinar. 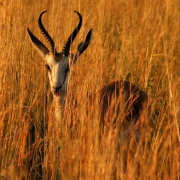 Little guidance is provided on the complex issue of biodiversity offsetting and considering which impacts are offsetable. That is why a group of thought leaders from the biodiversity space have outlined an offsetability evaluation process that determines the success and appropriateness of specific offsets. The process was recently presented in a webinar.

14 August 2013 | Biodiversity offsetting can be a tremendous tool for saving the habitat of endangered species, but they are not a panacea. Everyone agrees, for example, that you can’t offset an extinction.

But what about habitat of animals that are only vulnerable to extinction or ecosystems that are threatened but not destroyed?

Two of the paper’s 12 authors spoke during the webinar as well as Jeff Manuel from the South African National Biodiversity Institute (SANBI).

Limits to Biodiversity Offsets 18 July 2013 from Patrick Maguire on Vimeo.

While there is a general acknowledgement that there are limits on the types of impacts that should be offset, there is little policy guidance defining these limits. The process developed in the paper, says co-author and BBOP Science Coordinator Amrei von Hase, is designed to be globally applicable but locally tailored.

Because of the lack of guidance, the authors made a few assumptions regarding offsetting. First, they started with a clear no-net-loss definition to reference and a target of no net loss on a global scale. Second, they assume like-for-like offsetting where the offset is conserving the same type of biodiversity lost by a development project. Third, they consider the existence value, or recognizing biodiversity’s value just by knowing it exists, because the value of ecosystem services varies depending on region and people. Incorporating other types of values would have been complex and difficult to evaluate.

“In order to achieve the no-net-loss goals, decision makers will generally find it necessary to set up a limit to offsetability,” von Hase says.

The framework draws on existing ideas on environmental impacts assessments and offset approaches as well as conservation planning.

The six steps of the process were grouped into three sections. The first two are in a development area while step three is in the offset area and four is in implementation. The last two steps combine the former steps to evaluate if an impact is offsetable and create the burden of proof framework.

Biodiversity features were organized into categories ranging from vulnerable to irreplaceable. And the first step in the process is to organize the biodiversity of a potential project area into one of these categories. This step assesses the biodiversity conservation concern. Proper classification of species and ecosystems is needed, the authors say, and should be based on data from local conservation plans.

The second step, assessing the residual impact magnitude, is based on three elements-severity, duration and extent. As in an environmental impact assessment, severity measures the intensity of an impact and extent measures the proportion of a biodiversity feature that will be impacted. Duration weighs how long the expected impacts will last. Development projects that don’t cause considerable residual impacts on an area’s biodiversity do not require offsets.

Moving out of development and into the offset area, the third step assesses offset opportunity. Essentially this means having the availability of the right areas and actions to deliver suitable offsets, says von Hase.

“They are the practical opportunities for achieving biodiversity gains that are comparable, additional and lasting,” she says.

This step explores questions like whether there are offset opportunities in species and ecosystems’ natural areas and if the affected biodiversity plays key functional roles in the impacted ecosystem. These factors are external influences and developers have no control over them.

After offset opportunities have been assessed, developers can then appraise the feasibility of an offset. This is also the implementation phase of the process so developers have control over factors such as finance and timing and can improve the chances of an offset’s success. The capacity of the developer as well as the offset implementer matters here as well. The success of a project and offset depends on how well they design and implement it.

The fifth step combines the feasibility appraisal with offset opportunities and the residual impacts to create a number of classes that rank the likelihood of offset success. Success is measured by the no net loss target.

The sixth step is also part of the integration phase. It pulls together the conservation concern with the likelihood of success to form the burden of proof framework.

“The burden of proof framework is fundamental to the polluter pays and the precautionary principles which are well established in environmental law and decision making,” von Hase says. “It should really be a central consideration of development decisions.”

Using the two steps, the framework assesses the level of proof required for an offset. It should be applied during the design and implementation phase and will produce incentives to reduce residual impacts, according to von Hase.

Limits to Offsets in South Africa

Looking at the case in South Africa, SANBI’s Manuel explains that biodiversity is assessed using systematic biodiversity planning. Basically the planning works by using the available knowledge on biodiversity patterns and ecological processes to assess how much of the natural area needs to be maintained in order for it to function properly. The plan includes a scale that rates the status of ecosystems ranging from critically endangered to least threatened. A biodiversity target helps determine the level of an ecosystem.

The plan also helps decide if a biodiversity feature can be offset. The base assumption is development that causes negative residual impacts are unacceptable and not offsetable. This situation usually occurs in the critically endangered ecosystem category. Offsets are most likely to be needed when development occurs in the vulnerable and least threatened ecosystem groups. Manuel notes that it’s a common misconception that offsets aren’t needed when development occurs in least threatened areas.

The categories are broken down further with situations involving endangered species habitat and natural areas delivering ecosystem services. Ecosystems containing irreplaceable habitat and services-called critical biodiversity areas, or CBA 1- have no offsetability. But there are also CBA 2s and, depending on project design and conservation, those can be offsetable.

South Africa is a developing nation with high development potential and human need, Manuel says. This can affect how decisions are made regarding project approval. Regulators are reluctant to make controversial decisions and according to a 2010 survey, 98% of EIA applications are approved. But there is also a high success rate for appeals, Manuel says.

As conservation agencies, developers and regulators are the drivers of offsets in South Africa, Manuel sees problems and potential challenges with the current situation. One of those being underfunded conservation agencies start to view offsets as an income stream. Another, Manuel says, is the majority of impacts currently being offset are such serious threats to biodiversity that they shouldn’t be considered offsetable.

Manuel also note the process’ positive results. Developers have been forced to re-evaluate their projects after they found biodiversity impacts weren’t offsetable. And the limits to offsets have helped strengthen other mitigation steps.

“We will move in the direction where the limits are more consistently implemented and the exceptions are less,” says Manuel.

Manuel as well as von Hase noted that offsetability is one of several issues that need to be addressed when discussing biodiversity offsetting, but believe it can help assess risks and inform decision makers in various situations.

Kelli Barrett is a freelance writer and an editorial assistant at Ecosystem Marketplace. She can be reached at kbarrett@ecosystemmarketplace.com

This collaborative paper lays out a six step process developers should take to assess the likelihood and limit the risk of causing non-offsetable biodiversity impacts.

Step One: Assess Biodiversity Conservation Concern Discovering if already threatened species or ecosystems are at risk.

Step Six: Combine Biodiversity Conservation Concern and Likelihood of Success (steps 1 and 5) in a Burden of Proof Framework.