UN climate talks formally resume in Bangkok in April, and the one thing that we can all bet on is that strong support remains for mechanisms that reduce greenhouse gas emissions from deforestation and forest degradation (REDD).  Tony La Viña is the man who keeps REDD negotiators in line, and he recently co-authored this summary of negotiations to date. 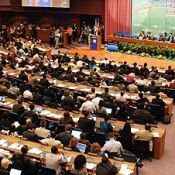 UN climate talks formally resume in Bangkok in April, and the one thing that we can all bet on is that strong support remains for mechanisms that reduce greenhouse gas emissions from deforestation and forest degradation (REDD).   Tony La Vií±a is the man who keeps REDD negotiators in line, and he recently co-authored this summary of negotiations to date.

Note: this article has been excerpted from The Cancun Agreements: Do they advance global cooperation on climate change?, which was published by the Field Foundation for International Environmental Law and Development.

10 March 2011 | Prior to and since UN climate talks in Copenhagen at the end of 2009, REDD-Plus had already matured to near consensus with a majority of the remaining contentious points being deferred to either the mitigation or the finance discussions. On the road to Cancun, discussions had not advanced significantly or provided limited progress in mitigation and finance, leaving the list of moot issues relatively the same: whether or not to explicitly recognize REDD-Plus as nationally-appropriate mitigation activities (NAMAs); to permit the use of subnational forest reference levels and monitoring systems under the scheme vis-a-vis safeguarding against leakage; how to monitor and report the implementation of safeguards; to refer to market mechanisms as a financing option for REDD-Plus activities.

Alongside technology transfer, there was a general sense by Parties that the finalization of a REDD-Plus mechanism could easily come out as an uncontentious outcome of Cancun, despite early calls of the United States to “reserve their right” to reassess their position on REDD-Plus pending progress on areas such as mitigation and MRV. With strategically a limited number of informal sessions being devoted on REDD-Plus in the Cancun Conference to allow for a concise exchange of views between Parties and the co-facilitators, a REDD-Plus decision was successfully included in the Cancun Agreements.

Much to the relief of several stakeholders involved in the process, the Cancun Agreements officially launched the REDD-Plus Mechanism under the UNFCCC and outlines, among others, the overall goal and scope of REDD-Plus activities to be incentivized by the mechanism—which, essentially, are those that reduce emissions from deforestation and forest degradation, promote sustainable forest management and the enhancement and conservation of existing forest carbon stocks.

The REDD-Plus decision, which is essentially a restatement of the agreements in Copenhagen, supports the safeguards as shown in Annex I of the Agreements, which, among others, refers to the United Nations Declaration on the Rights of Indigenous Peoples, the full and effective participation of relevant stakeholders, and the nonconversion of natural forests. In the same Annex, a strong feature of the “guidance” — earlier named as the “principles” — section is the emphasis on respect for national sovereignty and national circumstances, as well as the recognition that REDD-Plus should be supported by developed countries.

The decision also provides some initial guidance with regards to possible “readiness” activities developing countries could undertake in line with the phased approach of the scheme (WRI 2010).

On the issue of reference to REDD-Plus activities as NAMAs, this was struck out due to lack of consensus and for purposes of moving forward. On the issue of permitting use of subnational reference levels and subnational monitoring and reporting systems, these were accommodated in the final text provided they were only used as an interim measure and should eventually be integrated into a national REDD-Plus monitoring and reporting system so as to avoid the potential for leakage, and hence guarantee the integrity of the emission reductions.

On the use of markets to finance REDD-Plus — to which Bolivia is strongly opposed — the agreement instead requests the AWG-LCA to further explore, in the next year, financing options for the full implementation of results-based actions. As with other contentious areas in the negotiations, this delays a decision to 2011 on whether market mechanisms will be tapped as a source of REDD-Plus financing until South Africa, but effectively keeps the option to tap market mechanisms open for future consideration.

For the meanwhile, the agreement mentions existing bilateral and multilateral mechanisms shall be the source for REDD-Plus financing.

Finally, in Annex II of the Cancun Agreements, a request is submitted to the Subsidiary Body for Scientific and Technological Advice (SBSTA) to identify LULUCF activities in developing countries related to the drivers of deforestation and forest degradation, identify possible methodological issues in estimating related emission and removals, to assess their potential contribution to climate change mitigation, and report its findings to the Conference of the Parties in 2012.

A request is also submitted for the SBSTA to develop modalities in MRV-ing REDD-Plus activities as well as in providing information on how safeguards are addressed, for consideration in South Africa in December 2011.

Analyzing the REDD-Plus agreement as a whole through its subtle transformations as a draft of 30-plus pages back in 2009, there is no denying that what we have as an official decision is a compromise text. However, we feel nonetheless Parties’ views are well-reflected and that the text respects the outcomes of the very hard negotiations undertaken in the last 2-3 years. Indeed, an official REDD-Plus mechanism is something to be celebrated as the international community can now begin the overdue process of patching up the several national REDD-Plus strategies and REDD-readiness projects, already operational around the world, under one official REDD-Plus framework under the UNFCCC.

The pressing challenge facing the immediate future on REDD-Plus therefore includes ensuring resources flow towards building capacity in developing countries to implement REDD-Plus properly as per the phased approach, while respecting the safeguards. It is important to note that, among others, the Eliasch Review (2008) estimates the cost of halving emissions from the forestry sector by 2030 at $17-33 billion annually. This scale of financing must somehow be made available through a combination of fast-start and innovative financing as soon as possible to capitalize on the political momentum and the mitigation opportunity brought about by a REDD-Plus decision.

This is also why the SBSTA discussion on the development of modalities for both the MRV of REDD-Plus activities and the provision of information on safeguards are critical as they will have a direct bearing on funding and investment flows into REDD-Plus projects, in that these modalities will determine heavily the integrity of national REDD-Plus strategies and performance. However, we do anticipate a very challenging discussion in the SBSTA on how modalities will be developed for estimating LULUCF-related emissions and removals appropriate for developing nations, in particular, the possible implications of appropriately translating existing LULUCF rules for developed countries under the Kyoto Protocol to developing nations for REDD-Plus, or creating new ones altogether.

More than ever with an official REDD-Plus mechanism in place, we foresee an explosion of discussion, research, and piloting towards how developing country Parties shall go about establishing forest reference levels and national monitoring systems as per the “request” of the official REDD-Plus text. And while modalities have not officially been decided by the SBSTA, we already see the ascendance of the IPCC Good Practice Guidance on LULUCF and ever-evolving climate and forest carbon standards (eg. Voluntary Carbon Standard and the Climate, Community and Biodiversity Standard) taking center stage towards informing how subnational and later national REDD-Plus programs, including methods on establishing forest reference levels, should be undertaken while ensuring safeguards are respected at every stage of implementation. This particular arena shall continue to drive lively discussion on REDD-Plus well into the next few years despite the perceived closure of the REDD-Plus discussion under the UNFCCC, also determining to a significant extent capacity building and financing needs for REDD-Plus across its phases.

Finally, revisiting the fate but, more importantly, the lessons learned from the Interim REDD-Plus Partnership is also necessary. There needs to be a smooth turnover of the existing coordinative infrastructure of the Partnership into the broader UNFCCC REDD-Plus mechanism, taking great care in ensuring that the work programme already in place for 2011-2012 in the Partnership is enhanced under the official mechanism and expanded to accommodate a broader array of bilateral and multilateral financial sources and readiness activities as signaled by the REDD-Plus decision.