While the Trump is dominating American media, a group of 25 Republican and 25 Democratic members of the US House of Representatives have quietly joined the Climate Solutions Caucus, which aims to forge climate solutions that work across ideological divides. 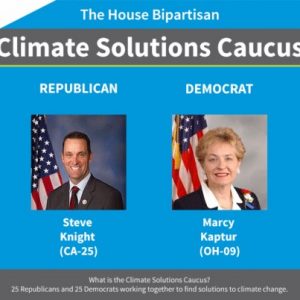 29 July 2017 | The bipartisan Climate Solutions Caucus in the House of Representatives now boasts 50 members. That’s 25 Republicans and 25 Democrats who have set aside partisan scuffles in order to combat climate change together. Rep. Steve Knight (R-CA) and Rep. Marcy Kaptur (D-OH) are the latest pair to join the caucus and bring its membership to this important milestone.

“We’re thrilled to see so many members of Congress eager to discuss effective climate solutions. This group includes more than 10 percent of the House,” said Mark Reynolds, the executive director of Citizens’ Climate Lobby. “It really speaks to the best of what our democracy can be: representatives working across the aisle to meet a challenge that affects all of us.”

The Climate Solutions Caucus was formed in February of 2016 by Rep. Carlos Curbelo (R-FL) and Rep. Ted Deutch (D-FL), both concerned about sea level rise affecting their districts’ economies and their constituents’ way of life. Membership has exploded this year, with the caucus tripling its ranks since January. Together, these 50 representatives have heard the outcry from their constituents that climate change is a priority, and they’re ready to take action.

In a press release Tuesday, Curbelo said, “Now 50 Members strong, the Climate Solutions Caucus is evidence that there is a growing, diverse, and bipartisan coalition of Members of Congress ready to put petty politics aside and find meaningful solutions to the challenges posed by sea level rise and climate change. We have a responsibility to our constituents and future generations to present a united front to combat anti-climate policies and to have a productive, fact-based dialogue about market-oriented solutions, investments, and innovations that could mitigate the effects of climate change and make our nation more resilient. I’m thankful to these new Members for joining our efforts. Together we are showing the American people that Members of Congress can work across party lines to improve quality of life in our communities and strengthen our great nation.”

Earlier this month, the caucus made its presence known during a vote on the Defense authorization bill. Rep. Scott Perry (R-PA) introduced an amendment to the bill to strike all climate change language, including a requirement for the military to assess the national security risks of climate change. Nearly all the Republicans on the caucus voted against Perry’s amendment. They were joined by 24 other Republicans, and the amendment was easily defeated.

“At a time when the Trump Administration has turned its back on the Paris Agreement and partisanship plagues Washington, a bipartisan effort of this size shows the tide is turning on the climate issue,” said CCL’s Reynolds. “It’s only a matter of time before the efforts of these 50 representatives results in meaningful legislation to combat climate change.”

Steve Valk is Communications Director for Citizens’ Climate Lobby. Steve joined the CCL staff in 2009 after a 30-year career with the Atlanta Journal-Constitution.