After years of negotiations, the global climate community has aligned behind efforts to protect and restore forests, which has enormous potential for fighting climate change. Here, Jason Funk of the Center for Carbon Removal explains how 2016, while not a year of high-profile decision-making, may still be a year for the history books. 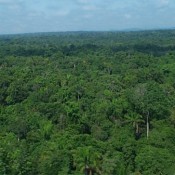 Originally posted on the Center for Carbon Removal blog.

27 December 2016 | Future historians may look back at 2016 as a year that marked a significant shift in the land sector, leading to the acceleration of carbon sequestration around the world. It confirmed and widened the opportunities for countries to sequester carbon through better management of forests, croplands, pastures, and wetlands, while adding to the urgency of this opportunity as a key element of our efforts to prevent disruptive climate change. Fortunately, many countries have begun to take action at a large scale, and others are learning from their examples. At the same time, new resources to spur sequestration are being mobilized at an unprecedented scale. Although the year might be characterized as one of preparation and cultivation, rather than tangible, high-profile outcomes, the seeds of 2016 promise to bear significant fruit in the years ahead.

After years of negotiations, the global climate community has aligned behind efforts to protect and restore forests, which have enormous potential to remove carbon from the atmosphere. Building on initiatives like the Bonn Challenge, the Warsaw Framework for REDD+, and the New York Declaration on Forests, 2015 concluded with worldwide consensus in the Paris Agreement that “Parties [to the Agreement] should take action to conserve and enhance, as appropriate, sinks and reservoirs of greenhouse gases,” including “biomass, forests and oceans as well as other terrestrial, coastal and marine ecosystems.” In 2016, we saw many countries begin to act on this commitment, individually and collectively, with a proliferation of new plans and policies, fueled by growing investments and practical science. More than 120 countries included forests in their commitments, with activities ranging from afforestation in Afghanistan to sustainable forest management in Zambia.

Many countries were already taking action toward reducing emissions from deforestation and enhancing forest carbon sinks, and 2016 gave them an opportunity to secure the gains they had made. For example, Brazil, Colombia, Ecuador, and Malaysia have each built a solid foundation for action in forests, by 1) developing monitoring systems that can track fluctuations in emissions from forests, 2) initiating processes for consultation with stakeholders, and 3) establishing official baselines for tracking progress, which have been reviewed by international experts. In 2016, we saw further progress, with nearly a dozen countries submitting forest baselines for formal review – as well as development of recommendations for how to make this process more accessible and streamlined, generated by an expert dialogue in which I played a role as a facilitator and co-author. These baselines and the associated accounting systems, used to track progress, are crucial early steps that set the stage for forest countries to secure financial support and implement policies that can build up forest carbon.

A number of countries stepped forward to support such efforts, often using dedicated multilateral funds designed specifically for this purpose. For instance, 14 countries, plus the European Commission and two independent organizations, have committed $1.1 billion to the Forest Carbon Partnership Facility, which in turn has leveraged at least one dollar of additional investment for every dollar it has allocated to the 19 countries in its pipeline of large-scale forest programs. Contributions like these will be directed toward the priorities set by countries in their own commitments, including forests and agriculture.

Agriculture is poised for transformative changes

Turning to agriculture, we saw nearly 120 countries pledge to address emissions from agriculture, often through measures that can pull carbon from the atmosphere and store it in soils. Scientific and technical breakthroughs will need to play a key role to make these pledges a reality. Toward that end, in 2016 the Global Research Alliance on Agricultural Greenhouse Gases continued its work, bringing together researchers and experts from dozens of countries to assemble collaborative research projects and develop best management practices in agriculture, including cropland and soil carbon management. Their work draws upon active research on the practices that can simultaneously sequester carbon, raise yields, and enhance agricultural resilience – some of which is occurring at the 15 research centers of the CGIAR network, through the Global Alliance on Climate-Smart Agriculture, and at dozens of academic institutions around the world.  Such work will be increasingly necessary to sustain the most vulnerable in a world with rising human populations and ongoing impacts of climate change.

Even with these critical inroads, progress will be difficult in agriculture, especially as climate impacts and rising incomes add to the existing pressure to increase productivity. Historically, increases in agricultural productivity have typically been associated with rising emissions and the depletion of soil carbon. However, many farmers in a range of contexts have bucked this trend, finding ways to improve the health of their soils and reduce their use of high-emissions inputs, while gradually improving their livelihoods. This body of practices and techniques is now being recognized as a distinct approach to farming, sometimes labeled “carbon farming,” and its champions are cataloging its characteristics and successes. The widespread adoption of this approach will require — among other things — demonstrating its advantages to millions of smallholder farmers and creating transition pathways from current practices to more climate-friendly ones.

2016 was a springboard for the land sector

The year 2016 marked the beginning of a new era for climate and land-use issues. This change has not happened overnight, but has been the result of long-term, dedicated efforts by land managers, researchers, investors, policymakers, and others. Its effects may not be fully realized for some time (or may be interrupted), but the signs point to a significant shift: the incorporation of forest and soil restoration into the climate and development strategies of most countries, the enshrinement of the land sector’s key role in the international climate agreement, the first fruits of coordinated research efforts aimed at integrating climate goals into land management, and the availability of large-scale financial investments to fuel the climate-related benefits of better land management. Each of these factors blossomed in 2016 and in combination, they comprise an unprecedented opportunity for transformative progress. Here at the Center, we plan to add our own efforts to building a new, sustainable paradigm for the land sector – a paradigm that turns carbon into a resource for feeding the world and restoring our precious landscapes.

Jason Funk is Associate Director, Land Use at the Center for Carbon Removal.