The people of Saltillo, Mexico, voluntarily pay to support the watershed of the surrounding mountains – and with it, their own drinking water. Ecoystem Marketplace examines this innovative Payments for Watershed Services (PWS) scheme. Third in a series leading up to the 14th Katoomba Meeting in Mato Grasso, Brazil. 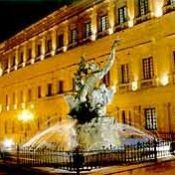 The people of Saltillo, Mexico, voluntarily pay to support the watershed of the surrounding mountains – and with it, their own drinking water. Ecoystem Marketplace examines this innovative Payments for Watershed Services (PWS) scheme.

Third in a series leading up to the 14th Katoomba Meeting in Mato Grasso, Brazil.

5 February 2009 | Mexico’s Sierra de Zapalinam has been good to the people of Saltillo, capital of the Mexican state of Coahuila.

The Sierra’s mountain streams, for example, provide clean water for more than 70% of the nearly 700,000 saltillenses – as well as for residents of neighboring Arteaga and Ramos Arizpe; and the entire Sierra supports habitat for endangered species like the puma (Felis concolor), the American black bear (Ursus americanus) and the maroon fronted parrot (Rhynchopsitta terrisi).

In 1997, it was declared a nature reserve, but as more and more people move into the mountains – and farmers work the land more aggressively – the natural catchments that regulate and filter the water are less and less able to do so.

“Five or six years ago, the city of Saltillo suffered a serious drought,” says Leticia Rufino Jimnez of local non-governmental organization (NGO) Profauna (Protection of the Mexican Fauna). “Nowadays, that problem isn’t as drastic, due to the actions that were implemented to protect the watersheds”.

The scheme lets the people of Saltillo pay landowners in the Reserve for acting as guardians of the watershed.

The project faced its first challenge when promoters realized that few saltillenses knew that their water came from the surrounding mountains – and thus had no incentive (other than philanthropy) to pay for supporting the natural bounty on which they depend.

Profauna responded with an awareness campaign dubbed Por una raz³n de peso (a reason of one peso), which aimed to help the city dwellers recognize the vital importance of the Sierra as the catchment area for the water consumed by the city – as well as the recreational and educational services the Sierra provides.

The payment mechanism was established in 2003 under a collaborative framework between Profauna, the city of Saltillo, and the local water utility, Aguas de Saltillo (AgSal).

AgSal customers see the term “social contribution” on their water bill and can choose to participate in amounts ranging from one to 1,000 pesos (US$0.06 to$67.00).

To prevent “buyers’ remorse”, they are asked to fill out a written form authorizing AgSal to deduct the selected amount each month, while Profauna is in charge of collecting the forms and subsequently sending them to AgSal.

“It is complicated to join the program, because a lot of information needs to be collected,” says Marines. “But you only need to make one single call to AgSal to unsubscribe, and this generates confidence among users.”

So far, he adds, few have left the program.

Once AgSal collects the contributions, the money is channeled to an account managed by the Grupo Ciudadano de Apoyo (Citizen Support Group), which is comprised of representatives from institutions such as WWF and FMCN, as well as respected local citizens who guarantee transparency.

“Involving distinguished citizens in the resource-allocation process has been an achievement that has promoted transparency and security to the stakeholders,” says Marines.

The projects themselves are submitted by landowners in the watershed and vetted by a group of experts called Grupo Tecnico de Apoyo (Technical Support Group), which is comprised of representatives from SEMARNAT (Natural Resources Secretariat), INIFIAP (National Institute for forestry, agricultural and livestock research), CONAFOR (Mexican Forestry Commission), CONAGUA (National Water Commission), and FMCN, among others.

Grupo Tecnico de Apoyo filters projects based on technical feasibility, and the Grupo Ciudadano de Apoyo decides which will be funded.

Getting People on Board

To date, only 14% of water users (28,000 from a total of 200,000 users connected to the utility supply system) contribute to the scheme, and at small levels, but Sergio Marines, Coordinator of Profauna’s office in Saltillo, points out that the 2003 round drew only 4,000 donors.

In 2006, the state of Coahuila upped its support of the program with a peso por peso (peso by peso) matching arrangement. In addition to his personal contribution, the Coahuila Governor Humberto Moreira committed to double the resources for the project, channeling a monthly sum equivalent to the amount raised in July 2006, adjusting the amount each year.

“If Saltillo is full of life, if there’s water in every house, if we are able to live in this place – it is because of the Sierra de Zapalinam,” said Moreira when the peso por peso was launched. “If it doesn’t capture water, the Sierra dies, and as a consequence, there will be no water in Saltillo.”

The projects involve local communities and small land-holders who present proposals in line with the Reserve’s Management Plan. Marines points out that funds aren’t paid out just for keeping hands off of the forests, but for actively developing conservation and restoration projects in the Sierra.

“The most visible environmental benefit is the increase in vegetation cover in the Sierra,” he says. “Communities are working to convert agricultural to forest land, and changes can be observed both in the forest structure and dimension. Areas that used to be crop fields are now covered by forest as a direct result of the program.”

Long-term, the program’s success will be defined by its impact on both the environment and the communities of the watershed.

“Perception and attitude is changing within local communities – especially in winning support for the Natural Protected Area (NPA) decree to working in conjunction with NPA authorities in conservation activities,” says Marines. “This was possible thanks to the Cities and Watersheds project”.

Currently, a project for monitoring the springs in the upper basin of Zapalinm is being implemented and carried out every two months in collaboration with NPA personnel to evaluate water quality and quantity flows.

Marines says that a voluntary scheme has many virtues over a compliance scheme – largely because it encourages active participation by people both in the city and in the Reserve. Indeed, more than 15,000 families of the watershed are already involved in projects related to the scheme.

“In the first place, it is a way to gauge the level of the project’s acceptance,” he says. “Having the voluntary support of 15,000 families in a community is quite interesting from a political perspective as well, but if done under a compulsory scheme, these virtues would be gone.”

Rufino, who is now Profauna’s project manager for Watershed and Cities II, agrees.

“The fact that the scheme was not imposed helped increase people’s support for the cause and their environmental awareness,” she says. “In the end, it’s not only money that matters.”

“I’ve witnessed some experiences in Veracruz and Jalisco, and the secret is to adapt to local ideology,” says Marines. “The experience we’ve had in Zapalinam, might be replicable, but with proper adaptation”

In a national context in which PWS experience in Mexico is mainly within the federal PWS program, the results and experiences drawn in Saltillo constitute an undeniable reference for building the road ahead.

Claudia Lechuga is editor of Mercados Ambientales.com (Spanish website of Ecosystem Marketplace that was re-launched as Valorando Naturaleza in 2013.) and Climate Change Coordinator in Reforestamos Mexico. You can reach her at claudialepe@gmail.com or clechuga@reforestamosmexico.org.

Water Trading: the Basics
Part One: A Brief Tour of Brazilian Payments for Ecosystem Services
Part Two: Picking up the REDD Tab