The new book Dry Spring: The Coming Water Crisis of North America, is an environmental cautionary tale with a hopeful ending delivered courtesy of ecosystem markets. Here, author Chris Wood shares with the Ecosystem Marketplace his vision of a world in which that hopeful ending is realized. 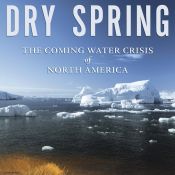 The new book Dry Spring: The Coming Water Crisis of North America, is an environmental cautionary tale with a hopeful ending delivered courtesy of ecosystem markets. Here, author Chris Wood shares with the Ecosystem Marketplace his vision of a world in which that hopeful ending is realized.

6 July 2008 | A new regime of eco-payments in our economy means that my grandchildren pay less for products that contain less accumulated environmental impact. Industry pays for the ecosystem services its processes require, embedding those costs in the price of products (motivating the most successful businesses to work ceaselessly to reduce them).

As a result, spending patterns have changed. Buyers are drawn to features of design and durability that will keep them happy with their purchases for years. Throwaway “consumer” goods have almost vanished from shelves, priced out of the market by eco-charges.

The higher price of the manufactured things that most people use only occasionally, such as power tools or vacation equipment, lies behind the current explosion of rental centers.

We’re seeing more social consuming: participation in popular group activities like dinner or hiking clubs that, for many, have replaced recreational shopping.

A Boom in Ecosystem Services

A city now includes the costs of the eco-services its citizens consume in any of a variety of public charges, from the nearly ubiquitous city-centre congestion fees, to water bills, property taxes and development permit fees. Tenants see the same charges on the individually metered utility bills that are mandatory now in most communities.

The money from these levies, together with industrial eco-payments, flows to accredited eco-service providers, either locally or through the global eco-markets launched in the ’20s in New York, London and other financial centers.

It supports a burgeoning new economic sector. Wild-land management consortia, ecosystem “bio-neering” firms and habitat construction companies are booming. In urban areas, employment in restoring and recreating ecosystems has more than offset the jobs lost in the retreat of big-box retailing. The number of cars on the road has plummeted, and many of the new green spaces occupy acreage once devoted to parking lots.

The few old-school environmentalists of my own age claim vindication that the environment is at last being properly valued. But they grieve (along with younger techno-Edeners) the ongoing cascade of extinctions, as scores of species lose their last fragments of habitat.

The public mourning for these has produced contradictory responses. With each species that is extinguished, some people find less reason to go out of their way to save the next.

In the same way, Asian carp and other species once scorned as invasive “aliens” are being rehabilitated in public opinion these days as climate-change survivors. Non-profit stewardship groups and public environment agencies pay a premium for ecosystems that provide migration corridors for endangered species.

Air travel has become pricy, but those who do fly into North American cities no longer look down on industrial deserts of asphalt, concrete and tar-and-gravel roofing. Instead, they see kilometres of patchwork meadow: “green” roofs, planted with local grasses and shrubs. These reduce owners’ heating and cooling costs and lessen flash runoff from rain.

Some large factories have even turned their roofs into revenue opportunities, leasing them out to farmers for cultivation or qualifying for eco-payment credits. You can see cows grazing or grapes ripening above sprawling industrial complexes.

Other businesses are locating where plumbing connections to “upstream” industries let them take advantage of lower-cost “used” water. Some have cut their ties to municipal mains entirely and provide their staff with premium bottled water for refreshment.

Stream-bed erosion and pollution from street runoff have been dramatically
curtailed in most urban areas, despite increasingly heavy rain, without the need either to expand storm drains or to add municipal waste treatment plants. Those are now more often known as “recovery” facilities.

Sanitary wastes are turned into saleable wash-down water with a residual byproduct of compost material. That, in turn, finds a ready market in the mitigation industry, where it is used to rehabilitate retired parking lots and other degraded landscapes into viable wetlands, meadows, savannahs and growing forests.

Thanks to these changes in streetscaping, building design, and home and
commercial water use, no North American city has had to condemn a valley for new dammed storage in over a decade. The expanding reuse of water for landscaping and commercial purposes has allowed existing treatment plants in most cities to serve growing populations with ease.

The future is no surer than it ever was. But we have arrived at the year 2035 with our human civilization intact. And our continent’s economy today is more responsive to its impact on the environment than it has been at any time since before the Industrial Revolution.

Not only did we get the water part right but, in doing so, we ended the estrangement of our species from nature. Let’s celebrate 2034 as the first year in many when we used less of Gaia’s bounty than our share of the planetary ecosystem produced. Our environmental account has returned, after many decades, to the black — or perhaps we should say, to the green. Our part of the planet can claim, cautiously, to be mending.

Adapted from the epilogue to Dry Spring: The Coming Water Crisis of North America, published jointly by Publishers Group West (Canada) and Raincoast Books (USA), and available at Amazon.com.

Canadian journalist and author Chris Wood can be reached through his web site, www.bychriswood.com.