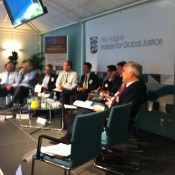 22 March 2013 | THE HAGUE | Netherlands | “Government can only do two things,” said Anthony Turton, a trustee with the Water Stewardship Council of Southern Africa, at the Fifth Regional Consultation on Groundwater Governance here yesterday. “It can regulate, and it can incentivize. It has a stick and a carrot.”

The private sector, he added, has everything else.

“They have the capital, the technology, and the capacity to be either good or bad,” he said. “So the question is: how do you regulate and incentivize them to become good rather than bad?”

The consensus answer, according to participants from beverage makers like Nestlé and mining companies like Mintails Ltd, begins with clear rules uniformly enforced. Heineken water specialist Ron Bohlmeijer even said that governments needed to be stingier in granting licenses to operate.

“We want to be good actors, but it’s hard when others aren’t,” he said. “Only government can provide licenses to operate.”

Panelists consistently said that the greatest challenge to doing business in the developing world was the lack of oversight, which led to a lack of predictability and a lack of trust in the resource on which they depended.

“In Europe, regulations are tight and companies may feel that’s uncomfortable but at least it’s certain,” said Peter Newborne, an independent research associate with the Overseas Development Institute. “Companies in the developing world are facing difficult situations where a resource or aquifer has been depleted and they wish the government would take the lead, but the government is not doing so.”

Other panelists echoed that sentiment, and re-stated the positive effects of proper regulation.

“The relationship differs by region and country,” said Svetlana Obradovic, a hydrogeologist at Schlumberger Water Services. “In the Netherlands, our major clients want policies and water boards because they have a healthy relationship of trust with the government. That’s not always the case.”

Ultimately, they said, good regulation fostered and built on a feeling of trust – which is more often lacking than present.

And, even in countries that get high marks for good governance, private-sector actors say long-term signals need to be stronger.

Andrew Cameron, the Environment Manager for Shell Global Solutions, agrees, and adds that the private-sector does best when it has a clear goal.

Several participants said that they had taken concrete steps on their own to mitigate risk.

Ronan Le Fanic, the Corporate Water Resources Manager at Nestlé Waters, highlighted the payment for watershed services program that his company initiated nearly 20 years ago at its Vittel bottling plant, and said the company recently helped 35 farmers mutualize their farms areas to build a biodiversity area, which automatically qualifies for funding by Swiss authorities.

Heineken’s Bohlmeikjer outlined a strategy his company adopted after beginning to expand abroad in the last decade.

“We have determined that 22 of our sites are situated in water scarce river basins and where there is potential to disrupt our business and our supply chain operations,” he said. “Our response is a dedicated water stewardship strategy that involves water efficiency internally and also engagement externally.”

On the efficiency, front, he says the company wants to reduce the volume of water required to produce one liter of beer by 25% in the next seven years. Externally, the company has initiated a compensation program in water-scarce areas, where they provide compensation for the water that isn’t returned through the water cycle.

“We want to compensate for the water with the community or ecological projects,” he said. “We have an objective to increase water retention in the watershed or stimulate biodiversity.”

He reiterated, however, that larger cooperation is necessary to save an entire watershed.

“Water in a watershed is shared resource, so water risks are shared, and solutions for water problems can never be achieved by a single stakeholder, so water scarcity issues need to be addressed by collaborative action,” he said. “We need cooperation among water suppliers, regulators, NGOs and businesses.”

Many companies said they were willing to step in when government failed, but there was also a fear of going too far.

“The conundrum is when companies feel they have to become water resource managers when in fact, they are a brewery,” said Newborne – warning that when companies take too much responsibility, they pose a risk not only to themselves but to small farmers who may wake up one day to find the benevolent watershed protector has been taken over by a not-so-friendly concern.

“It’s a genuine problem for companies and what they do when they go out in the catchment,” he says. “I suppose they don’t want to bully people – they want a discussion – but are they going to convene a stakeholder group? Surely not. That’s the job of government. The role of water allocation between competing demands is the role of government.”

If government isn’t doing its job, he says industry can use its power to lobby for good governance – but should not be filling the role itself.

“Companies have to lobby, push, cajole, and incentivize the government to do its job,” he said.

“I understand the case of Vittel, because…you had such an alignment of the business interest with the catchment management,” he said. “But for companies where there isn’t that obvious match of business and general interest or surrounding interest, it’s more naughty isn’t it?”