Five years ago, Denver teamed up with the US Forest Service to funnel money it collects from water fees into forest restoration that will protect the city’s water supply. Ecosystem Marketplace covered the program’s launch in 2010 and checked back in for World Water Day to find the partnership is making significant progress treating more forestland at a lower than expected cost 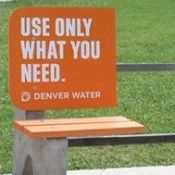 21 March 2014 | The Colorado utility Denver Water delivers clean drinking water to 1.3 million people spread across more than 335 square miles, and most of that water comes from rivers and reservoirs that capture run-off from forest-covered hills in clearly-delineated watersheds. The forests both protect the steep slopes from erosion and regulate the flows of water by mopping it up and then releasing it slowly over time.

But climate change has extended summers in Colorado just enough to give the northern pine beetle the comfort it needs to multiply like never before. The bug has taken full advantage – devouring bark at a rate ten times higher than ever recorded, killing trees and leaving them scattered like kindling for wildfires.

And those fires now take hold with increasing frequency, reducing the forest to lumps of silt and sludge. Lush slopes degenerate into unstable masses of goo. The water upon which the city depends becomes muddy and irregular, which makes it more difficult – and expensive – to assure people they can turn on their faucets and trust the drinking water that comes out.

Enter the US Forest Service (USFS), which is charged, in part, with ensuring clean headwaters by maintaining healthy forests.

Both the USFS and Denver Water are struggling to meet their budgets in the face of these challenges, so in August of 2010 the Forest Service’s Rocky Mountain office cut a $33 million deal with the Denver utility to proactively manage 38,000 critical acres in five key watersheds – if Denver Water comes up with half the money.

Denver Water took the offer, despite – or perhaps because of – its own struggles with a slew of disaster-related expenses, including a $26 million bill to remove silt and mud from a reservoir in just one wildfire-damaged watershed.

Convinced that spending money now will save money in the long run, the utility agreed to finance the removal of dead trees in sensitive areas among other activities that will halt the beetle’s massive tree-eating ventures by implementing water fees that will amount to about $27 dollars per household over the next five years.

Five years on, the project is operating under budget, and it’s expanded in both scope and ambition, says program manager Don Kennedy.

The initial objective of 38,000 acres has since risen to 46,000, but the program only spent $14.5 million – versus the allocated $16.5 million – on the necessary fuel treatments (mechanical underbrush removal to lessen the intensity of fire), restoration and prescribed burning.

With the extra funds, the program was able to partner with the Colorado State Forest Service, a longtime partner of Denver Water, along with the Coalition for the Upper South Platte, a nonprofit conservation organization. The extra partnership meant additional treatment in sensitive areas that further protect the region’s water supply.

And for the most part, it appears residents understand that protecting this water supply means a slight increase in their water bill. Out of 1.3 million people Denver Water serves, Kennedy says he only got one call from a customer. And he was just asking for more information regarding the costs. “We’ve been actively informing our customers about our relationship with the USFS and the work that we’ve been doing,” Kennedy says.

This type of targeted spending is typical of Payment for Ecosystem Services (PES) programs, which aim to finance the preservation of nature by recognizing the economic value of nature’s services, and then convincing beneficiaries of those services to pay those who deliver them. Such mechanisms offer more transparency and accountability than do normal governmental structures – a key selling point in any economic climate.

The city of New York runs one of the best-knows IWS programs, which involves payments to rural landowners in the Catskill Mountains. This program has saved the city an estimated $10 billion since its inception in the 1990s.

Water utilities in developing-world cities like Dar es Salaam, Tanzania, have investigated the use of IWS schemes to preserve their water flow, while Latin American cities like Heredia in Costa Rica and Saltillo in Mexico have implemented successful programs that pay small-scale farmers to maintain the watershed. The result is clean, reliable water at a fraction of what it would cost to develop modern filtration facilities.

In 2010, when the From Forests to Faucets partnership was launching, Ecosystem Marketplace published a report documenting nearly 300 of these types of programs occurring all over the world that amounted to $10 billion in transactions in 2008 alone. Three years later, investments in nature-based solutions such as the From Forests to Faucets program has amounted to over $12 billion globally.

These programs have attracted interest from other places struggling with similar water challenges. The From Forests to Faucets program has influenced several other such partnerships with the USFS in Colorado. These include a program with Aurora Water – a major provider in Colorado’s Front Range region – and one for the Big Thompson reservoir that encompasses not only forest and watershed health but also maintaining hydropower facilities.

The From Forests to Faucet program’s reach has even extended outside the state. Kennedy mentioned other municipalities within the US West have reached out to him. Santa Ana, the densely populated California city, consulted with Kennedy and is seriously considering a partnership with the USFS along the same line as Denver’s. Kennedy also met with representatives from the Salt River Project, Phoenix’s water and electric power utility. The entity has since launched a partnership with the National Forest Foundation-the nonprofit arm of the USFS-that funds watershed-restoration activities through donations from water users.

Kennedy says the Forests to Faucets IWS model is adaptable to regions outside of the US as well although differences in ecosystems would, of course, have to be factored in.

“The concept of a ‘protection forest’ is nothing new, really,” says University of Massachusetts Professor Paul Barten. “The first written record of a community establishing something like this dates from 1342 in Switzerland, but back then the source of the water was closer to the users, so you didn’t need these kind of financing schemes.”

Both the Mexican and Costa Rican programs employed clever marketing to raise awareness, and Denver is no different. The name “From Forests to Faucets” borrows the name of a joint USFS/University of Massachusetts research project that Barten helped spearhead in the Northeast a decade ago.

“We came up with the name to make the connection,” says Barten. “We found that the larger the municipality, the more distant the supply of water – and the greater the tendency for it to remain out of sight and out of mind.”

And that lack of awareness cannot continue – especially in light of current demographics.

“We have twice as much forest in the Northeast as we did when the Forest Service was founded,” he says. “But we have three times as many people – and they consume ten times as much water.”

As for the From Forests to Faucets Partnership, there is no end in sight. While its future-in terms of finance-lies in the hands of Denver Water’s board, Kennedy thinks the program will continue to have funding because it makes sense. There’s still much to be done; primary objectives for the next few years include addressing the zones of concern that are at high risk of catastrophic wildfire and assessing more USFS land that may be beneficial to Denver Water.

And there’s always maintenance. “It’s like mowing your lawn,” Kennedy says. “You mow the lawn and then you have to trim bushes and so on. You’re never really done.” The thinning treatments and restoration work are effective for a period but they need to be followed-up on and maintained.

So it will always be something of a work in progress. But Kennedy is more than pleased with the program’s first five years. “It’s exciting because it’s almost all been really positive,” he says. “How often can you say that?”