New York City and the Costa Rican Paradise of Heredia each embarked on pioneering efforts to harvest the power of markets to protect their water supplies. While much has been made of New York City and its solution, few have heard of Heredia – much less how it handles its water. Yet the Costa Rican example offers a case study of what payments for ecosystem services can achieve in developing nations. 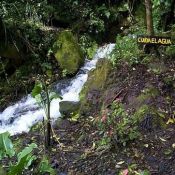 20 April 2009 | Residents of New York City in the United States and Heredia in Costa Rica tout their drinking water as among the best in each nation. But just a decade ago, the cities confronted adversaries that plague downhill communities throughout the world: upstate and uphill urban sprawl, grazing cattle defecating near streams, failed septic systems and polluted runoff that threatened their water’s purity.

In New York, regulators measured increasing amounts of nitrates and phosphorus that spur bacteria growth and suffocate waterways. In Heredia, the Porrosati River, one of the city’s primary water sources, became so polluted that its color changed from blue to green after farmers milked their cows. Unchecked, the water in these two cities could have become undrinkable.

The cities had two options. They could do what most communities do: ignore the problem until their water became so polluted that multi-billion dollar treatment plants were needed to clean it. Or they could attack the problem at its source.

From New York City’s perspective, building a filtration plant large enough to clean their water supply would cost more than it could afford, between $8-$10 billion in today’s dollars. From Heredia’s perspective, losing their city’s cache of environmental purity could destroy ecotourism, a primary source of income.

They quickly decided to fight their water’s continued deterioration.

This decision pushed them to the next one: how to control land they did not own.

They could try to get the government to regulate the problem. They could try to persuade corporations to preserve upstate land to buff up their social-responsibility images. Or they could attack the issue themselves.

The Limits of Government and Philanthropy

Both countries had passed laws decades earlier designed to protect their waterways, and both had seen those laws fall short of their objectives.

Costa Rica had its laws as well, including the incentive-based Forest Bill, which passed in 1969 and was designed to spur private companies through tax deductions to reforest areas as pollution buffers. It also made limited headway.

As for depending on donor largess, no private entity could pool together enough resources to address the problem. New York City’s watershed spans nearly 2000-square miles, an area roughly the size of the state of Delaware, with a labyrinth of 19 reservoirs and aqueducts cutting across nine counties that provide 1.2 billion gallons of drinking water daily to nine million New Yorkers. While the city of Heredia measures only about a tenth of the size of New York City and provides home to a fraction of the population, it depends for its clean water on the upper portions of five watersheds that together span 10,000 hectares or nearly 39 square miles.

The beauty of the deals, says Luis Gamez, director of the Costa Rican public utilities company ESPH and the driving force behind the Heredia deal, is that their success relies on simple financial transactions between buyers and sellers. Fully self-sufficient in funding, each city’s plan depends on neither government, private nor international aid. Instead, consumers pay for the entire transaction through their water bills.

New York City embarked on its initiative in 1997. Heredia began polling consumers in 1998 and charging them in 2000. Thanks to the program’s success, experts estimate New York City will pay $1.5 billion to preserve its watershed, or just over a dime invested on ecological preservation for every dollar that would have been spent on a filtration plant. Heredia, in turn, collected about $1 million in tariffs and has spent nearly $800,000 to preserve its watershed, Gamez said.

So far, Heredia has used most of its ongoing funding to compensate 27 uphill landowners to preserve or reforest 1191 hectares of land, about 4.5 squares miles, says Gamez. Landowners include wealthy investors who bought up former coffee plantations that no longer turn a profit. Their inadequate septic tanks built in land plagued by significant seismic activity, rainfall and humidity, spurs volcanic soil to leach nitrogen into the lower watershed.

In return for payments of approximately $50 per acre, the majority of participating landowners agreed to preserve existing forests on their land for at least ten years. A few also agreed to reforest portions of their land with native pines but this has proven to be a harder sell. Indigenous tree possess little commercial value and non-indigenous species require more water and fertilizers and would detract from the downstream water supply.

Although the cities’ strategies share major similarities, substantial differences exist that could impact their long-term success. Specifically, New York City could benefit by emulating Heredia’s consumer-outreach. And Heredia could benefit by having New York’s buying and regulatory power.

As for consumer outreach, Heredia launched a consumer-education program in the late 1990s that continues to this day. It began with a city-wide survey to determine local interest in paying for upstream preservation. The survey revealed a 90% support level providing the deal specifies that payments go exclusively to water preservation. Keeping funds out of the general dole keeps costs down to approximately 3.8 Costa Rican colones per square meter (roughly US $0.02 per liter of water).

This proves an especially good deal for a local bottling company, Florida Ice & Farm. The company purchases inexpensive plastic bottles, taps into the local water supply, pays its two-cent tariff and then packages and sells abroad for $2 per liter “pure water from Costa Rica.”

Heredia further fosters consumer buy-in by clearly demarcating on every water bill the portion spent for upstream preservation. And the city enhances enthusiasm by sponsoring an annual festival.

In contrast, “99% of people in New York City have no idea where their water comes from,” said Diane Galusha, author of the book, “Liquid Assets” that chronicles the development of the New York City’s watershed. Government officials – and not individual consumers – voted to launch the city’s water plan. And although New Yorkers’ water bills contain more than three times the fine print of those in Heredia – including an environmentally appealing announcement that bills are printed on recycled paper – no where do the bills acknowledge that a portion promotes environmentally friendly upstate land use.

New York City’s system, however, possesses two strengths that Heredia lacks: money and regulations. New York deploys its ample funding to monitor water and ensure its strategy works. Heredia, on the other hand, set aside no funding to empirically establish this. Moreover, New York City already purchased 70,000 acres of upstate land. Heredia, in comparison, has been able to purchase only 24 hectares of land, less than one-tenth of a mile, around important water-intake perimeters.

Yet purchasing land is “one of the most effective and crucial tools for permanently protecting water,” according to the Watershed Protection and Partnership Council.

Meanwhile, Costa Rica, unlike New York, has no land-use regulations to protect its watershed. So buyers can continue purchasing uphill land and tearing down trees despite Heredia’s water strategy. Gamez warns that if nitrogen levels continue growing as they have during the past five years, wells in the lower watershed could become unusable by the next decade.

A Case Study for Success

That Heredia’s system thrived without external funding and government regulation appears remarkable. But clearly increased funding and some regulation will be needed to ensure into the future that upstate land use does not pollute downhill resident’s water.

While acknowledging these shortcomings, Heredia none-the-less appears to have come up with a straightforward system for ecosystem success: it is easily enforced; revenue is earmarked, service delivery is good and it is simple and transparent.

Alice Kenny is a prize-winning science writer and a regular contributor to the Ecosystem Marketplace. She may be reached at [email protected].