Several studies have shown that gender equality isn’t just good for women – it also promotes overall economic development.  Such equality may also be a knock-on benefit of financing mechanisms that promote the maintenance of watersheds – but only if such programs truly are meritocracies, and only if women themselves are able to grab the opportunity. 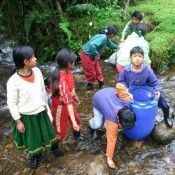 Several studies have shown that gender equality isn’t just good for women – it also promotes overall economic development. Such equality may also be a knock-on benefit of financing mechanisms that promote the maintenance of watersheds – but only if such programs truly are meritocracies, and only if women themselves are able to grab the opportunity.

17 December 2012 | Volcanic soil covers the paramo – the high, treeless plateaus along the Northern Andes of Ecuador. This black dirt acts as a sponge that absorbs rain and glacial thaw, then releases it through battered irrigation canals to the thirsty land below.

Men own the land above; they own the land below. And for centuries they have battled for their share of the water.

But battles are turning to cooperation with the advent of water funds, innovative financing mechanisms employed by downstream water users to promote upstream land conservation. Such funds – and similar programs that use markets and market-like mechanisms to promote sustainable land use – present opportunities for impoverished women to participate in economic activities long left only for men.

“The notion of a water fund is that anyone who contributes becomes a member, so anyone (male or female) has a voice and vote,” says Susan Poats, an anthropologist who is working to create a water fund in the El Angel river watershed near the northern border of Ecuador and Columbia.

The notion, she adds, appears simple. Turning it into reality, however, has been anything but.

Grandmothers and mothers with daughters in tow have hiked miles in Ecuador and other struggling nations to haul water, cook with it, wash with it and use it to irrigate their plants and care for their animals. Yet because women rarely hold title to the land where they live they are often excluded from forums where water allocation and management is decided.

This has become a key concern among environmental groups, grabbed headlines in international newspapers and become the focus of numerous panels composed of global leaders. Converting international concern into on-the-ground change, however, has proven difficult.

“The world of water is male,” Marta Echavarria told global leaders from the public and private sectors at the “Girls, Women, and Water” panel at the Clinton Global Initiative held in New York City last September. Echavarria is an associate of Poats in Ecuador and founder of EcoDecisií³n, a consulting firm focused on the issues of environment and business.

In May, Poats echoed a similar theme when she spoke at the Latin American Studies Association Congress held in San Francisco.

“A fundamental element which must be included in water governance is who participates and who is excluded,” she told her audience, “who are the winners and who are the losers.”

Valerie Issumo says the question of winners and losers is often more cultural than structural. A successful cocoa trader of mixed Belgian and Congolese heritage, she grew up in both cultures was one of the first to publicize widespread use of child labor in the cocoa sector in the 1990s. She sees parallels to water today.

Just as child labor was a tradition among cocoa farmers, so are the roles women take in water.

“It’s not that men are macho,” she says. “It’s simply because women are always feeling obliged to do it, because they always have.”

She’s spearheading the Ethical Water Exchange, which aims to promote water sanitation in cities across the developing world by putting a price on clean urban wastewater. Such mechanisms, she says, may help promote gender equality by rewarding activities normally carried out by women, but she says participants at all levels will have to understand the mechanisms and play fair if they’re to work.

Echavarria, who was born in Columbia and received a degree in environmental studies at Brown University in Rhode Island, helped spearhead FONAG, short in English for Fund for the Protection of Water, the first successful water fund focused on providing drinkable water while protecting its water source. Founded in the year 2000 in Quito, the capital of Ecuador, FONAG pulls together water and electric companies, the local brewery, Cerveceria National, and the bottled water company, Tesalia Springs to promote upstream conservation. These organizations now contribute to a fund that teaches upstream farmers how to improve cattle grazing and crop rotation methods in ways that increase crop production, reduce runoff and eliminate the need to build costly water treatment plants.

The Quito-based fund serves as a working model for establishing water markets among traditionally non-cooperating upstream and downstream users and across public and private lines to finance sustainable watershed management and conservation. Dozens of similar funds are sprouting up throughout Latin America.

The value of Echavarria’s very public leadership role in the water fund arena cannot be overstated. But the trickle-down in terms of pulling local women into positions of authority has been limited. Nearly all upstream landowners – AKA decision makers – are men. Meanwhile, the trust fund itself is operated predominantly by the municipal water company. Top jobs there, such as sanitary engineers and hydrologists, continue to be male-dominated.

The good news, says Echavarria, is that “women are gaining ground in all levels of Latin American society and …every day more active in politics.” However, she adds, “we are still not active participants in decision-making processes and thus end up not being considered…(in) the water world.”

The progress may be slow, but women are making inroads. Poats has worked with farmers, local authorities, NGOs and others on community-based conservation and watershed management in the Rio El Angel Watershed in Ecuador’s northern Andes Mountain for nearly 20 years.

Now, as a founding member of Corporacion Grupo Randi Randi, a nonprofit NGO whose name in kichwa translates as “giving-giving” (or reciprocity), Poats is working to build on FONAG’s success. But rather than follow FONAG’s path of establishing a water fund that promotes potable water, Poats is working with local governments, landowners and water users to develop a water fund that could be used to underwrite irrigation costs.

Poats returned recently to her brick two-story home in Cumbaya, just outside of Quito, after attending three days worth of marathon meetings devoted to this cause. The group made considerable headway, she says. They are negotiating with various government bodies and asking irrigators what they are willing to pay to protect their water’s upland source.

They are also deciding who can join the fund. And this is where the problem lies.

In theory, water funds should include the perspective of women as well as men, because they are equally likely to drink it, irrigate their crops with it and maintain the land where they live in ways that either does or does not protect its purity. In reality, however, men – fathers, husbands and brothers – traditionally hold title to the land, the watershed and the water that runs through it. Only a small percentage of women are considered “legitimate users,” folks with a direct right to use the water.

To include women’s perspectives in creating and controlling water funds, then, often requires welcoming women into water fund discussions who do not hold title to the land and water that runs through it and who do not hold leadership roles in the government bodies, corporations and organizations that are negotiating with these landowners.

“We are always trying to work out ways to make sure that we’re not creating any barriers for women’s participation,” Poats says. “But in the day-to-day adjudication of water, it’s still very much a masculine world.”

Issues of gender equality – of who gets to decide how to divvy up water’s scare supply – have, until recently, been pushed into conversation’s dark corners by the life and death battles struggling nations face over water theft, contamination, droughts and floods. Now female leaders born inside and outside these nations including Poats, Echavarria and Issumo are urging men to tap into women’s water expertise. And they are urging women to take their expertise to the next level by joining them as leaders in the emerging water fund movement.

“Whether urban or rural, (women) do the cooking, the cleaning, and the washing; and everywhere in the developing world – no matter what the religion – it’s always a girl or a woman who has to catch water when there is no tap water,”says Issumo. “Men may control water supplies, but – except for in agriculture – women deal with water issues.”