Carbon market participants mulled findings from the State of the Voluntary Carbon Markets 2014 report at a presentation in Washington DC. Although overall volume declined as certain offset projects transitioned into regulated markets, the participants were buoyed by the momentum in favor of projects that have strong benefits beyond just emission reductions. 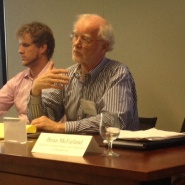 26 June 2014 | WASHINGTON DC | As Chief Sustainability Officer at the National Geographic Society, Hans Wegner uses voluntary carbon markets to offset those emissions the Society cannot eliminate. From his perspective, an oversupply of offsets in 2013 made it possible to choose only the very best offsets – meaning those that not only reduce emissions, but have knock-on “co-benefits” such as conserving habitat for endangered species.

“The good thing for people like us is that competition is also causing the value and the quality of the offsets to go up,” he said on Tuesday, as Ecosystem Marketplace presented findings from its State of the Voluntary Carbon Markets 2014 report at the offices of Hunton & Williams in Washington, DC. “For me, it’s really, really important – because credibility is so important to us as an organization – that we have everything verified, that we’ve purchased offsets of high value that are accounted for.

Now in its eighth year, the report tracks trends in voluntary carbon offsetting and serves as a bellwether for how and why corporations and governments are using market-based mechanisms to address climate change. In 2013, for the first time, pursuit of a climate-driven mission was the second most common buyer motivation, after resale.

“We theorize that this is because the climate surpassed some pretty dangerous thresholds last year,” said Ecosystem Marketplace Director Molly Peters-Stanley. “Based on interviews we’d had with offset suppliers, they say that the companies in the marketplace are more comfortable talking about the real risks that they face from climate change.”

For buyers such as the National Geographic Society, which use carbon offsetting in conjunction with various efforts to reduce fossil fuel, water, and materials use – and as a way to invest in critical landscapes around the world – market dynamics are such that they are getting many more calls from offset suppliers with impressive projects. Since National Geographic has direct control over only 4% of its emissions, the Society is purchasing offsets on behalf of its paper and other suppliers to neutralize its ‘scope 3’ or supply chain emissions. It also sees this as a way to spread the concept of offsetting beyond its doors.

In a year in which offset supply outstripped demand, suppliers able to demonstrate multiple benefits of their projects in addition to emissions reduction sometimes fared better. Offsets sourced from forestry and land use projects for the first time surpassed renewable energy as the most popular project type, with $126 million flowing to projects that address the drivers of deforestation, plant new forests or improve the management of existing ones. Many of these projects deliver benefits beyond emissions reductions such as protecting biodiversity hot spots, ensuring water quality and employing local people.

“There are good opportunities for those that add value and bring some new ideas to the market,” said Christian Dannecker, Director of Forestry at South Pole Group. “There is growth, but it’s much more diversified into different products and different transaction types than before, it won’t be only VERs (verified emissions reductions).”

The average price for offsets fell to just below the $5 mark in 2013, a dollar down from 2012, according to the State of report. Dannecker noted that the lower prices may have opened up opportunities to new market participants in emerging economies, such as the Colombian buyers they work with. For popular project types such as Verified Carbon Standard REDD and Gold Standard cookstoves and water filters, earlier stage projects fetched higher prices than those already issuing offsets – an important shift from previous years, when early-stage projects were viewed as risky rather than unique.

Buyers spent $379 million on 76 million tonnes worth of carbon offsets in 2013 – equivalent to taking 16 million cars off the road. This represents a sizeable drop in demand from the 101 million tonnes of offsets transacted in 2012, though as Peters-Stanley explained, a few factors are at play behind the scenes.

A look at voluntary offsetting over the years shows that pre-compliance transactions, or those that occur in anticipation of regulation, have played a significant role in past years, especially as buyers geared up for California’s cap-and-trade law and Australia’s carbon pricing mechanism. Pre-compliance activity in both of these markets was minimal in 2013, but for different reasons: In California, the compliance market has taken off, slurping up voluntary activity, whereas Australia’s carbon tax has floundered under political pressure. Also, offsets from Chicago Climate Exchange’s (CCX) legacy registry were traded on only one day in 2013, with small transactions volumes. The CCX was a voluntary but binding market, driven by commitments that were mostly made in pre-2010 anticipation of nationwide cap-and-trade in the U.S.

“The total drop that we saw in the marketplace last year is not necessarily related to a decrease in purely voluntary demand for offsets,” Peters-Stanley explained. “If we were to attribute a proportion to the actual purely voluntary activity in the marketplace that fell, it would be about 5%, versus the 26% that we have to report as the headline numbers. So it’s important to keep the more technical aspects of our findings in mind.”

…But Also Expand the Pie

The report findings also indicate that compliance markets can actually help to ‘expand the pie’ of demand for the voluntary market. European buyers were again the largest source of voluntary offset demand in 2013 despite the fact that the European Union (EU ETS) already caps the emissions of 11,000 companies. This may be because of what could be called ‘awareness-driven offsetting’: as reducing emissions through carbon investments is normalized under compliance, companies become familiar with the marketplace and also use offsetting as part of their sustainability efforts.

Though the EU ETS, the world’s largest compliance carbon market, excludes offsets from forestry, California’s new cap-and-trade market has welcomed them. The Yurok tribe issued the first compliance offsets under the Californian program in April from an improved forest management project on tribal lands.

“It’s very encouraging to see forest carbon offsets not only accepted in California, but also issued and retired,” said McFarland, who hopes that California’s Air Resources Board – the regulatory body charged with overseeing the cap-and-trade program – will move forward with an announcement to accept REDD (Reducing Emissions from Deforestation and Degradation of forests) offsets from Acre, Brazil and Chiapas, Mexico into the compliance program.

A live recording of the presentation is available here.