For many land-use sectors, the mitigation hierarchy is an effective way to manage the possible loss of biodiversity that comes with development. However, it isn’t used in several significant sectors like agriculture and forestry. That may be changing as new research finds that using the hierarchy can lead to net positive impacts for biodiversity within some of these missing sectors. 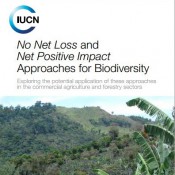 For many land-use sectors, the mitigation hierarchy is an effective way to manage the possible loss of biodiversity that comes with development. However, it isn’t used in several significant sectors like agriculture and forestry. That may be changing as new research finds that using the hierarchy can lead to net positive impacts for biodiversity within some of these missing sectors.

17 April 2015 | Agriculture impacts over 8,000 threatened species globally, according to the IUCN’s (International Union for Conservation of Nature) Red List of Threatened Species. The forestry sector isn’t far behind, impacting just below 8,000.

Despite the impact these sectors have on biodiversity, the IUCN finds that companies active in forestry and agriculture tend not to participate in conservation efforts that apply the four-step mitigation hierarchy: namely, seek first to avoid impacts, then to minimize those deemed unavoidable, then to restore the areas you impact, and finally to offset your damages by restoring comparably habitat nearby.

Contrast this with the extractive industries like mining and fossil fuels as well as the infrastructure sector. The global metals and mining corporation, Rio Tinto, for example, works with NGOs Flora and Fauna International and BirdLife International on its biodiversity strategy. And BHP Billiton, a multinational mining company, is in partnership with Conservation International. So these spaces have been involved with elements of the mitigation hierarchy since at least the early 2000s.

But these challenges can also offer opportunity. And in the fall of 2013, IUCN’s Global Business and Biodiversity Program convened with private sector and biodiversity experts to figure out how the mitigation hierarchy could be applied to the agriculture and forestry sectors. The outcome of that informal meeting is the report, No Net Loss and Net Positive Impact: Approaches for Biodiversity, published this week.

No Net Loss (NNL) and Net Positive Impact (NPI) are methods applied to development projects that either balance out negative biodiversity effects (NNL) or outweigh adverse activities (NPI) so the end result is a biodiversity gain. These approaches follow the mitigation hierarchy but since there aren’t any existing agriculture and forestry projects applying it, IUCN’s study uses hypothetical scenarios to demonstrate possible outcomes of NPI in these two sectors.

We wanted to gain a better understanding of the process and the context behind how NPI is applied in the extractive sector and then to tease out that process, says Stephen Edwards, a Program Manager within IUCN’s Global Business and Biodiversity Program. “Can we take that very same process and try and test out its application in agriculture and forestry?”

In short, the five steps of a NPI approach are: identifying priority biodiversity values, establishing a baseline or reference point, apply the mitigation hierarchy, implementation and monitoring. The study then applies this approach to three hypothetical landscape scenarios: existing managed lands, degraded lands and legal expansion into green fields.

As this research is essentially drawing from uncharted territory, Edwards along with Aiama, a lead author of the study, note the report isn’t meant to be comprehensive but a starting point to explore this area more. “This was an initial hypothetical exercise on getting practical experience from a collaborative partner and business perspective on the feasibility of applying NPI in a landscape, a farm field, a woodlot and a forest,” Aiama says.

Both Aiama and Edwards recently spoke with Ecosystem Marketplace about the creation of the paper and implications of NPI in the agriculture and forestry sectors.

EM: What were the main reasons for initiating this paper?

Stephen Edwards (SE): So we’ve seen net positive commitments to biodiversity from the mining sector and oil and gas sector increasing over the past 10 years. It started with work done by Rio Tinto and others back in the early 2000s and there has been a fair bit of progress made in terms of understanding what the commitments are and what the implications are. But the groups that are notoriously absent from those discussions are agriculture and forestry. These sectors-among others-have significant land impacts. Therefore, we thought that it was important to try to stretch our understanding to see if the agriculture and forestry sectors could consider a NPI approach.

Deviah Aiama (DA): It was timely to start exploring this subject. While we aren’t seeing net positive commitments in agriculture and forestry, we are seeing commitments to sustainability through recent initiatives that focus on taking deforestation out of supply chains, for instance. Also, agriculture and forestry have experience with sustainability standards that actually predates some of the NPI efforts in the extractives. It goes back to the 1990s when FSC (Forest Stewardship Council) was born. So we see efforts in these sectors that basically have biodiversity benefits.

It’s important to note also that the NPI’s five stage process itself is meant to be broad enough that it can be applied to a multitude of sectors and the way the five step process is presented in the paper isn’t specific to agriculture and forestry. It’s broad and generic enough that it’s applicable to tourism and so on.

EM:  Can you elaborate on why implementing NPI in agriculture and forestry is more difficult than in other sectors?

DA: There are difficulties and also opportunities. First, it’s not exactly a concept that has emerged in these sectors although arguably, there are linkages; for example, sustainable forest management standards. But agriculture and forestry aren’t as exposed to the financial sector and financial standards like IFC (International Finance Corporation). Also these sectors operate on larger spatial scales so production areas can be across entire landscapes compared to, for instance, a spatially limited mining scale. There are also differences concerning the temporal scale. Typically, forestry and agriculture are permanent land conversions. These areas are under production for the long-term. Of course, mine sites can be up to 50-100 years long but there is often a closure and rehabilitation phase which may not be there particularly in agriculture.

Broadly speaking and noting some exceptions, another difference is that agriculture and forestry usually involve a greater number of stakeholders. Agriculture, in particular, often deals with a range of producers, smallholder farmers, large contract farms, big industrial farms and so on. To coordinate action across a range of producers can be difficult. And finally, there’s the economics. Typically there is more upfront capital available in a mining project in part because of access to large loans through IFC for instance. Whereas in agriculture and forestry, they have smaller capital investments upfront and smaller revenue returns over the long-term. The marginal gains are smaller.

On the positive side, agriculture and forestry are often dealing with more dynamic landscape. That’s particularly true with forestry. A sustainably managed forestry operation has an opportunity to set a portion of its land aside to host wildlife so it’s easier to have restoration approaches implemented in a forestry landscape, as opposed to a mine.

EM: How significant are the agriculture and forestry sector to achieving the Convention on Biological Diversity’s (CBD) goals by 2020?

DA: If you look at the data from the IUCN Red List of Threatened Species in terms of threats, agriculture and forestry are essentially sectors that pose the highest threat to species primarily because of habitat loss, conversion and fragmentation. That’s also why IUCN is looking at these sectors. One of the CBD goals (Target 5) talks about no net loss of natural habitat by 2020. Without engaging the agriculture and forestry sectors on no net loss approaches, meeting that CBD goal won’t be possible.

EM: What particularly are you hoping to achieve?

SE: One: IUCN is hoping to gain a better understanding of the possible application of a NPI approach to different sectors beyond the extractives and to explore how might that be done. As Dev said, as of yet we don’t know of specific cases where this has been tried so we had to use hypothetical scenarios. The report documents that process and shows some possible avenues within those scenarios where a NPI approach might work and others where it won’t.  Going forward, the main recommendation of the working group is to pilot the NPI approach in specific agriculture and forestry landscapes in order to develop a better understanding and assessment of its practical application.

That’s what we want to achieve in the shorter term. Obviously, in the longer term, we’re hoping that all sectors reduce their biodiversity impact and generate the best possible returns for conservation.

EM: Is there a certain audience you’re hoping to reach?

SE: IUCN is trying to reach a broad range of audiences. We are reaching out to the business sector to gain a better understanding of these issues. We’ve been pleasantly surprised actually by the level of commitment and uptake of the mitigation hierarchy and these kinds of issues in the oil and gas and mining sector, as well as in the finance sector. Another important audience is the finance sector because of the leverage that they wield in terms of some of their performance standards, which are important. The NGO community is also key because it functions both as a civil society watchdog/advocate and as a support organization for businesses, finance institutions and governments. And, government is the one party that is going to have to apply regulations for these types of practices. In a voluntary realm, I think there’s only going to be limited amounts of traction.

EM: What are the key takeaways?

Where we’re most interested in looking when it comes to discussions around NPI is ensuring that there are clear credible and measurable biodiversity benefits coming out of it. While we’re in support of any efforts to improve biodiversity and conservation performance, we need to be cautious of throwing around claims without having them strongly based in science and done in ways that are clearly measurable, credible and transparent.

This piece was edited by Kelli Barrett, a freelance writer and editorial assistant at Ecosystem Marketplace. She can be reached at [email protected]