The Office of Environmental Markets (OEM) is moving again, to its third home in about a year. 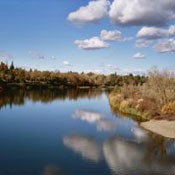 21 December 2010 |The Office of Environmental Markets (OEM) is moving again, to its third home in about a year.

OEM opened in 2008 under the name of Office of Ecosystem Services, but received a new name earlier this year when it moved to the Natural Resources and Environment mission area of the USDA.

Now, the Secretary of Agriculture has released a memorandum that directs a move for the Office again.   The USDA’s Office of Environmental Markets will now be a part of the Office of the Chief Economist . Those within the office do not see the move having a great impact on the continued work of the office.

“At this point in time, we do not expect it will impact the work we are doing, and in many ways it may strengthen some of our capabilities in the future,” says Al Todd, formerly the Assistant Director of the Forest Service’s Ecosystem Services and Markets and now serving as   OEM’s Chesapeake Bay Team Leader.

Currently, as a part of the NRE Mission Area, OEM is within the office of a USDA Undersecretary. With the move, OEM will be located within the Office of the USDA Secretary.

The change, then, means increased stability for OEM.   While the Undersecretary of the NRE is a political appointment, the Chief Economist   of the USDA is a long-term career position.

Beyond stability, the change will bring OEM new officemates: the Office of Global Climate Change is also under the umbrella of the Office of the Chief Economist.

The Office of Global Climate Change has provided coordination of   research surrounding carbon emissions and climate change in the Department.     In recent years, the Office has also been developing   protocols and standards for the carbon market as it relates to agricultural and forested lands in coordination with the Office of Environmental Markets.   New pilot projects for greenhouse gas emissions reductions were announced at the Cancun climate summit, in large part supported by the joint efforts of both Offices.

OEM has focused on developing guidelines, protocols and standards for all   environmental markets, including carbon.   Its direction in the 2008 Farm Bill placed a priority on carbon, as a subset of these markets.   OEM will continue to work directly with the Office of Global Climate Change on carbon as well as strengthening its efforts   on other environmental markets, such as biodiversity, wetlands and water.

Payments for watershed services and water quality trading are a high priority for OEM in the near term.

“There is a real marriage between us,” says Carl Lucero, the acting director of OEM, “because many of the same protocols apply to (all environmental markets). We have a much more active relationship.”

In addition to this connection, the Office of the Chief Economist is home to the Office of Energy. “With this move, we have these three offices with complimentary missions all centrally located,” says Lucero.

“The move…in the long run, may give us more access to   resources on the economic analysis side of things,” says Todd.     The Office of the Chief Economist brings with it expertise that OEM currently lacks.

Congress has not yet appropriated funding specifically for OEM. Funding for staff and projects will come through the Office of the Chief Economist with support from multiple USDA agencies and the   Office of Global Climate Change.

With   legislation regarding climate change stalled In Congress, and the   lack of a regulatory driver for the carbon market, an integrated approach to all environmental markets in this Office can make limited funding go farther.

What about the NRE?

Even though OEM is leaving the mission area of the NRE, the two offices will continue to work closely together, as the protocols and standards developed by OEM are utilized by the NRE.   NRE can also harness the capabilities of its agencies, namely the Forest Service and Natural Resources Coinservation Service, to use environmental markets in their many conservation programs.

“Our office will be working on the   infrastructure for the market,” says Lucero.   “And then, NRE will look to demonstrate those protocols in large-scale projects.”

However, OEM will continue to implement many of their own projects, advocating for the application of environmental markets in a variety of settings, such as farms and forests.

For individuals like Todd, the continuity of this work is important.   Todd has just recently moved from the Forest Service, to OEM to support both NRE and OCE in the implementation of a recent Executive Order for the Chesapeake Bay.

“The NRE and the Office of the Chief Economist both agreed that the Chesapeake Bay is one of a   limited number of national focus areas where markets are or at least have the potential to grow and mature maybe more quickly than other parts of the country,” says Todd.

Although some new coordination may be needed, his role and the approach to the project will not change;but rather, it enforces previous aspects of the project’sdevelopment and implementation.

“It creates a situation where we need to coordinate   closely with the folks in the Undersecretary’s office since the NRCS and the Forest Service are two primary agencies…more engaged on the ground listening directly to land owners,” says Todd.   The roles of the agencies in concert with OEM are crucial toward buidling access to and advancing environmetnal markets

For the individuals in the OEM office, they believe the move is mainly administrative, with little affect on the long-term work of the office, however the full potential of the move will not be known until the office has fully settled into its new home..

Mainly, the work of Office of Environmental Markets   is to foster the development of science-based guidelines, standards and protocols for   environmental markets and to help farm and forest landowners and communites access these markets.. .   The Office is working on a variety of projects to fulfill its mission.     For example, one current project, titled “Farms of the Future,” reveals the improved environmental condition and increased revenue streams that can result when landowners begin to utilizing environmental markets.

OEM will continue to serve as a catalyst for bringing   federal agencies and other partners together to support this innovative work.