The US Environmental Protection Agency on Monday will announce both its emission-reduction targets for existing power plants and it’s guidelines for how states can best meet them. Over the weekend, President Obama offered a clue into those guidelines when he praised existing cap-and-trade programs in California and the Northeast. 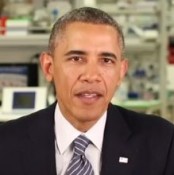 The US Environmental Protection Agency on Monday will announce both its emission-reduction targets for existing power plants and it’s guidelines for how states can best meet them. Over the weekend, President Obama offered a clue into those guidelines when he praised existing cap-and-trade programs in California and the Northeast.

1 June 2013 | It’s been nearly a year since Gina McCarthy took over the US Environmental Protection Agency (EPA), and she’s spent a good deal of that time working with states to develop and implement President Barack Obama’s new carbon-dioxide emission standards for existing power plants. On Monday, she and the President will unveil both the new standards and the EPA’s guidelines for how states can achieve them.

The assumption kicking around Carbon Expo in Cologne last week was that the EPA would mandate a reduction of between 25% and 30% by 2030, with 2005 as the baseline year. The question, however, was on how states would be permitted to achieve those targets – and, more precisely, what role cap-and-trade and offsetting would play. President Obama partially answered that over the weekend, when he praised existing cap-and-trade programs in California and the Northeast, but the devil will be in the details.

Nicole Singh is Executive Director of one of those programs, the Regional Greenhouse Gas Initiative (RGGI), which is a cap-and-trade program covering nine states (Connecticut, Delaware, Maine, Maryland, Massachusetts, New Hampshire, New York, Rhode Island, and Vermont). She says people in her part of the country have been clamoring for cap-and-trade all year.

“The RGGI states have pretty much been saying, ‘Hey, flexible, market-based, mass-based programs work,” she said on Friday, during a panel discussion at Carbon Expo in Cologne. She wouldn’t, however, speculate on exactly how that demand will be reflected in Monday’s guidelines, or what restrictions would be placed on offsetting.

Tom Lawler, the Washington, DC representative of the International Emissions Trading Association (IETA), said that he believed many states would try to join existing programs.

Will Ferretti, Chief Operating and Financial Officer of the Verified Carbon Standard (VCS), also sees a scaling up of both RGGI and the California program, and he believes this could also spark a revival of “pre-compliance” buying – which is when companies buy offsets in the voluntary market in order to be grandfathered into the cap-and-trade market. The most recent Ecosystem Marketplace “State of the Voluntary Carbon Markets” report tracked roughly  15 million tonnes of pre-compliance offsets in 2012, but just 300,000 tons in 2013.

Much of that pre-compliance volume migrated into California’s cap-and-trade market, and Ferretti sees a similar dynamic playing out in new markets. He also pointed out that California accepts offsets generated by either planting trees or saving endangered rainforest and may accept international offsets as well. He said he would like to see both practices allowed under the new guidelines.

“[California is] creating this unique opportunity for projects that are developing within those jurisdictions that heretofore have been serving primarily the voluntary carbon market to make their way into a compliance market,” he said, referencing California’s outreach towards states in Mexico and Brazil. Those provisions, however, have faced stiff resistance in some quarters, and are currently in a holding pattern, even as the state moves forward with domestic forestry offsets.*

Market participants emphasized that Monday’s guidelines will probably change dramatically before being finalized in June, 2015. States will also have until June, 2016 to submit their final proposals. That, however, does’t take into account the legal challenges that will inevitably arise.

The Case For Offsetting

Singh points out that RGGI states have already reduced their greenhouse gases from the power sector by roughly 40% over the period 2005-2012 – while achieving GDP growth of 7%. That made it possible for them to lower their cap by 45% – from 165 million short tons to 91 million short tons – and to do so through a process that involved stakeholders.

“When the program was being designed, the states were aiming for maybe a 10% reduction,” she said. “While we were having this decline in power-sector emissions, we were actually seeing the economy grow – unlike some other regions of the United States.”

“One of the concerns for any program is leakage,” she said, referring to industry argot for what happens if emissions reduced in one part of the world simple migrate to another. “Obviously, if there are requirements for other states besides the RGGI states, we can be less concerned.”

The EPA’s McCarthy has been talking flexibility every chance she gets, and even did so on the Daily Show (see video below).

“We’re going to make it flexible, but you’re going to get significant greenhouse gas reductions out of it,” she said, “Our job is to try to drive those reductions nationally, but to make sure that every state is differently positioned. Some have already done really impressive energy efficiency work. You know what? They could do a lot more.”

Her talk was of efficiency, and she was quick to shoot down talk of negative economic impacts.

“EPA’s been around for 40 years, and we’ve figured out a way to avoid apocalypses,” she said. “We’ve cleaned up the air – 70% reduction in our air pollution – while we’ve doubled the GDP. So it can be done, and with climate you have to move forward in a common-sense way.”

Bruce Braine, Senior Vice President of AEP Energy Services, points out that his company has already reduced the percentage of energy it gets from coal – to 60% down from 90% in 1998. He lamented the failure on the part of lawmakers to find a legislative solution, and worried that the EPA would encounter legal challenges.

“Legislation gives you the flexibility to develop the rules you want specific to CO2,” he said. “The problem is that the clean air act was never designed with CO2 in mind, and the provisions that the EPA is using are a bit like putting a square peg in a round hole.”

Specifically, he predicts a challenge based on a narrow interpretation of the Clean Air Act’s Section 111(d), which is the provision the Obama administration is using to develop the guidelines.

“The Clean Air Act stipulates that under Section 111(d), reductions have to occur source-specific at the plant with local air pollutants in mind,” he said.

Harvard Law School professor Jody Freeman also expects legal challenges, but she believes the EPA will prevail. She was President Obama’s counselor for energy and climate change in 2009-10.

“These emissions qualify for regulation under 111(d) because they are not covered elsewhere in the law and account for nearly 40 percent of the nation’s total emissions of carbon dioxide, the principal driver of global warming,” she wrote in the New York Times. “Ultimately, states could adopt whatever measures they preferred, including cap-and-trade programs that place a limit on carbon pollution and create markets for buying and selling pollution permits.”

She notes, however, that when the EPA tried to use Section 111(d) to establish a nationwide cap-and-trade program on mercury, a DC court shot it down – although without addressing the agency’s use of its 111(d) authority.

* CORRECTION: The initial wording implied that California already accepted international offsets, which is not the case. This is the corrected text.