US Supreme Court decisions of the past decade have left wetland regulations unclear and unenforced.  New clean water guidance from the Obama administration aims to provide clarity and expand enforcement while not contradicting the decisions.  The result could be improved protection of drinking water – and expanded use of markets to aid that protection. 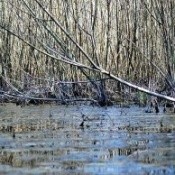 US Supreme Court decisions of the past decade have left wetland regulations unclear and unenforced.   New clean water guidance from the Obama administration aims to provide clarity and expand enforcement while not contradicting the decisions.   The result could be improved protection of drinking water – and expanded use of markets to aid that protection.

9 May 2011 | The Obama administration last week proposed a national clean water framework that could expand the protection of wetlands and waterways across the United States by providing new guidance for the Clean Water Act (CWA) that clarifies which waters and wetlands the CWA protects and which it does not.   Comments can be offered here.

The new framework encompasses all current actions aimed at ensuring clean water across the country, as well as future plans for continued collaboration with communities and NGOs.   It has won support from conservationists, outdoor enthusiasts and regulators alike for aiming to expand protection of waterways without requiring new legislation or violating Supreme Court decisions that threw the definition of covered wetlands into question.

”The steps we’re outlining today will be instrumental to protecting the waters of the United States, and ensuring that the vital natural resources our communities depend on for their health and their economy are safeguarded for generations to come,” said EPA Administrator Lisa P. Jackson at the time of the release.

The proposed guidance is meant to ensure the protection of specific waterways that have been under threat since the Supreme Court decisions of Solid Waste Agency of Northern Cook County vs US Army Corps of Engineers (SWANCC) in 2001 and Rapanos vs United States in 2006, both of which led to confusion among regulators, landowners and others about which waters were under federal regulation and which were not.   These decisions, as well as Army Corps of Engineers (USACE) guidance in 2003 and 2008, had removed regulated protection on 20 million acres of seasonal wetlands as well as intermittent streams that impact the water quality of 117 million Americans.

Guiding Within the Lines

The new guidance neither changes federal legislation nor contradicts the Supreme Court, but it could expand the number of wetlands under USACE regulation.   The degree of that expansion, however, won’t be known for years.

“This guidance would restore protection to a portion of the wetlands and streams and other waters that has had clean water protection withdrawn since 2001,” says Scott Yaich of Ducks Unlimited.   “More importantly, the terms of the underlying principles of the draft guidance would be truer to the Supreme Court decisions and to Congress’ expressed intent that the Clean Water Act should broadly protect wetlands and other waters of the US.”

Some fear that this expansion would place an unnecessary regulatory burden on those seeking to develop lands adjacent to wetlands, but supporters argue that clarity encourages more efficiency in the permitting process.

“As the information comes in, the agencies are able to make these decisions in a more scientifically-sound basis,” says Jan Goldman-Carter of the National Wildlife Federation.   “I think we’ll see more efficient clean water implementation as a result.”

In addition to wetlands, the proposed guidance would expand the CWA protection to additional US waters.   Due to its clarifying nature, the guidance will increase the number of tributaries and seasonal streams that are protected.

The guidance comes on the heels of a Florida court decision that supports the federal Environmental Protection Agency’s (EPA) authority to put “numerical” limits on the amount of effluent flowing into Florida’s waters.

If numerical limits are instituted in other states—which is a definite possibility—this guidance could have an even greater impact.   Though it remains to be seen what regulators will do, those looking to mitigate their nutrient impacts on U.S. waters could turn to water nutrient trading.

Numerical limits have a high possibility of being instituted in other states.   Combined with this proposed guidance that expands coverage of the CWA, there could be an increase in the use of market-based mechanisms designed to comply with the law in the most efficient way possible.   Numerical limits are a cornerstone of cap-and-trade-like water nutrient trading mechanisms.

The Big River’s Connected to the Little River…

The opinion from the Rapanos case, written by Justice Kennedy, had included the idea that protected waters included waterways and wetlands that had a significant nexus to traditional waters.   Previously, this definition of “significant nexus” has to be determined on a case by case basis; now it is more clearly defined.

The guidance clarifies that small streams and seasonal streams will be protected if they have a physical, chemical or biological connection to the traditionally protected waters and therefore could affect the quality of these waters.

Goldman-Carter sees the comment period as an opportunity to bring the science of why these tributaries and intermittent streams are important to light.

“It is an opportunity to show the agencies and – indirectly – to show the justices of the Supreme Court, how these waters are interconnected and important to protect in order to achieve the goals of the Clean Water Act,” she says.

“You cannot protect a navigable waterway if all the tributaries to that waterway are unprotected,” says Jackson.   She adds that the question then becomes how far upstream federal protection applies.

This debate is going on right now in the Chesapeake Bay.   The TMDL for the bay covers its tributaries and upstream waters which are spread over multiple states, i.e. a very extensive area.   But some are pushing back against this regulation.

Even with the confusion surrounding the court language, certain US waters have always had undisputed CWA protection.   These include:

The ones that have been debated this past decade are the tributaries that feed into these previously listed waters.   These tributaries were only protected when a significant nexus between the tributary and its adjacent water was discovered by the government.

The current proposed guidance does make room for protecting some of the more isolated wetlands like prairie potholes that are important to water quality and habitat health – if the science is moved forward.

“Probably the single biggest strength of this guidance versus the former guidance is that this guidance more clearly articulates the science of aquatic ecosystems and it makes it easier for the agencies to bind that significant nexus as it relates these small streams and their adjacent wetlands,” says Goldman-Carter.

The clarity of the new guidance also gives greater protection to the headwaters of these tributaries which may only be seasonally damp.

What Areas are not Included?

Just as important as what the guidance includes in CWA’s protection is what it continues to exclude.   Though those opposing the guidance think that it will open the floodgates of waters brought under the CWA, supporters still see a very clear list of the US waters and wetlands that are not currently under federal protection.

The guidance, according to Goldman-Carter, has very clear language about what is not included in this regulation.   These include wet areas like ponds, roadside ditches and artificially irrigated areas.

In addition, farms continue to be exempted under this guidance.   While the purpose of the guidance is to clarify which waters are protected, it also includes language describing which activities—such as standard farming practices—continue to be exempted.   These practices include planting, seeding and harvesting.

What farmers cannot do is develop and drain a protected wetland on their property for the purpose of farming.   If they do decide to develop these wetlands, farmers will be required to engage in mitigation activities.

“It is important to understand that the draft guidance explicitly maintains long-standing exemptions from the Clean Water Act jurisdictions for standard agricultural activities as well as for normal ranching, forestry and other economic activities that have existed in the law since 1977,” says Yaich.

Though supporters of the guidance are glad that the federal government was willing to take on this complex issue, they also want to see it move forward.

Yaich says that the guidance’s central weakness is the challenge it lays out for protecting these geographically isolated wetlands, such as the prairie potholes of the northern Great Plains.   Though these wetlands may not share a significant nexus with traditionally protected waters, they are important for ecological health.

Yaich and Goldman-Carter are just some of the individuals in support of developing a federal rule.   This type of rule would more explicitly explain the biological connections between tributaries and traditional waters.   It would also be much more enforceable than this current guidance is.