Investors and buyers have shrugged off the global recession and uncertainty over climate talks to funnel record amounts of capital into forestry projects that reduce greenhouse gas emissions by conserving forests and capturing carbon in trees, according to Ecosystem Marketplace’s “State of the Forest Carbon Markets 2011: From Canopy to Currency”. 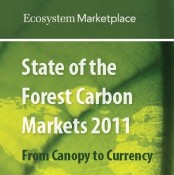 29 September 2011 | Washington, DC | Investors and buyers have funneled record amounts of capital into forestry projects that reduce greenhouse gas emissions by conserving forests and capturing carbon in trees, according to a global survey of carbon market participants published on Thursday by Forest Trends’ Ecosystem Marketplace.

“Contracts for forest carbon offsets more than doubled over the past two years, likely due to international policy discussions, and increased awareness of the critical role forests play in sequestering carbon,” says Katherine Hamilton, Ecosystem Marketplace’s Director and a report author.

Co-author David Diaz, also of Ecosystem Marketplace, agrees with the clear signs of progress, but sees a long road ahead.

“These markets have shown tremendous innovation and growth, but we are still a long way from channeling a sufficient amount of funding to reign in global forest loss as a critical source of greenhouse gas emissions,” he said.

This is Ecosystem Marketplace’s second State of the Forest Carbon Markets report, which is compiled annually and builds upon data from hundreds of projects and interviews with dozens of market participants to uncover and analyzes trends by project type, country, and regulatory environment.

“This excellent source of information on market transactions in the forest realm is a vital part of our long-term vision to support land-use projects to reduce greenhouse gas emissions and combat climate change in an environmentally and socially responsible manner,” says Ellysar Baroudy, who manages the World Bank’s BioCarbon Fund.   “The forest carbon market is gaining momentum and it’s important to step back once a year, take stock of the achievements to date as well as the challenges, and use this data to prepare for the future.”

The report shows a decline in the number of projects that plant trees, a steady increase in projects that promote improved forest management, and a surge in projects that save endangered rainforests (REDD – Reduced Emissions from Deforestation and forest Degradation).   Indeed, despite being the source of the earliest carbon offset transactions, REDD projects roared back from near obscurity just a few years ago to account for nearly 70% of the market activity last year.

The report also finds an influx of private-sector project developers, investors and intermediaries willing to market these credits – a clear transition from previous years, when conservation non-profits paved the way by developing most of these projects.

“The influx of private-sector investment is a positive indication that some of the major financial firms have a level of confidence – albeit backed by early-stage market risk – that forest carbon projects will play a significant role in the future of carbon markets and in reducing global GHG emissions,” says Steve Baczko, Director of Commercialization for ERA Ecosystem Restoration Associates Inc.

A strong demand for projects with other environmental and social benefits beyond carbon reductions is also now apparent, particularly through independent certification of each project’s carbon reductions and broader environmental and community benefits.   In 2010, the leading standard for demonstrating carbon reductions was the Verified Carbon Standard (VCS), which was applied to more than half of the credits projects planned to deliver.   Beyond carbon, additional certifications to the Climate, Community & Biodiversity (CCB) Standards found widespread appeal.

The hundreds of projects tracked in this report (many of which have public profiles on Ecosystem Marketplace’s Forest Carbon Portal, www.forestcarbonportal.com), come from a broad spectrum of project developers, governments, indigenous and community groups, and the private sector demonstrate that forests projects can and are meeting many of the demands for high-quality emissions reductions.   What remains to be seen is whether this work of this diverse sector will be meaningfully scaled up and incorporated into the efforts international negotiators and other policymakers are now designing for the bigger fight against climate change and to conserve the world’s forests.

Support for Ecosystem Marketplace comes from USAID, the Gordon and Betty Moore Foundation, the David and Lucile Packard Foundation, the Norwegian Agency for Development Cooperation, the United Nations Development Programme, the Global Environment Facility, and the John D. and Catherine T. MacArthur Foundation.  For a copy of the report, please visit www.ecosystemmarketplace.com/reports/forestcarbon2011