In an effort to support their groundbreaking REDD project, the Amazonian Paiter-Surui People have been patrolling their forest in search of illegal loggers.  Last week, Chief Almir Surui and a small band of his fellow tribesmen received a tip about illegal logging on the territory.  Rachael Petersen accompanied them on the expedition and filed this report. 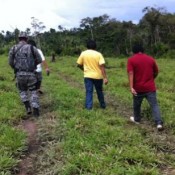 This story has been adapted from Rachael Petersen’s blog. You can view the original here.

And if you’re Chief Almir Narayamoga of the Surui, make sure to remember your high-tech video recording sunglasses.

New field sites often require weeks of cultivating trust, understanding, and the relationships to yield interesting work. Which is why when I first arrived at the Associacao Metareilí¡ headquarters outside the city of Cacoal in the state of Rondí´nia, Brazil, clad in a long flowing skirt and Chaco sandals, I expected a calm day of office humdrum: researching, talking to my Surui colleagues, reading over their 50-year plan. But when Almir invited me to track down reported illegal logging in the territory, I couldn’t say no.

Hours and kilometers into the jungle, I realize: the Amazon itself is now my office. And I should never leave home unprepared to face it.

Things in the territory are tense. Loggers continue to lodge death threats against Almir, the leader of the indigenous Paiter Surui people, due to his efforts to protect the forest in his territory, La Sete de Setembro. As I write this, one of Almir’s ever-present personal bodyguards from the Brazilian Força Nacional sits to my left polishing his automatic weapon with a pink toothbrush.

How absurd, I thought to myself as we trekked together through the oppressive humidity of the Amazon, that preserving nature has become a matter of life or death, the source of animosity and aggression. The situation speaks to the specific importance of exploiting natural resources to the local economy as well as to the general human tendency to overvalue immediate gains and underestimate long-term costs.

At a distance- from planes and satellites imaging-the Sete de Setembro territory looks like an island of trees amid a sea of historical deforestation. So for many local loggers, the Surui sit on a pot of gold to be exploited at all costs. But for Almir, the forest- of priceless importance to the Surui life and culture- can be protected by stimulating economic alternatives to logging. This vision’s supported by countless partners like USAID and Google and strengthened by the use of digital tools-has earned the Surui international attention. Their visionary 50-year life plan calls for an end to the unsustainable logging that serves as the historical financial lifeline in the territory and proposes economic alternatives such as commercialization of agricultural and artisanal goods and payment for ecosystem services. The Surui hope that others will pay them for preserving the forest in the form of carbon credits for avoided deforestation. This money will enter a locally administrated fund that will support an environmentally and socially-sustainable future in the territory.

It is a high-stakes game of indigenous peoples, governments, international NGOs and investors. It is a game that requires extensive monitoring of the forest to document illegal incursions that compromise this sustainable vision. Traditional knowledge of their territory must be writ digital through photographs and gmapping to render public forest conservation progress. So when the Metareilí¡ office received an anonymous tip last week that someone cut down trees in the territory, Almir and team had to conduct the due diligence that puts such incidents on the literal and figurative map.

Our trip from the Metareilí¡ office to the territory’s border lasted a grueling hour and a half. The Força Nacional truck shook as it passed over pocked dirt roads. A cocktail of antibiotics, antimalarial medication, and coffee stirred in my stomach; I was sure I would vomit. “Don’t do it don’t don’t do it,” I chanted to myself, acutely aware that such a sign of fragility could mark me as a woman incapable of tolerating Amazonian conditions. Surprisingly, I deep-breathed my way through the journey and we reached the village of chief Almir’s family, Lapetanha. After a short conversation, we were on our way again, off to search out the loggers.

We ran into trouble when our two trucks reached a bridge, or really, two deteriorating logs aligned with the wheels of the truck. Almir’s truck crossed first, but the front left wheel quickly fell between the logs. Using a cable mounted on the front of the Força Nacional truck, we towed the fallen truck from out between the logs. Deciding we could not cross, we-Almir, two guards, myself, and four other Surui-continued on foot.

Which is how I found myself ankle-deep in reddish clay mud last Friday with Chief Almir and other Paiter-Surui colleagues, hiking fifteen kilometers on the tails of illegal loggers. The sun beamed threats at my fair skin, made even more sensitive by a daily dose of antimalarials. The humidity rivaled a Houston summer. Almir joked about my sweat-soaked hair; others would later express surprise that a young American girl made it through the exhausting hike.

The path we traced through the territory was fresh, recently trampled by loggers. Two hours into the walk, we encounter freshly-cut logs, their shameless tan nakedness a startling interruption in the surrounding deep-green abyss. I waited behind talking with a colleague while others followed a small path to find a patch of stumps. Having found the evidence we sought, we returned to our abandoned trucks a few hours later, exhausted, having gone without food or water for hours. We stop in Almir’s aldea for water, chica, and bananas before making the long return to Cacoal.

The next evening, Almir invited me to his house for roasted wild boar. On the way, we also picked up Steve Zwick, an American journalist and the managing editor for Ecosystem Marketplace, who had arrived to work on his biography of Almir, to be published this year.

Steve asked if Almir video recorded our mission the previous day. “Yes,” he responded. But I was certain I saw no video cameras on our trek.

“Uh, he didn’t record anything in my presence,” I interjected.

“I recorded it all with my eyes, with my glasses,” Almir insisted. He must be joking, I thought, speaking metaphorically, or perhaps making light of his lapse.

But after dinner, he retrieved a pair of Oakley-style sunglasses from his living room. “I recorded everything with these,” he stated, indicating a small, unmistakable camera lens in the middle of the nose bridge. He had bought them during a trip to Switzerland, he confessed, aware they could aid in documenting the forest.

I launched into laughter. “You had no idea I was filming?” Almir asked me. “No!” I said, half afraid he caught embarrassing footage of my mud-covered huffing and puffing from the previous day. He modeled the sunglasses for us and began recording,joking that he was creating an informational video about Americans.

He removed a small memory card from the sunglasses and inserted it into his computer. The video from our trek-of surprisingly high quality- revealed the destruction of the forest we witnessed, including the roads, freshly cut wood, and stumps bespeaking invasion. Indeed, Almir had captured our jungle trek through his eyes, branded in memory but packaged in MegaBytes.

“This shows that indigenous peoples are doing their job,” Steve admired, “they’re doing the work.”

Almir has witnessed tremendous turmoil within his tribe, which was first contacted in 1969. He now hopes to witness a brighter future- one in which his peoples financial riches do not depend on depleting their remaining natural riches. And with the help of technology, the Surui will not witness this change alone. Their traditional knowledge and surveillance of their lands can be transmitted to the world via videos and maps. But Steve is right: it is not the technology or fancy camera-sunglasses that do the work in the territory, it is the people. And despite being the subject of flashy headlines ( Tribe saves the forest using internet), the Surui have a lot of work ahead of them. I certainly have the sunburn, insect bites, and muscle aches to prove it.