The US federal government last week chose not to list the Dune Sagebrush Lizard as endangered – largely, they say, because a voluntary landowner program is sufficient. Here’s a look at the novel approach to conservation that could set a nationwide precedent of Texas-sized proportions. 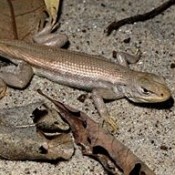 The US federal government last week chose not to list the Dune Sagebrush Lizard as endangered – largely, they say, because a voluntary landowner program is sufficient. Here’s a look at the novel approach to conservation that could set a nationwide precedent of Texas-sized proportions.

18 June 2012 | The US Department of Fish and Wildlife last week withdrew its proposal to classify the Dune Sagebrush Lizard species as endangered – largely, it says because the, ‘Texas Conservation Plan’ has done its job so well by providing for the conservation needs of the vulnerable Lizard without the added challenges of compliance that Endangered Species status would have brought.

It’s a clear endorsement of a unique program pioneered by the Texas Comptroller of Public Account together with the Southwest Region of the federal Fish and Wildlife Service (FWS), who forged the Plan over 10 months ending on February 17th, 2012.

The Plan is actually a Candidate Conservation Agreement with Assurances (CCAA), a format used for many years by FWS to reward private landowners for doing ‘good things’ for species so threatened with decline they are on the verge of being listed as endangered. These species are called Candidate Species, and if listed, landowners who had chosen to be covered by the CCAA are ‘assured’ that as long as they keep doing these good things FWS will ask no more of them.

It is this ‘voluntary program’ that the Texas Conservation Plan establishes in an effort to balance the needs of diverse stakeholders and a complex collection of interested parties – the first of which, arguably, is the lizard itself. It entered the listing queue since 2004, yet its journey began in the 1980’s.

The other major West Texas player is the Oil and Gas Industry, which has learned that the lizard’s 190,000-odd acres of habitat lie in the Permian Petroleum Basin– one of the nation’s most productive and sought-after basins responsible for 20% of the contiguous US oil production, according to the University of Texas.

Of course, this makes FWS a key player too. They are also in charge of ensuring compliance and enforcement once the species is listed, so they are keen to do what they can to encourage pro-active, incentive- or voluntary-based conservation as a first resort: heavy-handed enforcement is costly and unpleasant for everyone. It’s this approach that CCAAs are signed to represent.

The Dune Sagebrush Lizard is only one of many candidate species around the country, and many of these species are also attracting concern from a disparate collection of affected groups. The one thing all can agree upon is that the best solution to more effectively address candidate species conservation is one that comes before listing occurs.

Unfortunately complex problems such as this are often solved with complex solutions, and the Texas Conservation Plan is no exception. This CCAA is like no other because, for the first time, it has the provision to be rolled over to be a Habitat Conservation Plan (HCP) if the species gets listed. HCPs typically plan for both the conservation and impacts to one or more species (known as ‘Taking” a species), and compensation specifically for any loss. These types of documents have existed as very different beings since their inception, so linking them in this way is un-charted waters.

With all these details, the Plan is a long document, involving a number of layers. Those familiar with previous CCAAs and HCPs are giving it careful attention to work out exactly what the details are, and how they could apply to other species in these other areas. With FWS’s affirming decision, this new take on an old conservation template gets even more points. But that doesn’t have observers breathing easy yet.

What can go Wrong?

If the plan delivers on its goals and saves the species then it’s a progressive development everyone can be proud of; but if the Plan doesn’t deliver on its objectives,the precedent it sets could have wider-spread negative outcomes.

So why is there such a concern with the Lizard?

Firstly, the novel, un-tested elements of this approach makes hard to judge how well those incentives and requirements will occur on the ground. CCAAs are, by their nature, specialist documents with more that just a list of ‘good things’ or landowners to do. Even experts familiar with the traditional format have to read through a number of components in the CCAA to determine how those requirements and incentives to participate actually take effect.

Second, lack of scientific information about the species has been one reason against listing the species. For the same reason listing-proponents suggest it should; protect the lizard now so it can be studied before it disappears. Either way, it is difficult to design a plan to conserve a species when it is unclear what the lizards need to prosper, or how much. Even with plenty of room for research and changes to activities, the Plan can’t avoid this risk.

Finally, it’s hard to ignore the fact that the strong incentives needed for conservation don’t actually benefit those who have helped design this plan. While many landowners, ranchers and oil and gas operators are content to avoid and minimize negative effects to species such as lizards, it’s unheard of to them to actively advocate for actives and land-use options to be curtailed in the way required for real incentives or requirements for conservation.

The Role of Conservation Banks

There is one group however who do. Some landowners and companies make a living from conserving species on private land. These conservation and species bankers create credits from the land they conserve and sell these credits to maintain their business.

The Plan lists a range of activities a landowner may undertake to earn ‘credits’. These are ‘conservation measures’ aimed at avoiding habitat damage and include the implementation of prudent grazing and vegetation management activities and the active repair and restoration of habitat where roads or drill-pads are no-longer needed, as well as the restriction of disruptive activities such as seismic drilling and the limitation of recreational vehicle use to times and places least damaging. Participants can also contribute to research and monitoring efforts not often available as conservation options, but much needed for this poorly studied species.

But to have a system where landowners have the incentive to create, buy and sell these credits requires a few more details, and these are buried within the Plan in a way that mean different readers produce different opinions.

Regardless of what details there are, there are some clear differences between other species credits. Other credits must be perpetually protected by a conservation easement, and funded continually by an endowment fund. Conservation Measures should result in habitat results – a certain number of defined type of trees for example. The Plan maintains that the needs of the lizard are just too unclear to put these kinds of conditions in, but if this is the way of the future for candidate species then much of the gains made by conservation banks and species credits to date will be undermined. Ultimately, this means species conservation would be lost.

If the Plan and the work between the Texas Comptroller’s Office and FWS indeed can unlock the key to really conserving candidate species and stemming the tide of endangered listings then there is reason to celebrate. The Endangered Species Act is one of the world’s most comprehensive, contentious and complex pieces of environmental legislation, and FWS is, right now, inviting public comment as to how Candidate Species’ conservation could be improved.