In keeping with its track record as an innovator of carbon markets, the World Bank recently launched the BioCarbon Fund, a fund designed to deliver cost-effective certificates of emission reductions while promoting additional social and environmental benefits, including land restoration, biodiversity conservation, and the improvement of local livelihoods. Benoit Bosquet tells us about this new fund and about some of the lessons the World Bank has learned in its four years of experience with carbon markets. 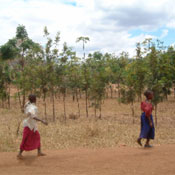 In keeping with its track record as an innovator of carbon markets, the World Bank recently launched the BioCarbon Fund, a fund designed to deliver cost-effective certificates of emission reductions while promoting additional social and environmental benefits, including land restoration, biodiversity conservation, and the improvement of local livelihoods. Benoit Bosquet tells us about this new fund and about some of the lessons the World Bank has learned in its four years of experience with carbon markets.

Four years ago, the World Bank embarked on an interesting and innovative journey designed to stimulate and catalyze the emerging markets in carbon credits. First, the Bank helped create Prototype Carbon Fund (PCF), a leader in the field whose capital of US$ 180 million is today almost totally committed. Since then the Bank has been involved in the creation of the Netherlands Clean Development Facility, the Community Development Carbon Fund, the Italian Carbon Fund, and, as of May, the BioCarbon fund. A new facility created by the government of The Netherlands will become operational by mid-2004 and be co-managed by the World Bank and the International Finance Corporation. All together the World Bank is managing about US$ 410 million in carbon funds, a volume which is expected to grow to over US$ 500 million within a year as existing funds develop and new funds come on line. All the funds are featured at www.carbonfinance.org. Created by private companies and governments and administered by the World Bank, these funds invest in projects that mitigate climate change in client countries of the World Bank. Acting as a trustee on behalf of the contributors (called Participants), the Bank buys a volume of greenhouse gas emission reductions (also referred to as "carbon credits"). These emission reductions can either be used to help companies and governments meet their obligations under emerging regulatory regimes (e.g. the UN Framework Convention on Climate Change, UNFCCC, and its Kyoto Protocol) or can be traded on the emerging carbon markets. All credits come from projects undertaken in the framework of the Clean Development Mechanism (CDM) in developing countries or Joint Implementation (JI) in countries with economies in transition. Each fund has a different set of private and/or public Participants, its own specific objectives, project portfolio criteria, and a separate governance structure. The funds only pay for the credits when the emission reductions are verified or, in the case of the BioCarbon Fund, when it is established that the tons of carbon have effectively been sequestered in vegetation or in the soil.

What sets the BioCarbon Fund aside as a trail-blazing and far-reaching initiative is that it is aimed at catalyzing "sinks projects", i.e. activities which sequester and conserve carbon in ecosystems and agriculture, and which are also referred to in Kyoto jargon as projects related to land use, land-use change and forestry (LULUCF). Although land-use changes are responsible for roughly 20 percent of global greenhouse gas emissions and one-third of total greenhouse gas build-up in the atmosphere, the use of LULUCF for mitigating climate change has been the subject of heated controversy. As a result, very few LULUCF projects have been undertaken to date. Despite a flurry of activity in the years 1996-1999, the share of LULUCF in total volume of carbon transacted between 2000 and 2003 was merely 9 percent, and only 7 percent when the last two years -2002-2003- are considered. The declining role of sinks and sequestration in carbon markets is due in large measure to the opposition of a number of environmental NGOs, which have been concerned with the potential social and environmental risks of the use of carbon sinks to meet Kyoto obligations. Now that the Parties to the UNFCCC have effectively addressed these risks and provided some guidance on the matter (see below), we believe the market for sinks is likely to grow. This could be good news for people living in rural areas throughout the developing world since, for them, sinks are really the only available entry into the carbon market. The reality is that though people living in rural areas lack the energy infrastructure to participate in the CDM, they nonetheless manage large natural resource bases -most notably land and forests- and their land use decisions can have large impacts on the global climate. For example, conversion of forest to agriculture releases carbon to the atmosphere, while afforestation of degraded agricultural land sequesters carbon out of the atmosphere and stores it in vegetation and soils. For these populations, payments per ton of carbon not emitted or sequestered can create incentives to improve land and forest management, with resulting benefits for both the local and global environments (e.g. reduction of soil erosion, habitat restoration), as well as significant improvements in people's livelihoods (e.g. higher soil fertility, adoption of new techniques).

The BioCarbon Fund was officially opened to Participant contributions in November of 2003, and started operations in May of 2004 with capital of US$ 12.5 million contributed by the governments of Canada and Italy, Okinawa Electric, Tokyo Electric, and Eco-Carbone, a French project developer. It is expected that the capital will grow to US$ 20-30 million by the end of 2005. The BioCarbon Fund is attractive to companies and governments in search of affordable ways to meet their obligations under cap-and-trade regimes, as well as to trading and financial institutions for the following reasons:

CoP9 and the Permanence Question

Clearly the issue of using sinks and sequestration to meet climate change obligations is a thorny one. In particular, the challenge for sinks is to prove that they can be sustained in the long term -to become "permanent"- and have a climate impact that is truly equivalent to that of emission reductions from energy projects. This issue was partially resolved at the 9th Session of the Conference of the Parties to the UNFCCC (CoP9), which took place in December 2003 in Milan, Italy. To a certain extent, the draft decision reached at CoP9 confirms what the World Bank had anticipated in designing the BioCarbon Fund: the need to manage the risk of non-permanence by relying on credits which have a validity limited in time and are periodically verified. Specifically the rules resolve the controversial permanence issue by allowing credits for afforestation and reforestation projects for up to 60 years, subject to verification and certification of continued storage of carbon every 5 years. In a way, the CoP9 decision is more favorable than anticipated, since earlier proposals limited the validity of temporary credits from 5 to 35 years maximum. An important aspect of the CoP9 decision is that it focused the minds on the endgame, on the need to replace the temporary credits at a maximum of 60 years. Would the buyers of temporary credits through the BioCarbon Fund have to replace their credits, thereby endorsing an open liability and the need to purchase the same credit twice? If so, would the price per ton remain affordable? To manage this replacement risk, the BioCarbon Fund will cover the eventual replacement of the temporary credits by the purchase, on a cash forward basis, of certificates of permanent emission reductions generated from energy projects in World Bank-managed carbon funds other than the BioCarbon Fund. By paying a low price upfront for the delivery of permanent emission reductions after 2012 (there is not yet a market for such emission reductions), Participants can cover their replacement risk at an affordable cost.

Markets for The BioCarbon Fund

Governments and companies can join the BioCarbon Fund with a minimum contribution of US$ 2.5 million, which is paid either at the time of joining or on a draw-down schedule over about 10 years. Only accredited investors as established by United States securities legislation are allowed to participate. In Europe, the BioCarbon Fund faces the challenge that certificates from CDM and JI sinks projects are excluded from the European Trading Scheme (ETS) until 2008, so demand is limited (see article on EU ETS here ). Nonetheless, the ETS does not cover all sectors and may not be sufficient for Europe to meet its commitments under the Kyoto Protocol. Complementary action will almost certainly be needed if Europe is to meet its obligations. And to do this, European governments are allowed to use CDM and JI sinks to fulfill their Kyoto obligations. For this reason, it is expected that several European governments will find the BioCarbon Fund an investment of choice. In Japan the World Bank is marketing the BioCarbon Fund in collaboration with two agents, Natsource Japan and Mitsui/CO2e.com. Beside Okinawa Electric and Tokyo Electric, other companies have expressed interest in participating in the fund and are reviewing the legal and financial documents. These include Chugoku Electric, Fuji Photo Film, Hokkaido Electric, Idemitsu Kosan, Kyushu Oil, Japan Energy, NTT Data and Tohoku Electric. By contrast, the BioCarbon Fund has not made any significant inroads into the North American markets, principally due to the rejection by the United States of the Kyoto Protocol, and the remaining uncertainty as to how Canada plans to meet its Kyoto targets. This fact notwithstanding, we believe that initiatives like the BioCarbon Fund will in the future become increasingly important ways for companies and governments to mitigate climate change at a cost that is affordable, and in a way that is respectful of people and the ecosystems to which they belong.

Beyond BioCarbon: The Lessons Learned

By being innovative, taking risks, and helping catalyze initiatives such as the BioCarbon Fund, the World Bank has been instrumental in pushing the envelope of carbon finance. In doing this, we have learned many lessons about carbon finance. These include:

More information about the BioCarbon Fund and the other World Bank carbon finance activities can be found at www.carbonfinance.org or by contacting Ms. Anita Gordon, Senior Communications Officer, at [email protected]. Benoí®t Bosquet is Senior Natural Resources Management Specialist at the World Bank's Carbon Finance Business