The US Environmental Protection Agency has long responded to violations of the Clean Water Act by issuing administrative compliance orders, which can’t be challenged until the EPA initiates enforcement actions. But last week the Supreme Court found in favor of an Idaho couple who argued that they shouldn’t have to wait til enforcement to get their day in court. 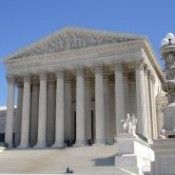 The US Environmental Protection Agency has long responded to violations of the Clean Water Act by issuing administrative compliance orders, which can’t be challenged until the EPA initiates enforcement actions. But last week the Supreme Court found in favor of an Idaho couple who argued that they shouldn’t have to wait til enforcement to get their day in court.

26 March 2012 | Last week, the Supreme Court in a unanimous decision found the case Sackett v. EPA in favor of Idaho couple Chantell and Michael Sackett, asserting that when it comes to wetlands, “arbitrary and capricious” compliance orders can indeed be challenged in court without having to wait for the Environmental Protection Agency to take enforcement action.

It’s a case that turns on somewhat obscure questions about administrative procedure – but it will have ramifications for wetlands protection across the United States. At issue isn’t whether the Sackett’s property is or is not a wetland, but how the  US Environmental Protection Agency (EPA)  responds to what it percieves as damage to wetlands.

Michael and Chantell Sackett say they had no intention of making a federal case out of anything when they started building a house on a half-acre lot near Priest Lake, Idaho, in 2007. The EPA, however, says the couple dredged and filled in a patch of wetland without a permit – a clear violation of the Clean Water Act.

The agency sent the couple an “administrative compliance order” in November 2011 requiring them to halt construction and restore the land to its earlier state. The couple contested the EPA’s assessment, pointing out that land wasn’t wet, but dry – as wetlands often are. The EPA responded by offering them extra time to comply, relaxing its stringent restoration requirements, and offering to work with the couple – although it’s not clear how far the EPA was willing to go.

The Sacketts, for their part, didn’t wait to find out. They chose instead to sue the agency, arguing that the cost of getting a dredge-and-fill permit was too high for them to risk going through the process only to be turned down.

By going to court, the Sacketts challenged the way the EPA deals with wetlands across the United States. Normally, when a compliance order is handed down, the recipient has two basic options. One is to comply, which can be costly and time-consuming. The other is to wait for the EPA to sue to enforce the order, at which point the recipient can make his or her case to the judge. The danger of this second approach is that the landowner risks being on the hook for substantial penalties – up to $75,000 for every day that they failed to follow the compliance order.

In a unanimous decision, the Court found in favor of the Sacketts on the grounds that the Administrative Procedures Act did apply in this case. The Sacketts are now free to bring a civil suit against the EPA’s 2007 order over whether their land is, in fact, a wetland.

In his concurrence, Justice Samuel Alito noted that currently, “if the owners want their day in court to show that their lot does not include covered wetlands, well, as a practical matter, that is just too bad. Until the EPA sues them, they are blocked from access to the courts, and the EPA may wait as long as it wants before deciding to sue. By that time, the potential fines may easily have reached the millions.”

Alito also called for clarification of the definition of wetlands under the Clean Water Act, noting that property owners currently are forced to “feel their way” when it comes to compliance.

Still, environmentalists who worried that the case could have large implications for how the EPA handles compliance orders in the future have some reasons for relief at the outcome.

The Court chose to focus whether the Adminstrative Procedures Act applied, not on whether the EPA’s order violated the right of due process – a much more narrowly interpreted decision.

And though the Sacketts are now free to bring a civil lawsuit against the EPA, they could very well lose it, depending on whether the land in question is ultimately found to be wetlands. While property owners now have legal cover to seek judicial review on a compliance order, this doesn’t mean that compliance or financial penalties can be delayed.

It’s also unclear how many property owners in the future will choose to use their ‘day in court’; given ongoing uncertainty around the definition of wetlands and the huge financial penalties involved , many may opt for immediate compliance.

Read analysis at the SCOTUSblog . The blog has also posted links to filings from several parties, which we’ve posted below.

Merits Briefs for the Petitioners

Amicus Briefs in Support of the Petitioners

Amicus Briefs in Support of Neither Party

Merits Briefs for the Respondents

Slayde Hawkins, Hannah Kett, Steve Zwick and Genevieve Bennett all contributed to this article. Steve Zwick can be contacted at [email protected]