The US Environmental Protection Agency has been giving citizens a chance to say what they believe regulations for existing power plants should look like. Those regs are due in June 2014, and a key question the EPA will have to answer is whether its rules will carve out a place for market-based carbon emissions reduction programs already implemented in 10 US states. 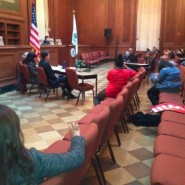 The US Environmental Protection Agency has been giving citizens a chance to say what they believe regulations for existing power plants should look like. Those regs are due in June 2014, and a key question the EPA will have to answer is whether its rules will carve out a place for market-based carbon emissions reduction programs already implemented in 10 US states.

13 November 2013 | WASHINGTON, DC | At the US Environmental Protection Agency’s (EPA) headquarters here, people approach the table two-by-two. It’s a bit like Noah’s Ark, except that the pairs are mismatched: a retired climate scientist and a high school senior; a father and a bird enthusiast; a coal lobbyist and a non-profit leader.

Speaking before three mostly poker-faced agency representatives, every person has a timed three minutes to make their case.

“I’m speaking for myself today as well as my grandchildren,” says Richard Ball, who worked on the International Panel on Climate Change’s (IPCC) first and second assessment reports, to preface his statement that power plants are capable of greater emissions reductions than any other sector.

The scene is part of the “listening sessions” that have occurred in 11 cities across the United States as the EPA seeks public feedback about the best way to regulate greenhouse gas emissions from existing power plants under the Clean Air Act. A 2007 Supreme Court case, Massachusetts v. EPA, defines greenhouse gases as pollutants, giving EPA the obligation to regulate them if it finds they pose a threat to public health or welfare, which it did in December 2009. The EPA released its proposed regulations for new power plants in September 2013. Now, under the timeline laid out by President Barack Obama earlier this year, it’s expected to propose standards for existing plants by June 2014.

Under the Clean Air Act, the what of the regulation is up to the EPA while the how is up to the states. Once the rules come out, states will submit plans outlining how they plan to meet them and states that have implemented market-based mechanisms are lobbying for their programs to be included as a compliance option under the new federal rules.

A Case for State Innovation

Mridul Chadha, the head of news and data at Climate Connect, makes the case that state-level carbon policies have already made a huge dent in the emissions intensity from power plants, during a November 7 webinar on the regulations organized by CaliforniaCarbon.info.

The average emissions intensity for a U.S. power plant was 1,216 pounds of carbon dioxide per megawatt-hour limit (lb CO2/MWh) in 2009, down 11% from 2004, according to Chadha’s calculations. As cheaper natural gas-fired generation replaced coal during this timeframe, the share of coal-based generation fell in all but four states, and the emissions intensity numbers have dropped along with them.

However, while economics explains some of the shift to natural gas, Chadha found that seven of the 11 states that most dramatically decreased the average emissions intensity of their electricity generation had implemented some kind of price on carbon, either through the Regional Greenhouse Gas Initiative (RGGI) or California’s cap-and-trade program. RGGI-member Vermont topped the list with a 69% decrease in emissions intensity.

“We can see that the states that have implemented a price on carbon have seen a reduction in coal-based power plants,” Chadha said.

The good track record of the RGGI states and California in eking more electricity generation out of fewer emissions may prompt other states to look towards market-based mechanisms as they draft plans to meet the new regulations.

Tom Lawler, the DC representative for the International Emissions Trading Association, expects states to propose cap and trade and bottom-up linkages with existing programs. “When EPA comes up with its guidelines, I fully expect and hope that more states will step up and say they want to link up with RGGI states or California as their way of complying with the EPA regs,” he says.

Whether the regulations for existing power plants will match those for new ones is yet to be determined, but the numbers indicate that further regulation could accelerate the U.S.’s shift away from coal. Currently, the average emissions intensity of coal-fired plants in the United States is 2,249 lb CO2/MWh – well above the proposed regulation – while at 1,135 lb CO2/MWh, the average natural gas plant is already close to the legal limit for new generation.

Some in the industry hope that carbon capture and storage (CCS) could eventually make new coal-fired generation viable under the regulation, but so far no U.S. power plant has implemented commercial-scale CCS. And, as Lawler points out, getting individual coal plants into compliance without CCS could be difficult: “There is only so much one can do from an engineering perspective to improve the efficiency of a power plant – maybe 8% to 9% improvement.”

So, in the absence of commercially viable CCS, will states turn to market-based mechanisms to meet carbon regulation? Such a systems approach would cap emissions on the state or even regional level rather than on the scale of individual power plants.

Jon Costantino, a senior advisor at law firm Manatt, Phelps & Phillips, thinks states will push for a market-based approach to the regulation that zooms out from the individual power plant to consider emissions reductions across the system. As previously covered in Ecosystem Marketplace, the RGGI states already are advocating for this idea. “EPA doing a direct command and control is probably not going to be the preferred alternative,” Costantino said.

Sorting out the System

A systems-based approach would raise some interesting questions. For instance, under RGGI, could a coal plant closure in Connecticut count towards emissions reduction in Massachusetts? How can cap and trade in California, which covers large industrial facilities and fuel distributors as well as electricity generators, establish equivalency? In other words, how can the state parse out emissions reductions from its power sector to prove that its plants meet the electricity sector-specific regulation? Will states be able to use offsetting as a tool to meet regulation? (Probably not, as Ecosystem Marketplace’s previous coverage suggests.)

The EPA will have the last word on answering these questions, but for now, they’re all ears. The agency’s 11-city listening tour concluded last week, but written comments can still be submitted.